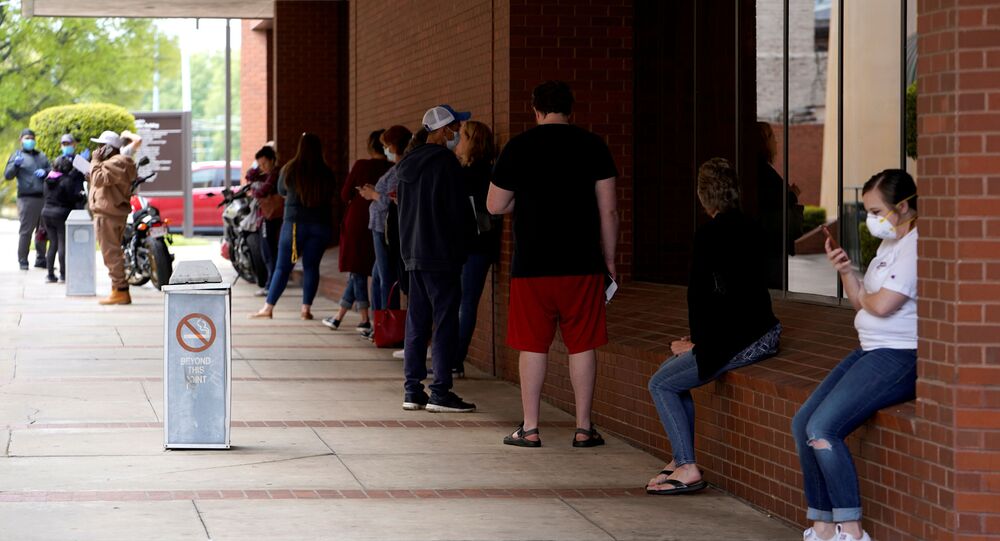 Data released by the US Bureau of Labor Statistics (BLS) on May 14 showed that the US unemployment rate has skyrocketed to 15.7%. However, Trudy Goldberg, chair of National Jobs For All Coalition, told Radio Sputnik Thursday that the true unemployment rate is closer to 26%.

The Labor Department on Thursday reported that workers have filed nearly 3 million new unemployment claims in just the last week amid the COVID-19 pandemic.

The recent data comes after the BLS on May 8 reported that 20.5 million US jobs were lost in the month of April alone. The Labor Department’s latest data, which includes the week that ended May 9, brings the total number of unemployment claims in the last two months to 36.5 million.

“I guess the really important thing is that essentially the current stimulus and support of working people is modest,” Goldberg, who is also professor emerita of social policy at Adelphi University, told Political Misfits hosts Bob Schlehuber and Jamarl Thomas, “but those are going to expire at the end of July, and of course, many people are not getting their benefits.”

Goldberg noted that filling out the application is no guarantee one will receive the prescribed benefits. “In fact, a much more efficient way of dealing with it would be with job retention schemes that are being implemented in other places where people are essentially kept on the payroll,” she noted.

Under job retention schemes, governments make grants to employers to cover a percentage of employee wages so that companies can keep people on payroll who would otherwise have to be laid off because of the pandemic. One such program was implemented by the Venezuelan government in March, with Caracas picking up the bill for smaller businesses in order to ensure their workers remain on the payroll even while confined by stay-at-home orders.

“The official unemployment rate is always only a portion of all of the people who are really jobless, because in order to be counted as unemployed, you have to - listen to this narrow definition: Work less than one hour a week in paid employment and be actively looking for a job during the time that the data was collected,” Goldberg explained.

Goldberg noted that many people who are now working part-time but would like to work full-time should also be considered unemployed, as well as millions of people who want a job but are not actively seeking one due to the current circumstances which make it unsafe to go out and search for employment.

“So that brings the number up to something like 26% instead of 14%,” Goldberg explained.

According to the BLS website, “people are classified as unemployed if they do not have a job, have actively looked for work in the prior 4 weeks, and are currently available for work.

Goldberg also noted that unemployment may be undercounted by the BLS because after the data is collected, job losses can continue to increase. “Now, usually there isn’t that big a surge between the data collection and the time they’re reported early in the next month. But that would be the case now,” she explained.

“This crisis is really unmasking the underlying inequities. We are a country that was ill-equipped to deal with a pandemic because of the underlying unemployment, the affordable housing crisis, the lack of health care for so many. And of course as people lose their jobs, they are losing health care, which is another reason why one could question tying health care coverage to employment. In a sense, we hope that the crisis is going to give us an opportunity to deal with these underlying inequities that are certainly masked,” Goldberg noted.

In late March, the Federal Reserve Bank of St. Louis predicted that the US unemployment rate could skyrocket to 32% by the end of June, a number even greater than the estimated 25% reported during the Great Depression, the most devastating economic downturn in the history of the industrialized world, which lasted from 1929 to 1939.