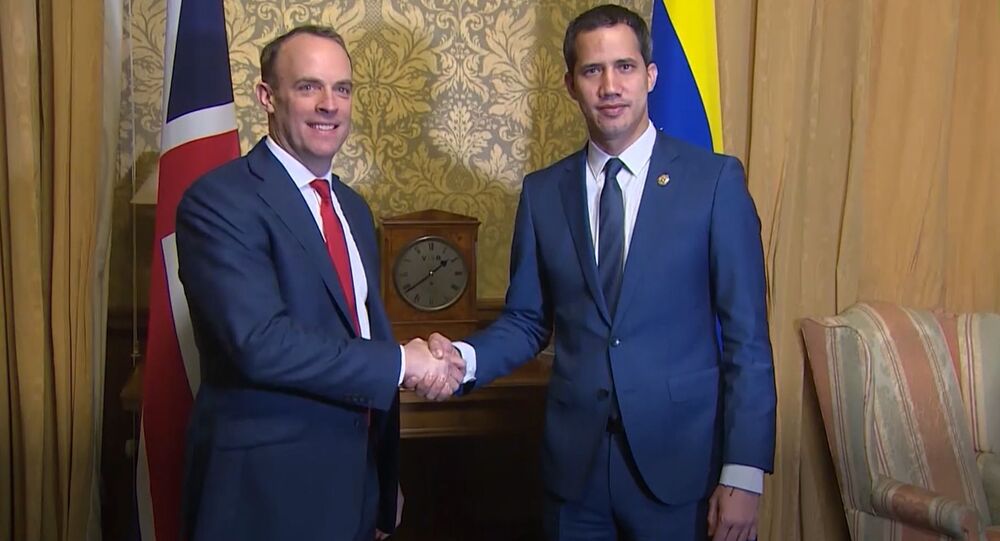 The British government has openly allied with the US in backing Venezuelan opposition leader Juan Guaidó's self-appointment as interim president. But newly obtained government documents by a UK-based investigative journalist reveal a much deeper relationship with members of the coup-government-in-waiting.

John McEvoy is an independent journalist who has published in the International History Review, The Canary, Tribune Magazine, Jacobin, Declassified UK, Brasil Wire among other publications. He reported from Venezuela during the coup efforts in 2019, from Colombia during the student protests the same year and from France in 2020 on the Yellow Vests movement and general strike.

Sputnik: You recently published an exposé revealing the existence of a secret unit working within the UK Foreign Office that was liaising with elements of the Venezuelan opposition.

What exactly did you discover?

John McEvoy: I discovered a Foreign & Commonwealth Office (FCO) Unit named the Venezuela Reconstruction Unit, which hadn't previously been acknowledged by either the government, the diplomat involved, nor the Venezuelan opposition, with whom the unit has collaborated.

It was also found that Juan Guaidó's representative in the UK, Vanessa Neumann, had spoke with FCO officials about the sustenance of British business interests in Venezuela's 'reconstruction'. Given Venezuela sits on the largest proven oil reserves in the world, and Neumann's past links with oil corporations, we can only imagine what this means.

Sputnik: Who are the key players in this unit?

John McEvoy: The only diplomat that we know is involved thus far is John Saville, the former UK ambassador to Venezuela between 2014 and 2017. He's been a diplomat for some decades.

Sputnik: Why is this significant, why should this matter to anyone living in Britain?

John McEvoy: It's obviously important for UK citizens to know what is being done in their name - be it at home or abroad. In the case of Venezuela, which is undergoing a serious political and economic crisis, it's important that UK citizens know how the UK government is contributing to this - through sanctions, partnering with the US in trying to destabilise the country, and in planning for the country's 'reconstruction' following an imagined coup.

When you look at the past record of British destabilisation and 'reconstruction' - in Iraq, Libya, Syria, or Afghanistan, for instance - you get the kind of idea of what might await Venezuela should the government be overthrown. But it's not just about a utilitarian approach, it's also about confronting imperialism. What right does the UK government have in the 'reconstruction' of another sovereign nation?

I'm sure the British population would be alarmed if it were to learn that Venezuela had a specialist unit within its Ministry of External Affairs planning for the 'reconstruction' of Britain.

Sputnik: Did the Foreign Office have an explanation for the existence of this unit?

John McEvoy: The FCO responded in a way that has characterised British public diplomacy over recent years: that they're trying to 'help' Venezuelans resolve their 'appalling political and economic crisis'. Even the smallest understanding of British foreign policy, and the history of British interventions abroad, would lead one to immediately suspect this explanation. That's before considering the numerous different ways in which the British government has joined in with the economic strangulation of Venezuela over the past 16 months - notably in freezing over $1bn worth of Venezuelan gold held in the Bank of England.

These sanctions are even more concerning in light of the current coronavirus - Venezuela is struggling to import vital medication for years. What's more, if the Venezuela Reconstruction Unit is so committed to benign objectives such as democracy promotion and political assistance, it's quite a wonder why they kept silent about it since Autumn 2019.

Sputnik: How would you respond to someone who says that it isn't that big a deal for the UK Foreign Office to have a group of people whose job is to liaise with opposition figures in another country?

John McEvoy: Of course it's within the FCO's remit to liaise with foreign politicians and diplomats. In this case, those with whom it is liaising have been trying to violently overthrow their elected government for the past 16 months (and, in the wider context, since Hugo Chavez was first elected in 1998). The most recent instance came to a head this month when US and Venezuelan mercenaries arrived on the Venezuelan coasts with plans to kidnap the president and gun down "violent colectivos" - which is frequently a code-word for working class, usually socialist communities in Venezuela who support the legitimacy and sovereignty of their government and state.

In March and April 2019, I stayed with the leader of a colectivo in Caracas, Venezuela, for two weeks. This colectivo was dedicated to helping the local children with cultural events and activities - dance, theatre, art, etc. Yet in the international media, colectivos have been comprehensively painted as violent, thuggish supporters of the Venezuelan government. Painting them as 'thugs' or 'terrorists' provides a pre-emptive justification for attacking supporters of the government and those who defend the sovereignty of the Venezuelan state.

What this [recent mercenary] plan entailed was a possible massacre of the Venezuelans who would inevitably come out in defence of the sovereignty of their state. The contract for this operation reportedly bears Juan Guaidó's signature and he is named as the operation's Commander in Chief - and these plans were underway when Guaidó visited the UK in January 2020. This is, therefore, a unique situation - the UK government is collaborating, at the highest levels, with political forces that are involved in what many would describe as terrorism.

Sputnik: Is there anything about their activities that you still don't know that you want to know?

John McEvoy: Yes - another Freedom of Information request has been sent; hopefully there'll be a follow-up article on this latest piece.