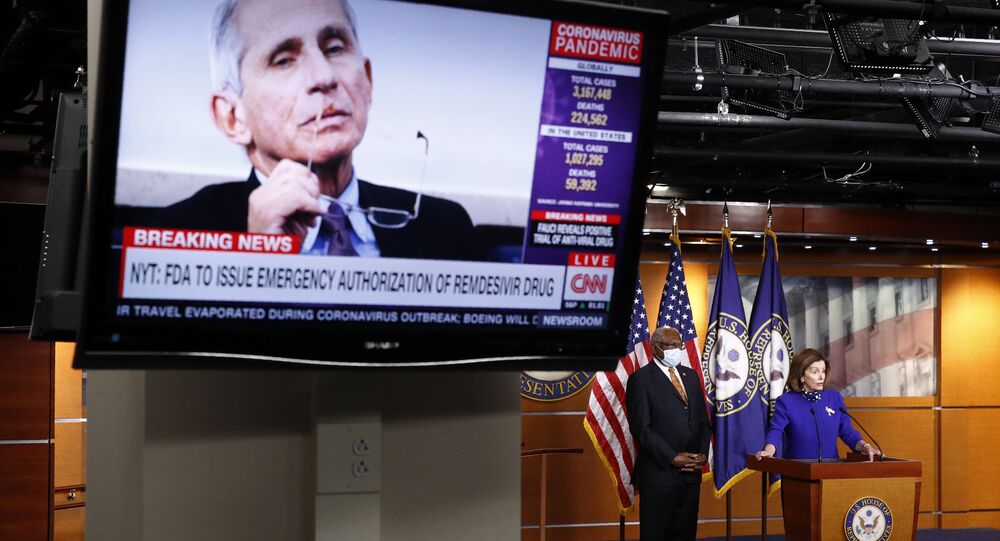 When Dr. Anthony Fauci, a leading member of the US’ Coronavirus Task Force, testified before lawmakers on Tuesday, Republicans who previously criticized him proved conciliatory. Joel Segal, co-author of the original Medicare for All bill, told Sputnik they know Fauci is the last voice of reason who can “counterbalance the insanity of Donald Trump.”

“What I’ve expressed then and again is my concern that if some areas, cities, states or what have you jump over those various checkpoints and prematurely open up without having the capability of being able to respond effectively and efficiently - my concern is that we will start to see little spikes that might turn into outbreaks,” Fauci told lawmakers. He later added that “the idea of having treatments available or a vaccine to facilitate the reentry of students into the fall term would be something that would be a bit of a bridge too far.”

Segal, who also serves as the executive director of the Justice Action Mobilization Network and national director of the COVID-19 Emergency Response Group, told Radio Sputnik’s Political Misfits Tuesday, “What he [Trump] cares about is one thing: he thought he could win his reelection by saying we had a 3.5% unemployment rate, the lowest rate in years.”

“Now we have 30 million people out of work and more, so he just wants … to show that he’s putting the nation back to work, because he’s failed at everything else that he’s done, he’s failed on COVID-19, so maybe he can win on something. It’s the most reckless policy I’ve ever seen. I called it the ‘Bataan Death March,’” Segal told hosts Bob Schlehuber and Jamarl Thomas about Trump’s plan to end lockdowns sooner rather than later.

“It’s so reprehensible and beyond the pale.”

While Fauci sparred with some figures in Trump’s Republican Party, such as Kentucky Senator Rand Paul, who dismissed the scientist’s conclusions by saying, “I don’t think you’re the end-all,” Fauci also extracted concessions from other GOP lawmakers that Trump’s much-touted COVID-19 testing achievements have left much to be desired.

“What our country has done so far in testing is impressive but not nearly enough,” HELP Committee chair Tennessee Senator Lamar Alexander said in the hearing.

“Yesterday, you celebrated that we had done more tests and more tests per capita even than South Korea,” Utah Senator Mitt Romney said to Assistant Secretary for Health Adm. Brett Giroir, who heads testing on Trump’s task force. “But you ignored the fact that they accomplished theirs at the beginning of the outbreak, while we treaded water during February and March.”

Segal told Sputnik the “Fire Fauci” Republicans who had previously called for the NIH researcher’s head backed off from their positions during the hearing because “a lot of the Republicans realized that [if they] ‘Fire Fauci,’ there goes the voice of the people, there goes the voice of science and public health … and that many of their own constituents would also die as a result of not having a Fauci there to counterbalance the insanity of Donald Trump.”

“Frankly, I think people now are really getting fed up and they’re starting to see all this, and people are finally waking up and realizing that we have an old system with old people who are running it,” the longtime legislative assistant said.

“We need a new system with progressive younger people, especially of color, running it, which is why I stayed in Congress for all the years that I did. I saw this sort of streak in people to sacrifice human beings for profit.”