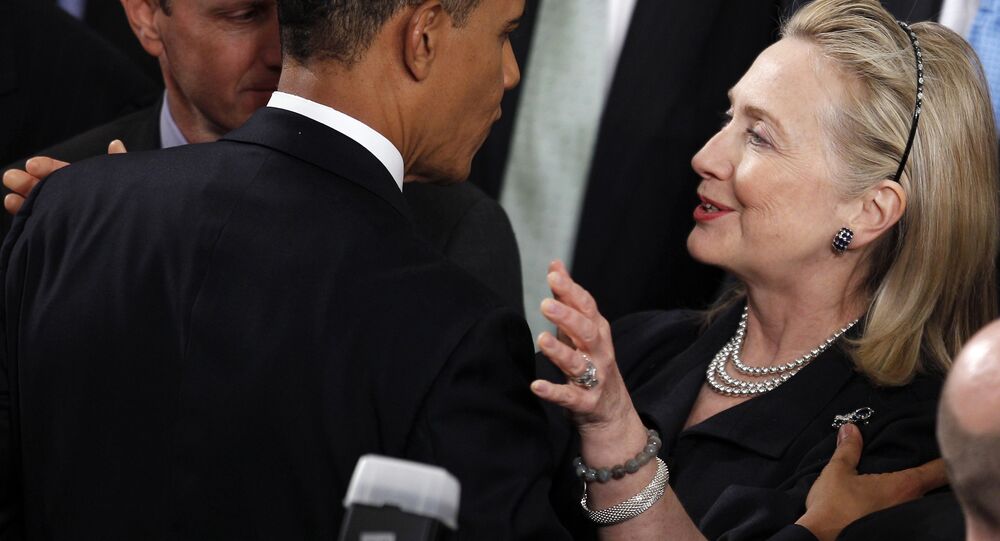 Spygate: Why Did Hillary Clinton & Barack Obama Seem So Determined to Impede and Topple Trump?

US Attorney John Durham who is currently conducting an investigation into the origins of the Trump-Russia probe should take a look at a role played by Hillary Clinton and the Clinton Foundation in sparking and fanning the Russiagate scandal, says Wall Street analyst Charles Ortel.

The newly released House Intelligence Committee's transcripts shed some more light on Joseph Mifsud, the mysterious Maltese professor who apparently told then Trump campaign aide George Papadopoulos in March 2016 that Moscow had "damning" Hillary Clinton emails. According to one of the transcripts, Mifsud was heard bragging he was a member of the Clinton Foundation.

​Additionally, in a November 2017 interview with Italian newspaper La Repubblica the Maltese professor also admitted that he was in the organisation: "I am a member of the European Council on Foreign relations and you know which is the only foundation I am member of? The Clinton Foundation". At the same time, Mifsud flatly denied that he had told Papadopoulos about the Clinton emails.

The exposure has prompted a lively debate among social media users, who recollected that following the controversial conversation with Mifsud, Papadopoulos had a drink with the Australian high commissioner to the UK Alexander Downer, also known for his ties with the Clinton Foundation.

Coincidence or collaboration to overthrow a duly elected POTUS?

​Following this historic meeting Downer approached the FBI to inform the bureau – in a breach of diplomatic protocols – that Papadopoulos somehow knew that the Russians "had dirt" on Hillary Clinton. This information became the trigger for launching the Crossfire Hurricane op against the Trump campaign on 31 July 2016.

"Mifsud was a small donor according to notoriously unreliable and materially false disclosures on the Clinton Foundation website", says Charles Ortel, a Wall Street analyst who has been looking into the Clinton Foundation's alleged fraud for several years. "I suspect he may have been involved with the 'Clinton Global Initiative', a forum where Clinton supporters (for the most part) interacted with connected globalists, in theory to promote smart giving, but in practice to advance substantial for-profit activities".

Ortel expresses hope that US Attorney John Durham and his team appointed by AG William Barr to investigate the origins of Crossfire Hurricane operation "will examine Mifsud and every person and project claimed in particular by CGI, which seems to have been a forum where money traded for influence while hiding in plain sight".

Former Australian diplomat and politician Downer seems to be a bigger fish, according to the analyst.

"As Australia's foreign minister, Downer channeled millions of his taxpayers' money towards international projects in the name of 'Clinton HIV/AIDS Initiative' (and similar sounding variants) as well as 'Clinton Climate Initiative' starting in 2006", Ortel elaborates. "None of these entities lawfully existed. And there has never been a proper accounting for these grants. Moreover, Downer and Australia signed multiple agreements with Bill Clinton and Ira Magaziner who held themselves out to be lawfully appointed representatives of the Clinton Foundation when they never were".

According to the Wall Street analyst "Downer had and has much to lose from a Trump victory, so it is not surprising that he has apparently played such an important role attempting to frame Donald J. Trump and others who threaten to expose and punish crony globalists".

"From the day Hillary announced her second presidential run, she and her backers did all they could to rig the primaries and then the general election", he says. "Downer's known and suspected actions, like Mifsud's are not surprising. They likely gained and thought they would gain more from another Clinton presidency".

Clinton Knew That Her Campaign Funded Dirt Digging on Trump

Hillary Clinton had either direct or indirect ties with many participants of the Trump-Russia saga, including Mifsud and Downer who initially sparked the so-called Russiagate scandal and Fusion GPS, the firm behind the infamous anti-Trump "dirty" dossier which played a crucial role in "justifying" FBI surveillance operations against Trump aides.

Citing newly released testimonies, American investigative journalist John Solomon reported on 11 May, that Clinton campaign chairman John Podesta and Hillary Clinton had been aware that her campaign had funded opposition research and sought for dirt on Trump's ties to Russia during the 2016 election.

Ortel is not surprised that Hillary Clinton appears to be deeply involved in how the Trump-Russia investigation started. According to him, the roots of the "Clinton corruption run deep", starting in Arkansas where Bill Clinton served as a governor and attorney general.

"Once the Clinton's moved to the White House, the scale of their corrupt and suspicious activities expanded to the national and international stages", the Wall Street analyst presumes. "From 1997 onwards, a key instrument in swapping cash for influence has been the network of Clinton 'charities' that has never been properly regulated anywhere".

He suggests that if one wants to understand why Hillary Clinton and Barack Obama seemed so "determined to impede or topple President Trump", "Durham and his team must go back into history comparing sums that donors claim they sent towards the Clinton Foundation, with the Foundation's public filings, submitted many places, under penalties of perjury".

"Unlike the botched attempts to set perjury traps against Flynn and others, the Clinton Foundation public record, evident in plain sight includes multiple confessions of making false statements under oath", the analyst highlights. May the long overdue indictments, prosecutions, convictions, fines and incarcerations soon begin".