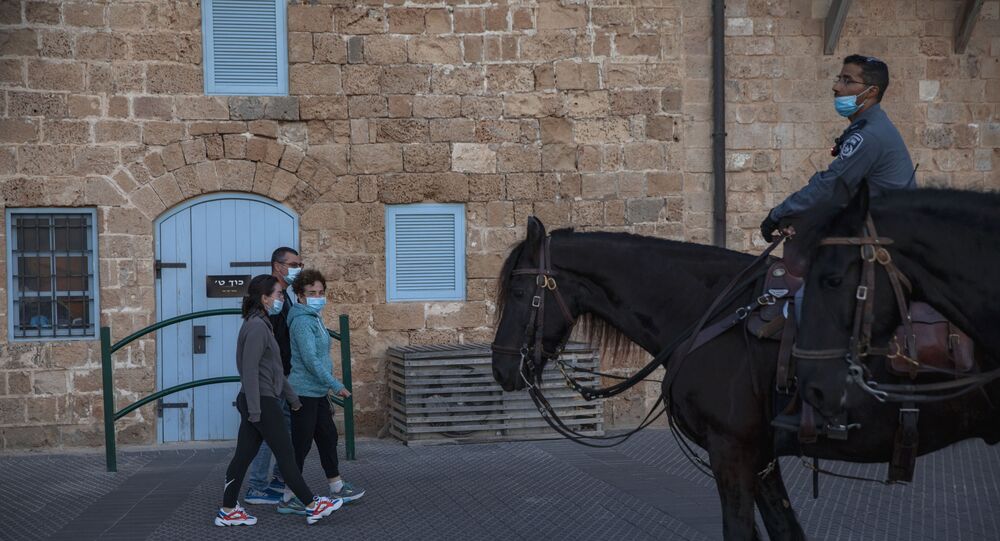 Preparing for the Day After: COVID-19 Poses Threats but Israel is Ready to Seize Opportunities

Despite posing a number of serious challenges like the destabilisation of economies and the end of global cooperation, the crisis caused by COVID-19 harbours opportunities too, says a document compiled by Israel's Foreign Affairs Ministry. These include the curbing of Iran's nuclear programme and a chance to improve ties with the Arab neighbours.

Israel's Ministry of Foreign Affairs has finished working on an inner document that will reach Prime Minister Benjamin Netanyahu, detailing the challenges and opportunities slated to face the Jewish state after coronavirus, which has already claimed the lives of more than 255 Israelis.

Developed by the ministry's policy planning division as well as more than 20 Israeli diplomats, the detailed document analysed various health, political, security and economic aspects of what awaits the Jewish state. It portends doom and gloom for countries that have been greatly affected by the crisis. But it is not limited to them only, and the MFA warns that not a single country will be spared from the repercussions of the crisis caused by the pandemic.

"We cannot ignore the fact that it is a world crisis, not only because of the health implications but also because of the way it impacts the global economy," said Uri Resnick, director of the policy planning and assessment department of Israel's MFA.

"If we compare the current situation with other upheavals like the one the world experienced in 2008 or the Great Depression of the 1930s, we can safely say that the current crisis tilts towards the latter," he added.

National economies throughout the world have already shown that they are moving in that direction. Only recently, the World Trade Organisation projected a negative growth rate of nearly nine percent for 2020 as a worst-case scenario.

Their projections for the volume of trade of goods and services were even more dire. Basing their conclusions on the average exchange of exports and imports, the WTO predicted a decline of up to 32 percent by the end of the year, the starkest decline in this figure in many decades, even compared to the crisis of 2008.

The dire economic situation, coupled with the need for health solutions, has already created a situation where countries are competing for medical equipment in a bid to curb the spread of the virus. Israel's MFA believes this situation will only deteriorate with time, leading to the end of the concept of a 'global village' as we know it.

Deterioration might also be seen in conflicts that erupted long before the outbreak of the pandemic, that has seen more than four million people infected.

One such case is the tense relationship between China and the US; the two countries have been in a bitter trade battle for years now. Another example is the confrontation between Israel and Iran.

One of the countries that has been greatly affected by the pandemic is the Islamic Republic of Iran, where the economy has been crippled by the heavy economic sanctions imposed by the US. Tehran might opt to now focus on throwing all of its energy into the development of a nuclear bomb, thus provoking fears in Israel that such weapons will be used against its citizens.

However, Resnick is certain that Iran will struggle to stay afloat. "The country's economy has suffered various setbacks, even before the outbreak of the virus. While they managed to handle these problems before, it is highly doubtful they will be able to do so now when prices on oil continue to drop.

© AFP 2021 / ABBAS MOMANI
Israel 'Too Weak' to Take on Iran as it Continues to Cement its Presence in Syria - Military Expert
In recent days, Israeli media circulated reports suggesting the pandemic, that has forced Iran to inject billions of dollars into stabilising the economy, has led Tehran to reconsider its Middle East policy, forcing the Islamic Republic to evacuate several of its bases in Syria and shrink the number of military personnel positioned there.

"Israel has never hidden the fact that it supports the pressure put by the American government on Iran in an attempt to make the Islamic Republic change its approach and cut off its financial support to such terror organisations as Hezbollah [in the north - ed.] and Hamas [in the south - ed.]. Under the current conditions, we don't see that this trend of pressure will decrease," explained Resnick.

On THE Agenda: Better Ties with Neighbours

But curbing the threat of Iran is far from being the only area where Israel can benefit from the current crisis, believes the MFA.

"The pandemic doesn't recognise borders so it might underline the common challenges instead of putting emphasis on differences and that might prompt the countries of the Middle East to cooperate with the Jewish state," said Resnick.

One step in that direction was taken in April, when Israel supplied Jordan with 5,000 protective masks as the number of coronavirus patients in the kingdom continued to climb.

© REUTERS / IBRAHEEM ABU MUSTAFA
Hamas is Struggling to Keep COVID-19 at Bay, Slams Israel for Outbreak on the Strip
Similar measures have also been taken towards the Hamas-controlled Gaza Strip, with Tel Aviv supplying the enclave with more than a thousand medical examination kits and hundreds of hazmat suits.

However, the Jewish state aims higher, and is determined to establish and improve ties with nations that currently don't maintain diplomatic ties with Tel Aviv.

"Apart from offering medical and high-tech solutions, Israel's industry and technology can also be an answer for many Middle Eastern countries that seek to improve their agriculture. In the past, many projects have fallen through due to the Arab nations' reluctance to cooperate with us. Now, however, the new reality might change that equation," Resnick summed up.