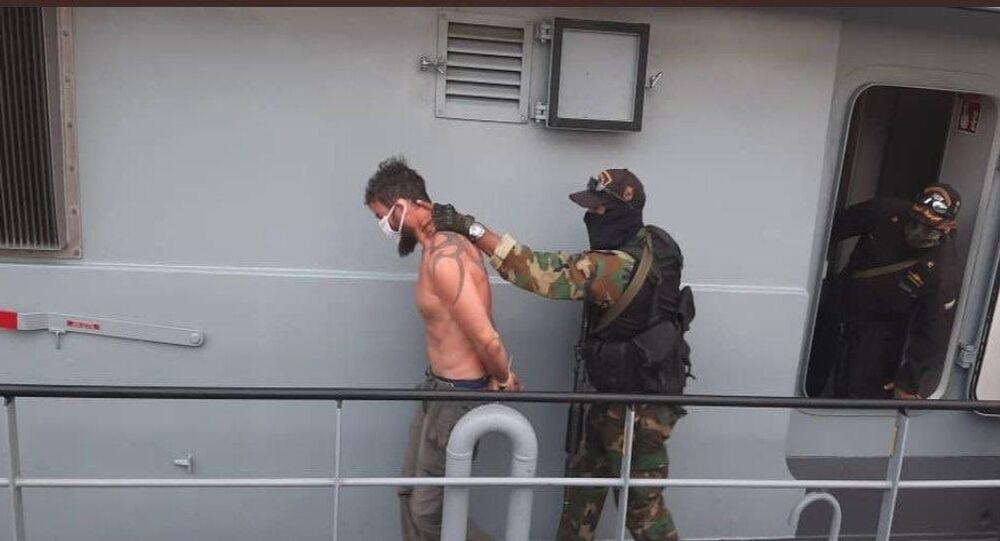 On 3 May, the Venezuelan Armed Forces thwarted an amphibious mercenary operation and captured 13 individuals including two American citizens. As it turned out later, the botched naval raid was part of a broader plan masterminded by a group of dissident Venezuelan military personnel and the US private military company, Silvercorp USA, to oust Venezuelan President Nicolas Maduro.

US Seeking to Get Rid of Both Maduro & Dissident Chavista Generals

"A brief analysis of the 3 May paramilitary intervention in Venezuela shows that it was an operation patterned after Washington's historic covert operations against the Cuban and Sandinista Revolutions", says Dr Heinz Dieterich, director of the Centre for Transition Sciences (CTS-UAM) and former advisor to President Hugo Chávez.

According to him, "the strategic objective of this armed incursion code-named 'Operation Gideon' was not to 'capture, stop, or eliminate Nicolas Maduro' and instigate a coup" – the real purpose was "to prevent the reconstitution of the Christian-Democratic Chavista movement in Venezuela by eliminating its military action and resistance potential" which includes Venezuelan Major General Cliver Alcala, one of the Chavista generals who broke ranks with Maduro over political disagreements.

A week before the failed amphibious invasion retired Venezuelan Major General Cliver Antonio Alcala Cordones, who was discharged from the army in July 2013 and lived in exile in Colombia, admitted that he was orchestrating a coup plot against Maduro.

Alcala went public after Washington indicted him on narco-terrorism and offered a reward of "up to $10 million" for information leading to his arrest on 26 March 2020. The retired major general resolutely denied the accusation, stressing that he had previously met with US officials on no fewer than "seven occasions".

He also specified that an arms shipment seized by Colombian authorities earlier in the month was intended for the operation.

​"On 24 March, the newspaper El Tiempo published a story about a war arsenal that was seized", Alcala tweeted on 26 March. "These weapons belong to the people of Venezuela and were being transported in Colombian territory to begin liberation by our National Armed Forces".

As the Associated Press revealed on 2 May, Alcala had amassed at least 300 heavily armed volunteers who were expected to stealthily invade Venezuela from the north. The plot was developed together with former Green Beret Jordan Goudreau.

In a 26 March interview with W Radio and in Twitter videos, the retired major general stated that self-proclaimed president of Venezuela, Juan Guaido, and his counterpart Leopoldo Lopez were aware of the operation. He accused the opposition figures of leaking the plan.

"On 26 March, Washington decided to abort the armed resistance project, which Chavista Major General Cliver Alcala was developing in exile, in Riohacha, Colombia, in accordance with Washington and Bogota", the former adviser for Hugo Chavez opines, adding that the next day Alcala "gave himself up to US authorities in Bogota, accepting an offer from Washington to become a witness against Maduro.

​"I am a soldier. Thanks to all those who have given their support today. Always, in my 58 years, I have behaved in accordance with the collective good. This has been very difficult when the most extreme selfishness and anti-values ​​prevail. God knows everything".

Having been left without strategic direction and leadership, the coup d'etat plan morphed into an "amateur operation carried out by bounty hunters, Venezuelan, US political fortune seekers and entrepreneurs, which never had a chance of 'capturing, stopping, or eliminating Nicolas Maduro', in order to collect the US reward of $15 million", Dieterich notes.

While Washington has denied any prior knowledge of the failed amphibious operation, Democratic congressmen on the Senate Foreign Relations Committee are demanding answers from the Trump administration about the raid aimed at capturing Maduro.

"Either the US government was unaware of these planned operations, or was aware and allowed them to proceed. Both possibilities are problematic", a Thursday letter signed by three Democratic lawmakers said, alleging that the failed endeavour ran counter to American support for diplomatic engagement to settle the South American country's political standoff.

Regardless of Operation Gideon's failure and US lawmakers' calls for a peaceful resolution of the Venezuela crisis, Nicolas Maduro is still under threat, Dieterich presumes, referring to Washington's illegal drone assassination of Quds Commander Qasem Soleimani earlier this year. According to the professor, one of the failed operation's tactical goals was to "keep Maduro in limbo" until the US deems fit to try to remove him.