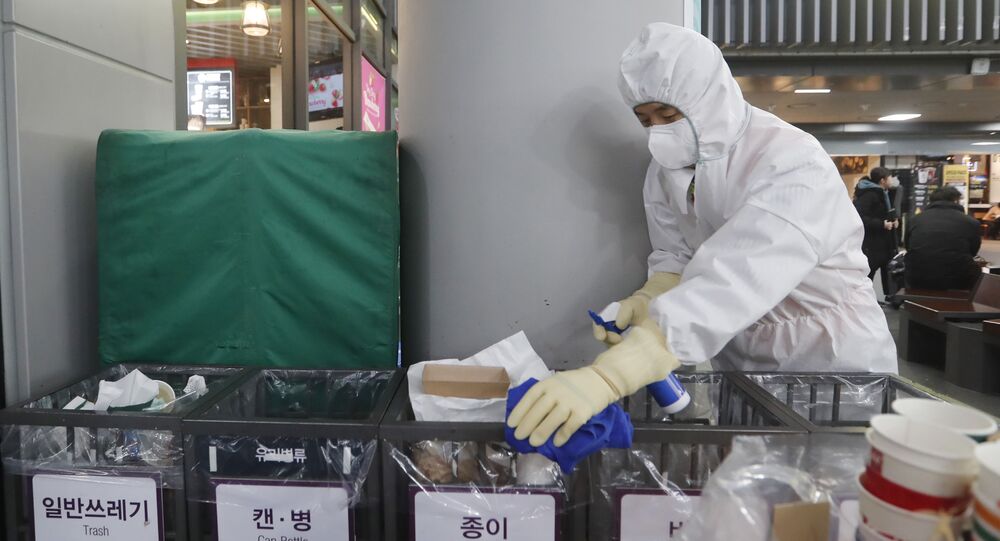 South Korea is looking into cases of potential reinfection after the country largely managed to curb the first wave of the coronavirus pandemic. If short-term reinfection is a truly common thing it may affect reopening strategies and have scary implications, health experts warn, emphasising the need for effective vaccines.

In late April, South Korea's health authorities were stunned as polymerase chain reaction (PCR) tests indicated that some patients who recovered from COVID-19 had apparently failed to acquire immunity and seemingly contracted the highly contagious disease again. However, after weeks of research, the nation's medical professionals put forward the assumption that these test results could be “false positive” because of lingering bits of the virus. As of 7 May, the country had spotted 350 such cases, according to the Korea Centres for Disease Control and Prevention (KCDC).

"The tests that are used to screen populations for the presence of the virus use the technique called reverse transcription-polymerase chain reaction (RT-PCR), that is they amplify a short portion of the viral RNA by a chemical copying process", explains Carol Shoshkes Reiss, a professor of Biology and Neural Science at New York University. "They do not test for infectious virus, just fingerprints that the virus had been present".

A much more sensitive and more labour-intensive assay would be to take the swab and determine if the infectious virus were present (plaque assay) by growing it in susceptible cells in the lab, the professor elaborates.

The confusion over potential reinfection could have been triggered by two possible trivial technical explanations, suggests Danny Altmann, professor of immunology at the Imperial College London:

·         First, many PCR swabs fail cause you don’t get a good sample, so the interim test was a false negative – the person had a single infection throughout.

·         Second, since the PCR detects RNA and not the actual live virus, the second positive test may be picking up a bit of residual RNA from cell debris, not the real infectious virus, i.e. there was no second infection.

Most people are leaning toward the second explanation, that is the second result was a mistake of the assay, Altmann underscores.

"I think that 're-positive' is not reinfection or relapse/re-activation", agrees Seol Dai-wu, an expert in vaccine development and a professor at Chung-Ang University.

The vaccine expert refers to the fact that there were no cases of infection by “re-positive” patients, according to South Korean health authorities. Likewise, "no infectious viruses are detectable in the re-positive patients", he says.

A more cautious approach is demonstrated by Kwon Gye-cheol, chairman of the Korean Society for Laboratory Medicine, who believes that "there are many possibilities and more evidence is needed for a concrete conclusion".

"The Korean CDC is studying patients who recovered and retested positive in various aspects using several methods including viral culture and follow-up of clinical course and surveillance. Because research is underway, clear conclusions have not been drawn yet", he emphasises.

"The knowledge and understanding of this situation is still developing", Dr Keiji Fukuda, director of Hong Kong University's School of Public Health, echoes. He outlines that the trend has been observed not only in South Korea but also in Hong Kong. Some people with COVID-19 can remain PCR test positive for several weeks, he notes, adding that though they do not seem infectious, "this is longer than expected".

COVID & Immunity: What If It's Common to Get Reinfected?

One might wonder as to why the Korea Centres for Disease Control and Prevention has raised the alarm over potential reinfection. The truth of the matter is that the failure to acquire immunity against COVID-19 may undermine the concept of "immunity passports" pursued by many governments including Chile, Germany, Italy, the UK, and the US as a condition for opening up.

"Knowing whether these are true reinfections that can continue to spread the disease will be extremely important in terms of both public health and economic consequences", highlights Yong Suk Lee, deputy director of the Korea Programme at the Freeman Spogli Institute at Stanford University. "If indeed these cases can start reinfections, or mutations of the virus can happen rapidly, then we need to be vigilant, and prepare for a new surge in cases".

This potentiality would mean that policymakers should be especially cautious in considering the lifting of restrictions and future strategies, deems Danny Altmann.

"If it's at all common to truly get reinfected, this would suggest that immunity is rather fragile, even in the short term – this would have scary implications", the professor admits.

Given that it's a new virus, there’s little data on how protective or how long-term immunity will prove to be, he notes, recollecting that for the SARS and MERS coronaviruses "immunity was not very durable": "So many people, even if they have antibodies now, may have no guarantee of immunity in 2-3 years", the immunologist suggests.

Will New Vaccines Be Effective Against SARS-CoV-2?

All of the above simply confirms the urgent need for effective vaccines, Altmann explains.

"Immunity to natural infection may be variable in quality and/or rather short lived, but these are points that might be overcome with a really good vaccine, offering genuine hope of true herd immunity", he says. "If you think about it, we really do need immunity as the virus probably won’t disappear: think of the common cold coronaviruses which crossed over to humans over 500 years ago, and have never stopped bothering us since!"

Carol Shoshkes Reiss shares Altmann's stance that a new vaccine may provide a solution to the problem: "Ideally, a vaccine will prevent infection (sterilising immunity), alternatively it will boost other forms of host response to diminish the severity or and length of infection", she clarifies.

In any event, the development of a vaccine is not subject to "false-positive" test results in South Korea which are likely to be caused by viral RNA remains, not actual infection, the professor underscores.

"There is no reason for any concern about the effectiveness of vaccines", for its part asserts Seol Dai-wu, refuting the idea that the alleged reinfections could be caused by mutations of the virus.

How Can South Korean Experience Help Other States?

The outcome of South Korea's COVID-19 research and experience is important for Europe and other countries which faced the disease later than the Asian state, the experts agree.

"Understanding these false-positive test results will assist in the interpretation of RT-PCR tests after the resolution of symptoms", elaborates Reiss. "Serological assays, the presence of antibodies specific for SARS CoV-2, is another important test, since only a small percentage of infections result in symptoms significant enough to be noted, and a smaller group of those people end up in the hospital".

On the other hand, the problem reflects a unique cultural and philosophical perception of how the COVID-19 outbreak should be handled, according to Yong Suk Lee.

If the South Korean CDC finds that there is the possibility of reinfection and continued spread of the virus from recovered patients nations will be forced to pick appropriate solutions to further battle the coronavirus, he believes.

"Europe and other countries will need to create a system of tracking that is compatible with each society if they want to contain the spread of the virus while minimising deaths", he suggests.

While some may opt for the South Korean experience, others may pick the Swedish model which depends on what sacrifices a society is eager to make, according to the scholar

"So either choose the South Korean model of having a consensus for tracking all cases and the government being extremely transparent about it and share all information with the people, or the Swedish model where people have a consensus towards herd immunity and the acknowledgement that some will get sick and die, and at the cost of more deaths. Somewhere in between, like in the US and many European countries, [they] will likely continue to exacerbate confusion and societal conflict".