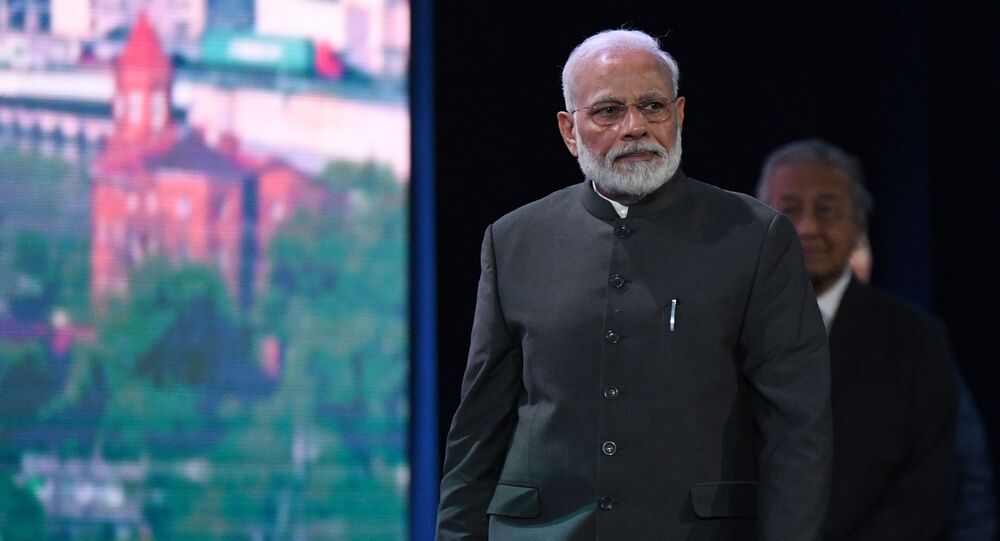 New Delhi (Sputnik): Victory Day marks the Red Army’s triumph over fascism on 9 May 1945 The Soviet Union is estimated to have lost around 27 million people during the Second World War, in which 2.5 million Indian soldiers also participated.

Narendra Modi was going to be the first Indian Prime Minister, along with a large military contingent, to participate in the 75th anniversary celebrations of the end of World War II. However, with the COVID-19 outbreak, all celebrations have been postponed.

© Sputnik / Alexander Kapustyanskiy
Faces of the Great Patriotic War
33
A bulletin from the Information Service of the government of India, dated 1 September 1944, reads that then Soviet ambassador to Tehran M. Maximov presented Russian decorations to officers and men of Indian regiments for distinguished services in the transportation of arms, material, and food to Russia

However, the 2.5 million Indian soldiers that helped the Red Army in their fight against the Nazis haven’t been celebrated on Victory Day by India.

On VE Day in 1945 some 2.5million Indian Soldiers who fought as part of the Allied Forces also celebrated. Pictured is Aircraftman Singh of Ambala receiving news of victory with Corporal Boyd of Lanarkshire in 1945). Indians had participated in the European …(contd)#VEDay75 pic.twitter.com/jJOQk4TRQn

​The role of Indian troops, who then under the aegis of the British Army, hasn’t been celebrated in India due to the nature of it being a colonial legacy. It was during World War II when Mahatma Gandhi began the Quit India movement against the British, seeking their withdraw from the country and getting the country's troops back home from Iran, Africa, and parts of Europe.

Resentment towards the nation's former colonial boss has long simmered in the Indian National Congress, which came to power post-independence, over Britain's 200-year rule and the widespread arrests of Indian leaders such as Mahatma Gandhi and Pandit Jawaharlal Nehru during the Quit India movement.

In 2015, Congress leader Shashi Tharoor at the Oxford Union, while demanding reparations from the UK for 200 years of colonial rule, had mentioned the “great Bengal famine during World War II when four million people died because Winston Churchill deliberately as a matter of written policy proceeded to divert essential supplies from civilians in Bengal to sturdy tummies and Europeans as reserve stockpiles”.

On the other hand, as per Harsh Vardhan Tripathi, the Modi government has cultural nationalism at its core and Victory Day celebrations are remembrance of Russia’s Great Patriotic War, which binds the two in a common thread.

© Sputnik / Максим Блинов
From Kinzhal Missiles to Su-57 Fighters: Sneak Peek of Victory Day Aerial Parade Over Moscow
British historian and journalist Max Hastings, in his book “Inferno: The World at War 1939-1945, said “it was the western allies’ extreme good fortune that the Russians and not themselves, paid almost the entire ‘butcher’s bill’” for defeating Nazi Germany.

This was evident from the fact that German forces suffered most of their defeats on the Eastern Front, on the territory of the Soviet Union. In the Great Patriotic War, it is estimated that the Soviet Union lost around 27 million people.

To salute Indian heroes who supported USSR in #WW2 we share the story of 2 soldiers decorated with Order of Red Star. Russian MoD will immortalize their gallant deed in Moscow museum.

“There is a difference in approach between the Modi government and past governments. I think the government is convinced about the contribution of Russia, which lost around 27 million of its citizens while defeating the Nazis", says Tripathi.

Since Modi came to power in 2014, he has not hesitated to pay tribute on Victory Day. Indian President Pranab Mukherjee even went to Russia in 2015 to take part in the 70th Victory Day anniversary.

Historical documents — archived in the National Archives of India as well as publication houses such as Kashi House — clearly state that Indian troops and the Soviet armed forces fought battles jointly during World War II.

On past governments refraining from celebrating the role of Indian troops in the Second World War, Senior Fellow from the Observer Research Foundation, Nandan Unnikrishnan, tells Sputnik: “I believe that our participation in military events outside the country is a reflection of our deepening understanding of history as well as understanding of our current role in the world. If thousands of Indian soldiers who died in these wars, do you recognise their efforts or do you say that they were fighting for another army?”

​“What is happening today is we are appreciating the role that our soldiers played in the defeat of fascism which was an evil and Indian soldiers contributed to that defeat", Unnikrishnan adds.

Meanwhile, on Friday, the Commonwealth War Graves Commission (CWGC) while paying tribute to 87,000 Indian soldiers, said “Indians served in theatres of war across the world, including India and Burma, Malaysia, Singapore, and Hong Kong, the Middle East and North Africa, Greece and Italy. They served at sea and in the air, as well as contributing to support and medical care”.

© CC BY-SA 4.0 / Colin / Royal Albert Hall
We'll Meet Again: Royal Albert Hall to Host First Closed Door Victory Day Concert Amid COVID-19, CEO Says
In the Red Army’s fight against the Nazis, Soviet and Indian troops shared historic moments such as the meeting between Soviet frontline units of the Transcaucasian Front and vanguard of Indians from the British units in Central Iran on 28 August in 1941, following which Indian infantrymen secured operations in the southern part of Persian Corridor — a supply route to the USSR through Iran to provide military supplies.

Squadron Leader Rana TS Chhina, Secretary of the Centre for Armed Forces Historical Research at the United Service Institution of India, tells Sputnik: “When the supplies to Russia had been cut off (in 1941) following the German invasion, the Iranian route was the only way to keep the supply route open”.

Colonel Behram A. Sahukar, the son of Adi K. Sahukar, who was a major heading one of the units of the Royal Indian Army Supply Corps (RIASC) involved in the supply mission, describes the terrain faced by Indian soldiers to provide supplies.

“The road distance was 730-kilometers, only a short distance was paved, the rest was gravel. The trucks used to be loaded right up to their upper limit and there was passes about 6-8,000 ft high", Behram tells Sputnik.

In another such tale of valour, two Indians — Subedar Narayan Rao Nikkam and Naib Subedar Gajendra Singh of the 51 GPT Company of the Royal Indian Army Supply Corps — were decorated by the Soviet Union with one of its highest military awards, the Order of the Red Star.

Bhagwan Chand, third son of Gajendra Singh, recalling his father’s role in the supply mission, said his father continued the journey in spite of being injured. After reaching his destination, he was hospitalised, Chand says while regretting that his father never received any recognition or pecuniary benefit from the Indian government.

The Great Patriotic War Through the Lens of Army Photojournalists