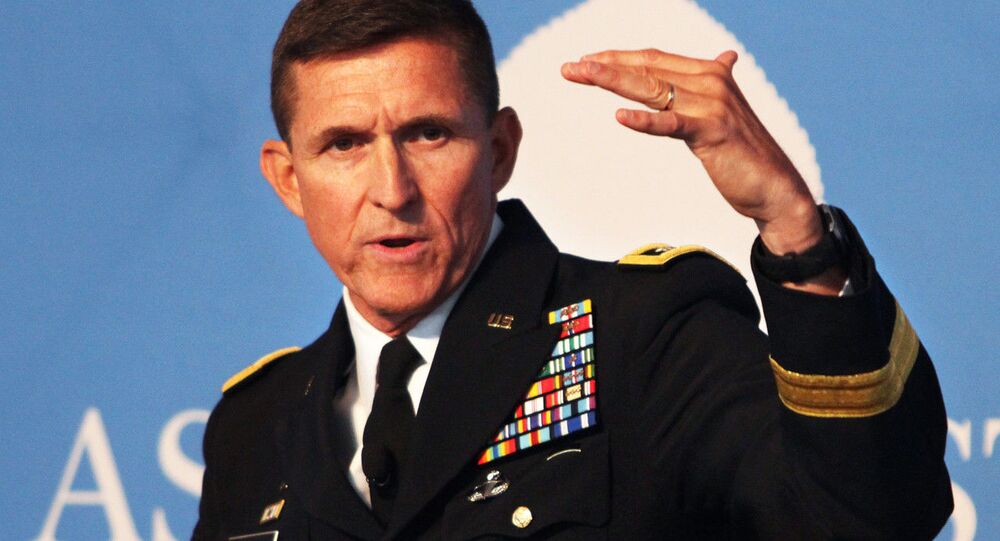 The DOJ's decision to dismiss the charges against Michael Flynn takes on a new significance amid John Durham's investigation into the origins of the US intelligence operations against the Trump campaign, says Wall Street analyst Charles Ortel foreseeing that it's just a prelude to new explosive revelations.

On Thursday, the Department of Justice dropped charges against ex-National Security Adviser Michael Flynn over lying to FBI agents on 24 January 2017 concluding that "continued prosecution of this case would not serve the interests of justice". The move came on the heels of the release of bombshell documents which indicated an apparent "perjury" trap set by the FBI to frame the general.

NEW - the Motion to Dismiss the charges against General Flynn

"based on an extensive review and careful consideration of the circumstances, that continued prosecution of this case would not serve the interests of justice." pic.twitter.com/6aUTz9OK2I

​Speaking to CBS News on Thursday Attorney General William Barr said that the DOJ had a "duty" to dismiss charges against Michael Flynn since the lie the general was prosecuted for wasn't "material" to an inquiry: "They did not have a basis for a counterintelligence investigation against Flynn at that stage", the attorney general highlighted.

'Flynn Now Will Go From Strength to Strength'

Many in America regard Michael Flynn to be an authentic hero, says Charles Ortel, a Wall Street analyst and investigative journalist who has been closely following the case from the start.

He highlights that although Flynn's career hopes were dashed by his guilty plea, now that the DOJ has dismissed the case they "would seem wide open".

"I hope he now will go from strength to strength, whether inside or outside the Trump Administration", he says.

Ortel does not rule out that President Trump may even grant Flynn and, potentially some others, "unconditional pardons" in order to block future interest in exploiting this ground "should, by some chance, Democrats maintain or increase their power in Congress or regain the White House".

"With US Attorney John Durham months into an effort to understand the opening of investigations into candidate, president-elect, and President Trump, and given that the FBI, Congress and even elements within the Department of Justice have slow-walked production of evidence, the decision to abandon prosecution now, years after pressuring General Flynn into a guilty plea has monumental significance on many levels", he stresses.

The analyst outlines three major reasons why the DOJ's decision is of utmost importance today:

·         First, "this decision likely affords attorneys for Flynn avenues to seek compensation for the general as this malicious prosecution was not lawfully opened or pursued".

·         Second, "numerous government officials likely harnessed powerful tools to persecute a political opponent of President Obama" and now it's time to restore the credibility of the DOJ and FBI.

·         Third, "this development further calls into question the basis for opening Special Counsel Robert Mueller's investigation and all subsequent prosecutions".

In a word, far from stopping the release of more information, this likely is a prelude to the opening of floodgates and a torrent of more long overdue revelations, Ortel believes.

Though the case is almost over – it still requires Judge Sullivan to hand down a verdict on the DOJ's motion to dismiss the case – there are a number of questions which still remain unanswered, according to the analyst.

"When was Flynn actually targeted?" asks the investigative journalist. "Was it as far back as when he left service in the Obama administration? Was it when he joined the Trump campaign? On what basis was he targeted? And who authorised the targeting?"

Now that the case has been dropped, "lots of demands will come from all who have been scarred by the Mueller witch hunt for reconsideration and/or compensation", he foresees.

"I expect Durham may be close to advancing long overdue prosecutions of Deep State partisan supporters of presidents Barack Obama, George W. Bush, Bill Clinton and George H.W. Bush", says Ortel. "And I hope Durham and others will focus resources on understanding why these co-conspirators would take the risks they have taken in, likely, plotting to overthrow the expressed will of the electorate in 2016. Might part of the answer be that many elected to cover up crimes going way back in history that started in Arkansas and Washington, DC then spread across America and around the world involving fake charities, illegal political fundraising, corruption, and even treason involving 'presidential libraries'?"