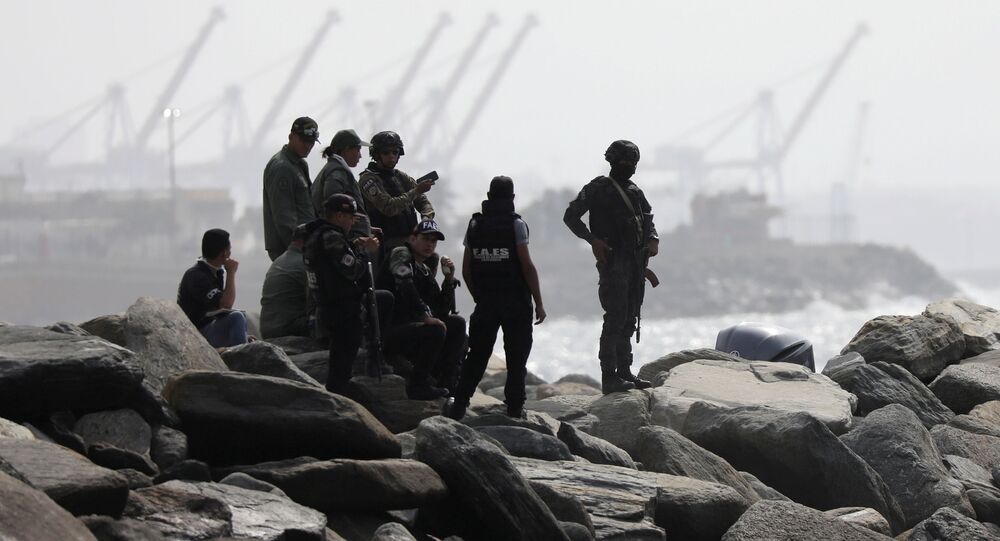 On 3 May, the Venezuelan military thwarted Silvercorp USA's covert naval "Operation Gideon", capturing two US citizens, Luke Alexander Denman and Airan Berry, together with 11 other militants. Venezuelan analysts have discussed whether the White House was behind the botched raid and why it was doomed to failure.

On Wednesday, Venezuelan media broadcast the confession of Silvercorp USA mercenary Luke Alexander Denman. According to Denman, the militant group planned to kidnap Venezuelan President Nicolas Maduro and bring him to the US.

Earlier, Silvercorp USA CEO Jordan Goudreau, a retired Green Beret and three-time Bronze Star recipient for bravery in Iraq and Afghanistan, claimed responsibility for the raid speaking alongside Javier Nieto, a retired Venezuelan Army captain in a video released on social media on Sunday. The two men said that they had kicked off “Operation Gideon” from Colombia aimed at instigating a rebellion against Maduro and capturing high-level Venezuelan officials.

​Were Guaido & White House Involved in the Botched Raid?

It has turned out that Goudreau allegedly signed a $213 million contract with self-declared interim President of Venezuela Juan Guaido in October 2019, something that Guaido has vehemently denied. A copy of the supposed contract was published by Miami-based Venezuelan journalist Patricia Poleo, who interviewed Goudreau on Sunday. She also released recordings of an alleged phone call between Guiado, Goudreau, and senior Guaido envoy Sergio Vergara concerning the matter. However, according to the retired Green Beret, Guaido did not pay a dime for the job.

Washington has also rejected any involvement in the botched naval raid. However, The American Conservative's Barbara Boland suggested that at least some present and former White House officials could have known about the operation, citing John Bolton's tweet posted on the eve of the seaborne invasion as well as TAC's interview with Roger Francisco Noriega, an American diplomat who served as assistant secretary of state for Western Hemisphere Affairs in the administration of George W. Bush.

Morning is coming to Venezuela -- again.

​The mercenary raid was organised by US political forces and their allies, insists Dr Angel Rafael Tortolero Leal, a professor at the Universidad Nacional Experimental de los Llanos Centrales Rómulo Gallegos, diplomat, and former ambassador. According to him, the incursion falls into the pattern of Washington's economic blockade and political attacks against Venezuela amid the coronavirus pandemic.

"Now, that we are financially and commercially blocked by the [US], that has not prevented the country's social and health policies from giving tangible results in the fight against the pandemic and for survival. And the maximum level of alert of the patriots organised in defense of the homeland has not decreased either", Dr Tortolero emphasises.

The attack came on the heels of a large-scale US naval operation near Venezuela's shores and an indictment of President Maduro on alleged narco-terrorism charges along with other 14 present and former Venezuelan officials by Washington.

"Venezuela has faced a new aggression from the United States", echoes Miguel Jaimes, a Venezuelan political scientist, analyst, and expert in oil geopolitics.

It is not something new for the US to use private mercenary organisations to do the dirty work, the political analyst highlights, referring to Blackwater, a notorious private military company which worked in war zones in Iraq and Afghanistan.

© Photo : Camila/twitter
Captured by Venezuelan authorities on the coast of Aragua state

The political scientist opines that the US interference in Venezuela could have had two reasons: first, the Venezuelan opposition has so far failed to make any tangible progress in taking power; second, those behind the operation apparently believed that that the Venezuelan military and population would support the rebellion against Maduro. According to him, the mercenaries and their backers in Colombia, the US, and the Venezuelan opposition deluded themselves into thinking that Venezuela is a failed state and an easy nut to crack.

"Venezuela has long been on maximum alert", he underscores. "Venezuela has studied all the [possible] scenarios and including an attempted violation of our sovereignty by a group of mercenaries which took place on Sunday. It was expected that this would not take the Venezuelan security forces by surprise and here we have analysed all the possibilities of foreign interference in a very violent way to bring down the government. Many things have happened here since the assassination attempt against the President of the Republic, acts of sabotage, purchases of high officials and other military personnel by the CIA and the State Department".

The coordinated work between all the components of the Venezuelan Armed Forces, intelligence services, and inhabitants of small population centres (poblados) located on the country's coastline ensured a rapid and efficient response to the mercenary invasion, he points out.

​"Certainly, the northern coastal zone of Venezuela is very large and the coastal area, more than 2,300 kilometres in a straight line, is strewed with many settlements, many population centres most of them very small. Settlers and fishermen who live in these areas have a very direct relationship with each other", the analyst says, explaining why the covert operation could not go unnoticed.

He does not rule out that the botched naval raid was a prelude for larger operations against Venezuela. Still, the way how it played out has put the US and the Venezuelan opposition at a huge disadvantage as the country is now mobilising around Maduro with "the moderate" opposition openly defying any sort of foreign military intervention against Venezuela, according to the political scientist.

"No country in its right mind can accept that it would be used as a centre of destabilisation for the entire region", Jaimes notes. "From Central America to South America: Brazil, El Salvador, Colombia, Peru, Ecuador, Chile, and Bolivia, now have very destabilised governments with no popular support; unfortunately the armed forces [of these countries] have been at the service of very powerful economic groups [there]".

Now the government is giving instructions to the people, community councils, members of the United Socialist Party of Venezuela (PSUV), and the county's whole "patriotic pole" which is ready to defend Venezuela's sovereignty, the political analyst emphasises.

Alan Dantas, a Brazilian journalist and editor of Dossier Sul, contributed to this article.