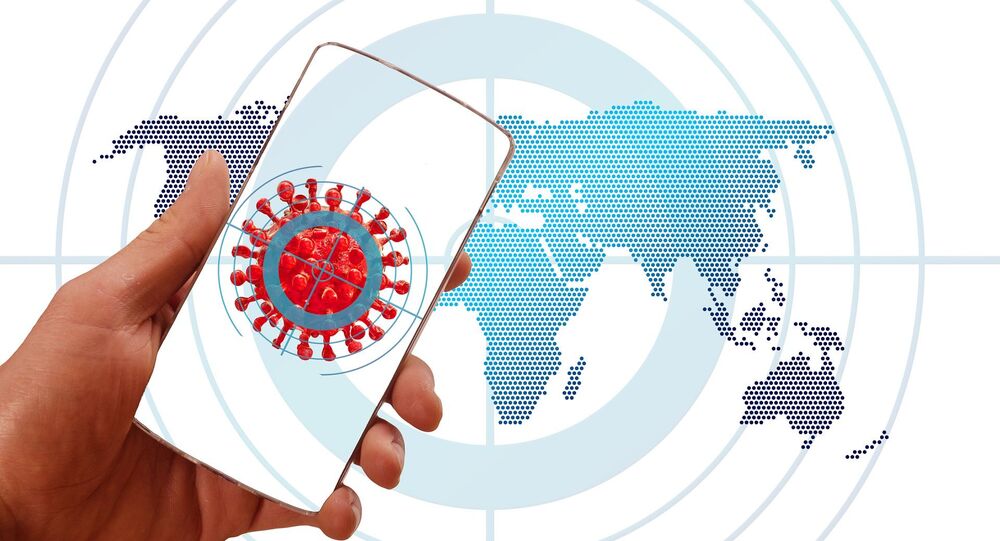 A coronavirus contact tracing app is being trialled in the English county of the Isle of Wight, where it will be given to the NHS and local council staff. Should the trial be successful, it is rumoured that the British government will consider deploying it throughout the rest of the UK.

Scientists have argued that the use of the technology could help prevent the further spread of the coronavirus by monitoring whether those who have tested positive for the disease have recently come into contact with, and subsequently enforcing quarantines, should they not already have gone into self-isolation.

Political commentator and leading Brexiteer John Whitby gave his views on the matter.

Sputnik: Should contact tracing be widely deployed in the UK to combat the spread of coronavirus?

John Whitby: I think it has positives and negatives to it. I think it may be effective, and it’s been used in other countries quite effectively, but it does really though go off the back of knowing who has got the virus in the first place and making sure that you do know who has got it.

The government has managed to ramp up the UK’s coronavirus testing ability, so that should help in that area, but what is also very important is to have the antibody checks for people, because if you know who has got it; that’s fine, but you don’t know if they are going to have it tomorrow, but if you know that they have had it in the past, then you are starting to get a much bigger picture.

I think that the only potential downside is that there have allegedly been some issues with the app, and some people are complaining that it doesn’t meet safeguard rules and what have you, and that is obviously very important.

I am a bit concerned as to how long-lasting this will be, is it going to be something that will be recommended, or effectively required in the future, in case there is another pandemic? We are in the UK already one of the most monitored nations in the world, in terms of CCTV and everything else, the ability for the police to track your car movements via number plate recognition cameras, and this could just be yet another way to have your every movement monitored, and that concerns me a bit.

Sputnik: When should the UK loosen its coronavirus lockdown restrictions?

John Whitby: Whoever makes the decision, whatever decision it is; it is going to be seen as the wrong one. The impact on the economy from the lockdown is horrendous, and somebody I have spoken to in the past in a similar business to what I used to be in, events, committed suicide because his business effectively died completely, and that is not going to be an uncommon scenario.

The impact on the GDP of the country is going to be awful, and that could then have a knock-on effect if the government doesn’t have the income required to fund services; what is the impact of that going to be in the long term, on the death rate in the UK?

I don’t have the knowledge to really make that decision, and I would hate to be in a position where you have to make it, because whatever you do; someone, somewhere is going to use it to make political capital against you, because the decision will have been wrong, and from some people’s point of view, it will be wrong whichever decision is made.

I think we are going to have to look at starting to ease the lockdown, but the problem is making people in this country realise that it is easing, not a removal, I think that social distancing measures will have to be in place for a considerable length of time, and that will have an impact on things like restaurants, pubs and clubs, because how do you socially distance? There needs to be a way of doing that, and I think that we can safely say that society and the way that we live our life in the UK, will not be the same again for many years.

Sputnik: Could the UK’s coronavirus death toll have been reduced if Westminster was more decisive with its public health policy?

John Whitby: Hindsight is always twenty-twenty vision isn’t it? New Zealand is being held up as an example of an effective lockdown, but they were actually criticised roundly by the World Health Organisation for doing it, it wasn’t necessary.

I think that what the British government tried to do was do it in a staged approach, and saying “we need you to do this”, and then moving to stricter measures, but we haven’t really got a lockdown; Spain has a lockdown, where you go out of your house and you go more than fifty yards, you are met by the army, and sent back at the point of a gun, that’s a lockdown.

What the UK has got is something that is reliant upon the common sense of people, and I think that we have proven ourselves to be sadly lacking in that, but one thing that I think the government should have done on the lockdown, is that they should have effectively closed the airports to anybody coming into the country, except UK citizens returning, and anyone who did return should have been housed in one of the empty hotels for fourteen days, and isolated.

I think that would have had some impact, but from what I’m seeing from comments from people around the world; it seems that coronavirus was out and about in the world much earlier than people are admitting to.

The French believe that they had their first case at the beginning of December, and I’ve read people commenting that they’ve been testing positive for the antibodies, but they hadn’t been ill except from October, November and December.

I have a sneaking feeling that if honestly was prevailing in this; there would be a finding that this virus was out and about from China in probably October, and if that is the case, then I don’t think it would matter what people did, we would still have had the virus at large in this country, and unless you have the ability, which China does but this country doesn’t, to turn around and say “ stay indoors, or else”, we are a democracy, and things need to be done with the will of the people, and you have to rely on the will of the people being sensible.

© AP Photo / Eric Risberg
After Coronavirus: Countries Like UK Need to ‘Build Resilient Local Supply Chains’ Says Economist
I think that overall the government have made a few mistakes, I think a big one is their approach to small businesses, and I think that will cost the economy in the future, a lot of small businesses are going to go under, a lot of people are out of work, so that is really going to have an impact over the next year or eighteen months.

Overall, I think that the government have acted reasonably quickly and sensibly, and they haven’t done it as a knee-jerk reaction, they have actually followed the advice that they have been given by the professionals, and taken reasonable measures.