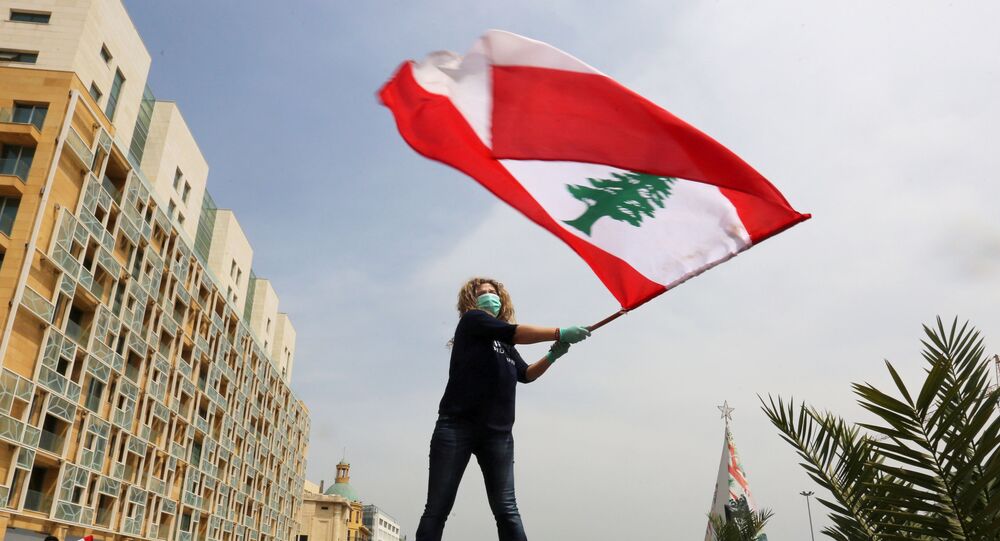 The raging coronavirus deteriorated Lebanon's economy: while many took to the streets venting anger at the government for failing to introduce reforms that would improve their conditions, others used the opportunity to lash out at the Shiite movement Hezbollah, which is being blamed for the country's dire economy.

Lebanon has started easing the restrictions it imposed in the middle of March in a bid to curb the spread of coronavirus that has so far claimed the lives of 25 people.

On Monday, authorities allowed restaurants and cafes to reopen if they did not exceed 30 percent of their normal capacity, and beaches and seaside resorts have been also allowed to welcome visitors.

That, however, hasn't eased the tensions that have been brewing in the country. It's only made matters worse.

For years, Lebanon has been suffering from dire economic conditions, bloated inflation, poverty rates that stood at 32 percent in 2018 and high levels of unemployment. The situation spiraled out of control in October 2019 following the government's decision to introduce a tax on Whatsapp messages and increase taxation on gasoline and tobacco, prompting mass protests across the country.

But the pandemic that has forced the authorities to shut down businesses, government bodies and public institutions has only exacerbated the situation, pushing the masses into the streets despite the lockdown that has been in place up until recently.

Last week, angry mobs clashed with the country's security forces and set fire to a number of banks in several Lebanese cities. The most violent rally took place in Tripoli, Lebanon's poorest city, where protesters have been fighting with policemen and soldiers late into the night.

"Only recently, some 100 thousand people have lost their jobs, the value of the country's currency plummeted, whereas the country's public debt nears $90 billion. Naturally, it had a bad influence on Lebanon's ability to address the burning economic, social and political issues and made people take to the streets in an attempt to force the government to improve their conditions," said Ali Yehya, a Beirut-based political analyst.

The only problem is, says Yehya, that in order to achieve their goals, protesters need unity, and this is something their wide but diverse camp is currently lacking.

"On the streets you will see different people pursuing different goals. You can see students and the unemployed who have nothing to lose and who just want to improve their economic conditions. But you also have representatives of Lebanon's left who want the removal of the government. And there are also those who have been calling for the ouster of Hezbollah".

Some protesters blame the Iran-backed group that has been part of the government for years for driving Lebanon into a deep economic crisis.

It was due to the Shiite movement that Washington blacklisted a number of Lebanese companies back in February and it was they who prompted the US Treasury Department to impose a series of sanctions on the country's Jammal Trust Bank in 2019, forcing the governor of Lebanon's central bank to withdraw its license.

For Hezbollah chief Hassan Nasrallah, however, these claims are groundless.

Addressing the nation on Monday in a televised speech, the Hezbollah leader denied rumors that his group intended to destroy Lebanon's economy and refuted allegations that the Shiite movement was involved in the illegal currency exchange business.

"Although Hezbollah pumps some money into the country, the media is partially turning against the group, hoping to put pressure on the Lebanese government to cease their influence. But I doubt these plans will materialise, simply because they enjoy a wide following," said Yehia.

According to a recent poll conducted amid the mass protests of last year, 75 percent of Lebanon's Shiites -- who make up some 30 percent of the population - supported the Islamic group. Only 7 percent of the country's Sunni population held similar views.

Support for the group among Lebanese Christians stood at 25 percent.