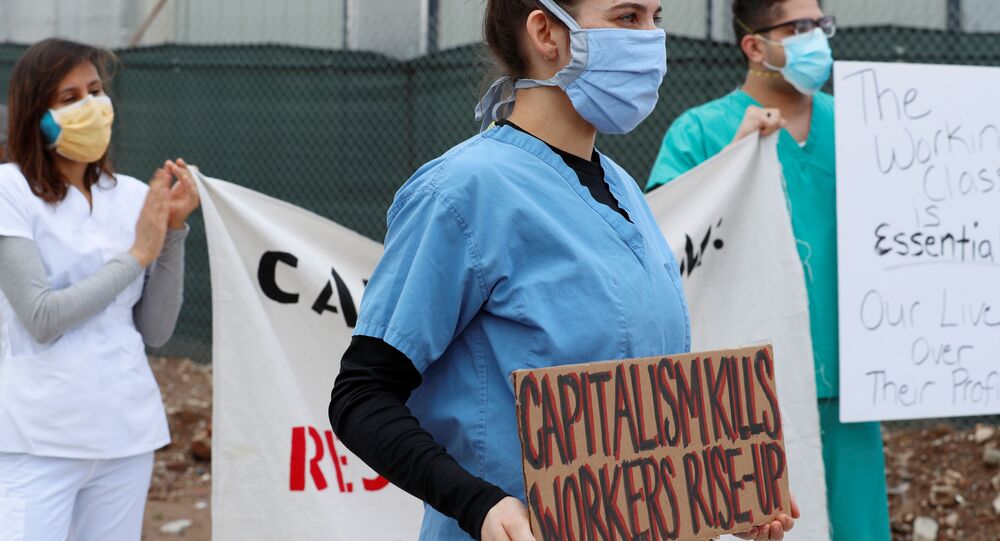 Essential workers staged protests across the US on Friday, demanding safer working conditions and the end of lockdown measures, as the COVID-19 pandemic has caused a resurgence in the labor movement, Yasemin Zahra, a labor organizer and chairperson of US Labor Against the War, told Sputnik.

Essential workers across many industries took to the streets Friday as workers have done on May 1 for decades, demanding better working conditions. While National Nurses United (NNU) held nearly 140 rallies in 13 states calling for the US government to provide more masks and other protective equipment, warehouse workers and grocery employees at Amazon, Whole Foods and Shipt walked off the job in New York’s Staten Island, California’s Bay Area and Los Angeles, Ohio and Kentucky. Such essential workers have stated that their employers have been slow to establish safety precautions and provide them with protective gear to safeguard them against the coronavirus.

“It [the labor movement] has returned, and as you mentioned, it does commemorate a time in US labor history. But ironically, it’s been all but washed away from our current culture, and that’s what we’re trying to do at US Labor Against the War, is to really bring back this holiday, because this is our day … This is the real Labor Day, and this pandemic has really made clear how absolutely essential workers are to our economy,” Zahra told Loud & Clear host Brian Becker on Friday.

Similar protests calling for additional safety measures and protective equipment for workers took place across the world on Friday in countries like Greece, Italy, Spain and Austria.

May 1 is known as May Day or International Workers’ Day and was originally suggested in 1889 by the Marxist International Socialist Congress and pushed by the American Federation of Labor, which was then demonstrating for an eight-hour work day. May 1 eventually became a national holiday to celebrate workers and the working classes in most countries around the world, but not in the United States.

In socialist countries such as China, Vietnam, the former Union of Soviet Socialist Republics, and Cuba, May Day is a national holiday during which the country showcased its industrial accomplishments, including military hardware.

“Our economy is global. We are all globally connected, and workers have the same issues here in the US that they do in Iran and Venezuela and Cuba and China, Sweden, Syria, all around the world. We just want to live dignified lives, but the same handful of super rich billionaires are the ones really getting in the way of that. And they don’t want us to understand our solidarity across countries, across borders, race, gender lines, because then we will understand that we’re the ones that have all the power as workers,” Zahra explained.

A new report by the Institute for Policy Studies think tank has found that between March 18 and April 10, the collective wealth of American billionaires increased by $282 billion, or 9.5%. The country’s richest have continued to become richer while tens of millions of Americans lose their jobs. The Coronavirus Aid, Relief, and Economic Security (CARES) Act, a $2 trillion bill signed into law by US President Donald Trump on March 27, provides tax cuts to wealthy Americans while only providing a $1,200 stimulus check to the average American.

“They’re still giving bailouts to these major corporations, and when you’re looking at what’s happening from afar, we’re getting crumbs thrown at us … As the labor movement, we need our own party. We cannot depend on the Republicans or the Democrats. Both parties have been bought and sold for the rich,” Zahra added.

Despite the resurgence in the labor movement, more work needs to be done regarding trade unions, Zahra pointed out.

“I do think this COVID crisis, this global pandemic, has really sent a shock through our entire system, throughout our unions, and has really exposed the inability for our government to protect its own workers. There are so many workers who are now struggling, both union and nonunion,” Zahra added.

“There’s definitely a lot of work to be done, a lot of growth to ensure our unions are democratic, are representative of our membership and that we’re bringing the unorganized sector into the fold  … we have a lot of workers who are still unorganized across the country. In the private sector we only have about 10% of workers unionized. In the public sector, it’s around 30%,” Zahra explained.

Protests Erupt Across US as Workers Demand Safety, Reopening - Videos