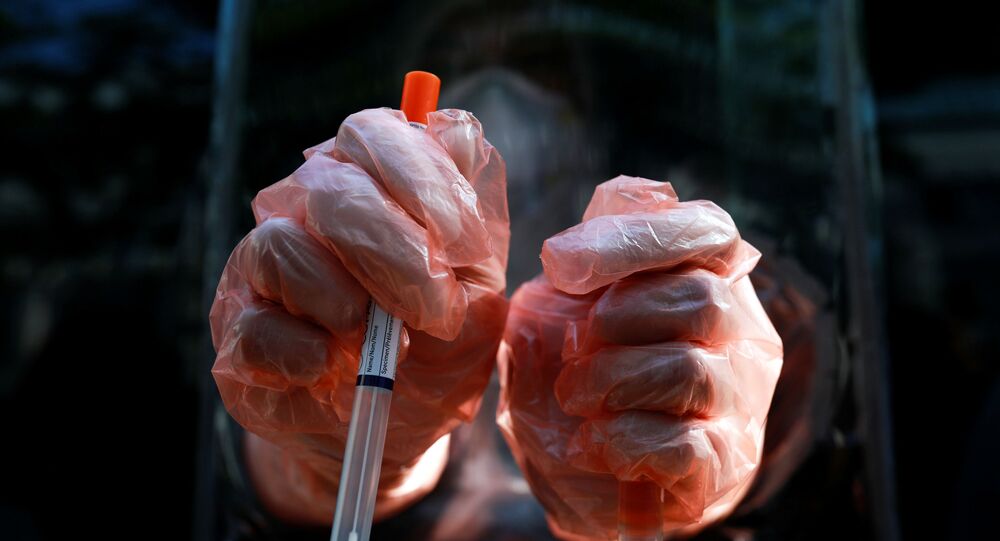 New Delhi (Sputnik): India has cancelled orders for about half a million coronavirus testing kits from China after they were found to be "faulty". Beijing, in turn, called these allegations "unfair and irresponsible".

India went on an emergency sourcing spree for rapid testing kits for COVID-19 from Chinese manufacturers in wake of the nation's growing caseload. The order for rapid test kits, on behalf of several states, was placed by the Indian Council of Medical Research (ICMR) with a distributor of of imported Chinese materials.

But the Indian distributor sold the kits to ICMR at an over 60 percent profit margin, which was revealed during a judicial dispute between the importer and distributor.

“For people to be assured that the pandemic is under control and for governments to ensure and for agencies engaged in the frontline battle to safeguard people’s health, more kits/tests should be made available urgently at the lowest cost, for carrying out extensive tests throughout the country. Public interest must outweigh private gain", the High Court of Delhi held in the case, while ordering them to be sold at a reduced price.

© REUTERS / Lucas Jackson
'Preemptive Prejudice': China Lashes Out as India Stops Using Its 'Faulty' Test Kits
Indian states, who had sourced these Chinese kits through ICMR, however complained about the accuracy of the tests. It also failed in quality checks by the ICMR itself, who later cancelled an order for about half a million kits.

Several experts have questioned the ICMR, as the apex body responsible for formulating, coordinating, and promoting biomedical research, for the way in which it handled the acquisition of Chinese test kits.

K. Sujatha Rao, a former secretary at the federal Health Ministry, said ICMR appears to have bypassed well-laid out procedures for such purchases.

“As far as I know, the guideline would require procurement to be done directly from the manufacturer. I do not know the circumstances under which they have bought them from an importer. But then it would have been approved by the Finance Ministry and so I have to assume that the process must have satisfied some of the financial rules in this regard", Sujatha Rao told Sputnik.

Rao said that ICMR was supposed to carry out random checks to certify the quality of the kits before those test kits were handed over to states. “It’s unclear as to how the kits could have been sent to states without testing the kits for quality requirements being consistent with those laid down by them in the call for bids", she said.

ICMR has already approved test kits developed by several Indian labs for commercial production, while a number of government-funded laboratories, who have developed both rapid test kits and RT-PCR Test Kits (Real Time Reverse Transcription Polymerase Chain Reaction) are still waiting for validation of their kits by ICMR, which is the designated authority for it. Sputnik has reached two such labs, who said that said even though they had completed the mandatory procedures, they are still waiting for validation from ICMR.

“I think the highest priority should be paid to ramp up internal capacity to manufacture these testing kits and make them available in the quantities required. It is not rocket science and India has the technological capability", suggested Rao.

A US-based Indian healthcare activist also concurred with Sujatha Rao, and felt ICMR should have explored the possibility of domestically-made test kits.

“I do not know why ICMR would go to China when national manufacturers could produce the same kits, perhaps of better standard. I can't think of a valid reason for this and obviously, the thought of 'corruption' looms in the mind particularly when I am personally familiar with how corrupt the Indian healthcare system can be", Dr Kunal Saha, President of People for Better Treatment, a voluntary society fighting for better healthcare systems told Sputnik.

The activist said the fact that ICMR has already withdrawn the test kits from China clearly suggests that these kits were below standard.

“But why would the largest governmental agency (ICMR) procure and supply flawed test kits from a foreign country (China)? Did ICMR not verify the quality of these kits before starting to supply to clinical labs across India?”, he wondered.

Meanwhile, Sujatha Rao said, the “desire to import would have been only guided by the urgency to get the kits to undertake disease surveillance as this data would have been immensely valuable for taking a decision related to the lockdown on 4 May".

ICMR has, as of Thursday, tested only 830,200 samples in a population of 1.3 billion. The number of COVID-19 cases in the country continues to grow and has surged to 33,050. This includes 8,325 patients cured and discharged from hospitals and 1,074 deaths due to the viral infection.

An apex Indian scientific body, in the meantime, is in an advanced stage of developing a drug for COVID-19. The chief of India’s Council for Scientific and Industrial Research (CSIR), Shekhar C. Mande told Sputnik recently that CSIR laboratories “have generated complete synthetic routes of these drugs, so that when regulatory approvals are obtained, we will be ready to make them".