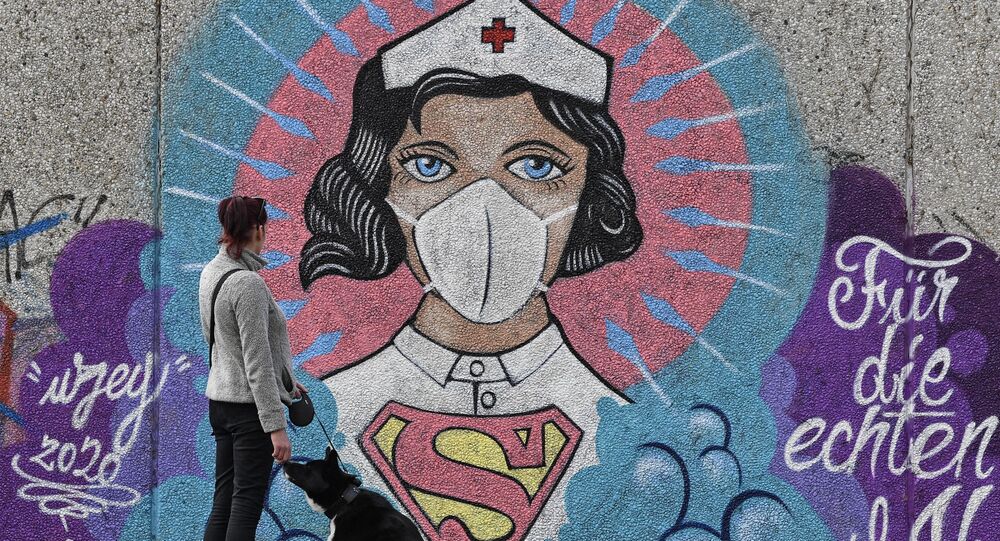 Germany's response to the coronavirus pandemic has been widely lauded in the media, with many analysts saying that the country has set an example for the whole world for how to keep the spread of the contagious disease under control.

According to Édouard Husson, author of "Paris-Berlin: the Survival of Europe" (‘Paris-Berlin, la survie de l’Europe’), the fact that Berlin has handled the COVID-19 pandemic much better than its European allies is in particular due to Germany’s level of decentralisation and industrialisation.

The lockdown is scheduled to end in mid-May in both France and Germany. However, there’s a striking difference between Paris and Berlin: on 17 April, there were 17,920 COVID-19 victims in France, while in Germany there were only 3,868. Germany has 40,000 intensive care beds, while France owns only 14,000. Finally, 350,000 tests are carried out each week in Germany, compared to 150,000 in France. Yet, according to the Organisation for Economic Co-operation and Development (OECD), the two countries have comparable health spending at about 11 percent of GDP.

"The real reason is that, thanks to increasing subsidiarity, Germany has been able to react and adapt to the crisis, because the measures have been developed directly on the ground". At the next level, there are regional ministries of health coordinating with each other. The federal minister of health "intervenes very little" – only when it comes to issues of provision, equipment, and statistics.

"In France, the money goes mainly to hospitals in metropolitan areas and in the technostructure that manages hospitals, regional health agencies […] while in Germany, money goes primarily to the field and directly to hospitals".

The second reason is the German industry, be it the pharmaceutical sector, the car industry, or machine tool industry, that has been able to mobilise forces and manufacture ventilators, tests, and medical masks.

Germany is a country "that has kept part of its production chains, namely assembly and finished products", which became a decisive factor in fighting the coronavirus, because Berlin has managed to preserve "the ability to invest, organise, anticipate, and understand the risks".

"I believe that we are paying a very high price for the de-industrialisation of the country, for the fact that our leadership doesn’t know what it is to organise a modern country", Husson opines.

Édouard Husson is rather critical of the French government and the country’s senior administration, which is incapable to express a "real strategic vision" of the situation.

"There is a lack of strategic vision and a lack of ability to coordinate action at the national level", he explains. Faced with general distrust on the part of the population, the government has failed to properly inform the French and organise in order to manage the shortages of masks and tests, he claims.

"Germany reacted better, adapted better; it reacted quicker and knew then what it had to do. France is still looking for a way to organise efforts in the crisis", Édouard Husson said.

© AP Photo / Matthias Schrader
Germany's Bavaria to Cancel This Year's Oktoberfest - Reports
From this perspective, the behaviour of both countries’ leaders is quite indicative. The expert on Germany recalls that the chancellor, not mentioning the term "war", limited herself to "boosting the morale of the people, saying that it was a sanitary crisis". That’s why the ratings of Angela Merkel, whose popularity was declining, rose again, with 79 percent of Germans supporting her.

"Emmanuel Macron wants to prove at all costs that he is the commander and that he is in control of everything", hence his countless speeches and instructions, Husson continues.

On the economic level, Germany still has concerns, in particular with regard to the automotive industry and its supply capabilities, where it is "very dependent on Piedmont", Europe’s most affected region. Édouard Husson thus calls on Europeans to protect this European megalopolis, "from the London basin, to Lombardy through the Rhine valley, Eastern France and Switzerland, which are the historic axis of European capitalism".

"There is no longer Mario Draghi with his views; the ECB no longer corrects the mistakes of the member states’ leaders, which happened after the departure of Nicolas Sarkozy in 2012-2013. Mario Draghi imposed on Germany a plan to save European banks, including banks in the south. […] I believe that the chance of survival of the euro is one chance in two in the next two to three years", Édouard Husson said.

"The epidemic in Germany is 'under control and has become more controlled'. We can now say that everything has been successful; we’ve managed to move from dynamic to linear growth, the level of infection has decreased significantly", German Health Minister Jens Spahn said on 17 April.

He specified that about 1.7 million people had been tested for the coronavirus in the country. Germany has widely been lauded for setting an example for Europe and the whole world: according to a ranking compiled by the Deep Knowledge Group (DKG), Germany is the second-safest country after Israel, and is also one of the leading nations worldwide in terms of crisis management.