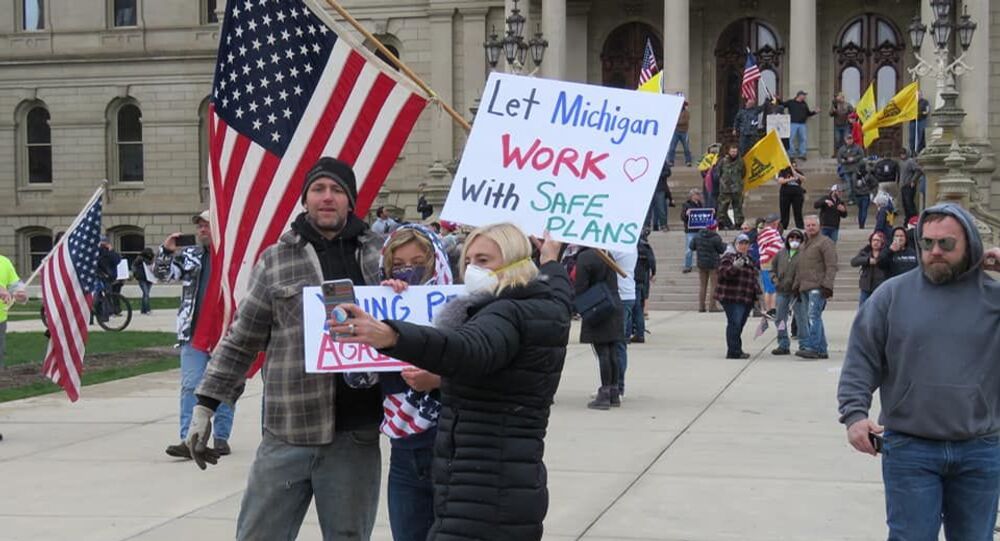 Protests last week in several US states against what residents claimed to be draconian measures imposed by Democratic governors to curb the spread of COVID-19 have gotten support from high places as a right-wing weapon against a perceived threat of left-wing ideas, political science professor Jodi Dean told Sputnik.

Protesters have claimed that the lockdown measures imposed by their governments violate their constitutionally protected rights by dictating what they can and cannot buy and restricting their civil liberties. US President Donald Trump showed his support for the protesters on Twitter by calling on the three states to remove stay-at-home orders related to the coronavirus, and he referenced new gun control measures signed into law by Democratic Virginia Governor Ralph Northam earlier this month.

"LIBERATE MINNESOTA! LIBERATE MICHIGAN! LIBERATE VIRGINIA, and save your great 2nd Amendment. It is under siege!" Trump wrote in three consecutive posts on Friday.

Republican Party, as well as various billionaire backers like the DeVos family, to try to exert a right-wing pressure on the country at a time when all of the momentum is going in a direction that says there must be full, national, universal health care for everyone, when there has to be support for working people, when there has to be support for people who are unemployed, when everyone knows that $1,200 in one check is going to do absolutely nothing to help the people who have been laid off,” Dean, who teaches at Hobart and William Smith Colleges and whose latest book is called “Comrade,” told hosts John Kiriakou and Brian Becker on Monday.

“So, I think that these protests shouldn’t be read just as about being against the quarantine. I think what they really are about is against what the protesters are made to perceive as a democratic initiative, a socialist initiative or even a communist initiative,” Dean said.

“It's being mobilized because people are feeling the pressure of the need for a strong national support for the households and families and people who have lost their jobs and become sick because of this. So, I think it’s a right-wing tactic, and it’s a tactic that billionaires are behind in order to exert pressure before Congress comes back,” she added.

“I actually think that one of the reasons there is so much support for socialism from millennials is not just that their lives have been devastated by gross inequalities of capitalism, but because they have grown up in a time when everything that can support their lives has been extensively demonized as socialist and communist,” Dean said.

“It might be the case that for some, the rhetoric turns them against justice or health and safety, but I think for many people, it’s going to be the opposite, and it’s going to backfire,” she predicted.

Puppy Cries for Family While Separated During Coronavirus Quarantine