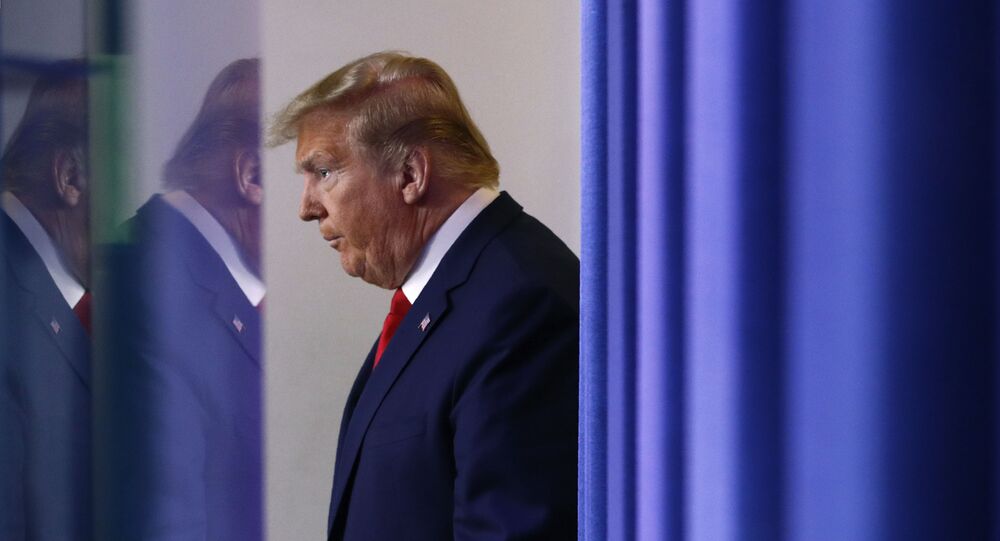 Donald Trump’s opponents from the Democratic Party have escalated their political attacks against his administration over his handling of the coronavirus pandemic. The question many Washington Beltway observers are now asking themselves is – will their criticism resonate with voters in November.

The Trump administration has taken a barrage of criticism from Democratic leaders, lawmakers, and Democratic-leaning media in recent weeks over the federal government’s response to the coronavirus pandemic, with activists slamming the president’s alleged scapegoating of China, his decision to cut US funding to the World Health Organization, and most recently, his provocative tweets calling on residents of Democratic-run states to “liberate” themselves and save their Second Amendment right to bear arms amid the crisis.

Critics have addressed the government’s response time, citing the administration’s haste to act to deal with the pandemic in February and early March, and compiled soundbites from Trump’s addresses and conversations with the press in which he appeared to play down the threat posed by the virus and made statements to the effect that the US has the situation “under control” and that the “risk to the American people remains very low.”

As the US overtook China as the country with the most COVID-19 cases and states across the nation introduced extreme social distancing measures (and in some cities, lockdowns), criticism, briefly interrupted by near-unanimously supported measures to approve the injection of over $6 trillion in stimulus spending into the economy, turned to the president’s plans to gradually reopen the economy to try to prevent the medical crisis from turning into Depression-like social and economic one.

Will It Be Enough to Unseat Trump?

The question many political observers have on their minds now is – what effect will the back and forth between Trump and the Democrats over his handling of the coronavirus have on his election chances in November?

“What is not being said, and is very important, is that the crisis enabled the president to recover from the whole impeachment process and appear very much in command during a time of crisis. American voters do not change presidents in a time of stress,” says Dr. David Woodard, professor of political science at Clemson University and former political consultant to multiple Republican congressmen.

Speaking to Sputnik, the academic recalled that from the time of Abraham Lincoln and the Civil War though to Woodrow Wilson during World War I, Franklin Delano Roosevelt in World War II, and George W. Bush and 9/11, American voters have confirmed their agreement with Lincoln’s proverb about ‘not changing horses in midstream’, i.e. not changing presidents during a crisis situation.

“This crisis actually helped Trump show his decisive and comforting side. What is more, the virus stopped the Democratic primaries in their tracks, and gave the president an opportunity to address the American people directly each day. His critics could not get air time because they had nothing to say,” Woodard says, pointing to Trump’s daily coronavirus press briefings, and Senator Bernie Sanders’ decision to bow out of the race and halfheartedly endorse former Vice President Joe Biden.

Indeed, even some of Trump’s critics, including columnists at the New York Times (or “the Failing New York Times,” as the president himself has labeled the paper), have admitted that he has been acting much more “presidential” amid the pandemic. Even Comedy Central’s Daily Show host Trevor Noah, typically a major critic of Trump, has given the administration some slack, interviewing coronavirus task force medical advisor Dr. Anthony Fauci in late March and allowing him to get the administration’s message out to Democratic-leaning young people.

That’s not to say that criticism has ceased completely, Woodard stresses, pointing out that once the pandemic peak was reached, “and the ‘curve began to decline’, politics returned. Mostly, the voice of Democratic governors, and their sympathizers, are saying the guidelines were so restrictive that they oppressed the general population unfairly. Any restrictions on individual freedom and expression always upset the left.  However, the lack of deaths here is a loud answer to such voices.”

According to the latest Johns Hopkins University of Medicine figures, the US now has over 766,000 COVID-19 cases, and 40,905 deaths. Fortunately, these figures remain well below the estimates of between 200,000 and 1.7 million fatalities put out by the Centers for Disease Control.

Democrats Have No Example to Turn To

Woodard says that for Democrats, part of the problem is that they don’t have any real-world liberal left-leaning European country to use as an example for ‘what the US should be doing’, as most of the continent continues to suffer as much as or worse than the US. In fact, he suggests, “Europe and the rest of the countries look pedestrian next to the American public-private partnership arrangement. How do you call for more government control and spending when the examples overseas look so lame compared to the US?”

“Politically, the virus was a gift to Trump, and he handled it well. His opponents are left unarmed for a political election. Voters have short memories, but this whole matter has played to Trump’s advantage, and voters will have to go into the booth in November and decide: ‘Could Biden have done any better?’ That is why Trump has called it a ‘war,’ it works great for him in that description. I think every voter in NY, NJ, MI, CA and WA will say that the federal government gave them more than they needed.  Other voters in OH, PA, AZ, GA and VA will be left with no club to beat the president over the head,” Woodard concludes.

Not everyone agrees with such a rosy assessment about Trump’s reelection chances. “As the United States wrestles with how to move forward in the second month of closures and social distancing in response to the coronavirus pandemic, President Donald Trump faces much criticism for the limited federal response,” says Dr. Meena Bose, political science professor and director of the Kalikow Centre for the Study of the American Presidency at Hofstra University.

“As one of the country’s two nationally elected officials (the other being the vice president), President Trump has a unique responsibility to lead a coordinated plan from Washington on how states may safely prepare to reopen economic activity for work, school, and public spaces. Without strong national leadership, independent state actions will be highly risky for the country as a whole, increasing prospects for multiple recurrences of the virus, which will further hurt the economy and consequently the president’s re-election campaign,” Bose believes.

Americans will go to the polls on November 3, 2020 to elect the president, all 435 seats of the House of Representatives, 35 of the 100 seats in the Senate, and over a dozen state and territorial governorships.