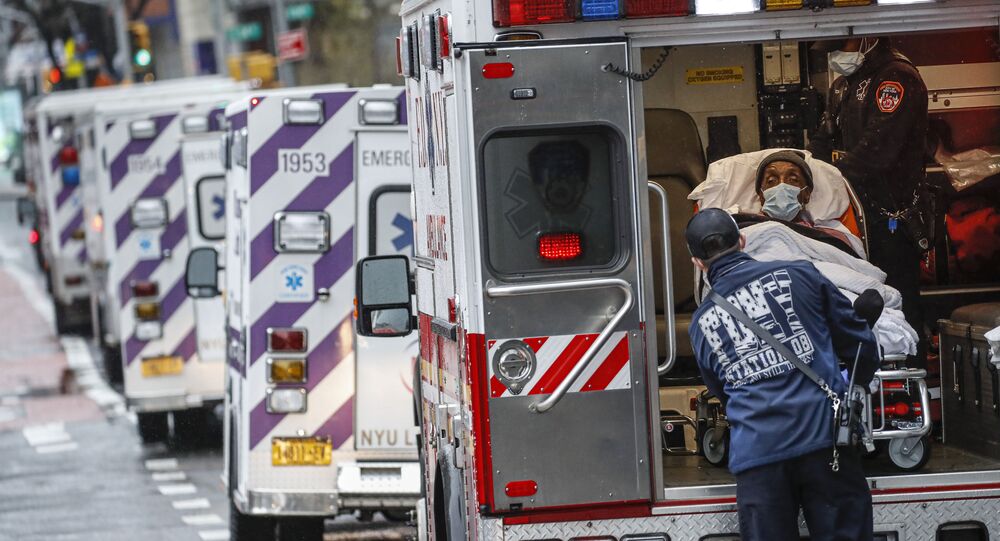 'Racist' Corona or Bad Healthcare: Who’s to Blame for Higher Number of COVID-19 Deaths Among Blacks?

With more than 37,000 deaths from COVID-19 registered in the United States as of 18 April, according to Johns Hopkins University, the pandemic has not only created a strain on the American economy but also highlighted certain vulnerabilities of the national health care system.

Last week, US President Donald Trump argued that African Americans were affected by coronavirus “at a far greater percentage number than other citizens of our country”.

According to officials from the Trump administration, including Secretary of Housing and Urban Development Ben Carson, these numbers could be explained by the fact that many black Americans are more subjected to such illnesses as diabetes or hypertension that often lead to complications from corona infections and eventually death.

Are African Americans Actually More Vulnerable During a Pandemic

Not only black Americans, but reportedly many other minorities in the country have been more susceptible to the ongoing pandemic, says Dr. John Rasmus, professor of economics and politics at St. Mary’s College in California, noting that this should be explained by “less access to health care and to quality health care.”

Dr. Gerald Horne, Professor of History and African American Studies at the University of Houston, believes that this low access to health insurance among African-Americans in particular should be primarily seen as a “class issue”.

It is the legacy of slavery in the United States that has severely curtailed the ability to accumulate capital among African Americans, according to political analyst Don Debar, who believes that it created a long-term impact on their wealth and income, eventually leading to problems with housing and healthcare which in turn created a more likely exposure to various deceases, including coronavirus.

"Tracking the impact of COVID-19 is important because it magnifies the impacts of racism in policy & practice in our U.S. systems. This has been in motion for 400 years (since the first group of enslaved Africans arrived in British North America). What we are seeing now through the COVID-19 pandemic calls for a complete overhaul of American structures which were built on inequity by race and class.  Examples of these structures are access to high quality healthcare including mental health, economics including essential workers that are at increased risk for COVID-19 by occupation and transportation (public or private access to bike or automobile); education (noting some families lack access to the internet and/ or technology to facilitate online learning or telework), and access safe places to exercise and fresh food in their own neighborhoods. This is important to boost immunity and overall well-being", says Milwaukee Health Commissioner Jeanette Kowalik.

COVID-19 Does Not Chose Its Victims by Colour, So Doesn’t Faulty US Healthcare System

Despite Trump’s remark on the higher numbers of corona-related deaths among black Americans, the US government has not officially tracked the spread of the disease among demographic groups, and there might be a reason for that. The absence of sufficient testing suggests that government may not have accurate data, even on the general population, let alone minorities, says Dr. Rasmus.

With more than 702,000 coronavirus cases recorded in the United States as on 18 April, the pandemic has created a strain on the low-income population in general, and the absence of a universal health care system has only exacerbated the danger.

The lack of hazard pay for essential workers, and the recent tensions in relation to Medicaid work requirements, which were supposed to help the most financially vulnerable segments of the population not covered by health insurance but only made the situation worse, as a recent study has shown, proved that much of the American population was left especially vulnerable to the ongoing crisis.

"As more cities and states in the U.S. began to share their COVID-19 data by race and ethnicity, they began to see similar trends especially for deaths (60-70% of the total while the Black population often ranged from a quarter of the population or less). We determined that increased incidence of COVID-19 infection, disability, and death was not unique to Black people in the U.S. Rather, the Social and Economic Determinants of Health (SDOH) were on full display during the U.S. COVID-19 response", Jeanette Kowalik explains.

© AP Photo / Jacquelyn Martin
In this March 25, 2020, photo, Tonisha Wallace, left, and Regina Summers, both with the homegrown clothing company Never Black Down, share a joke during a break in food distribution next to India Blocker-Ford, of Indy B Mentoring, in southeast Washington

“There has been much focus on preventive health care measures in recent years to reduce risks from heart disease, high blood pressure, and diabetes,” says Sean D. Foreman, a professor of political science at Florida-based Barry University. “There are high rates of these particular diseases among Americans and especially in minority populations.”

He notes that this data was available even prior to the pandemic, but the current situation has only highlighted the structural problems with American health care system and shifted the debate more to the position of Vermont Senator and ex-Democratic contender Bernie Sanders.

“The idea of universal health care or ‘Medicaid for all’ was far out of the mainstream in the United States just four years ago. Today it is at the mainstream of discussion”, the expert concludes.

However, even the new $1,200 stimulus check from the US federal government aimed at helping Americans throughout the pandemic with some cash infusion, will not be the one to support students, some categories of immigrants, many low-income earners who did not file for taxes in the last two years and even unemployed high wage earners. The coronavirus has not been “racist” in this regard, but rather “classist”, some may say.

© AP Photo / Ronald Zak
George Soros Reveals the Way to Shore Up Coronavirus-Hit US Economy
“In capitalist economies, the economic structure promotes, encourages, and enables costs and losses to be offloaded downward in the socio-economic system,” says Dr. Richard Wolff, an economist and professor at the New School University.

“The lowest-paid jobs go to those with the lowest social standing (lowest health, lowest educational attainment, etc.). They are more vulnerable to bad diets, inadequate health care, etc, and thus more vulnerable to diseases like Corona virus," the expert concludes.