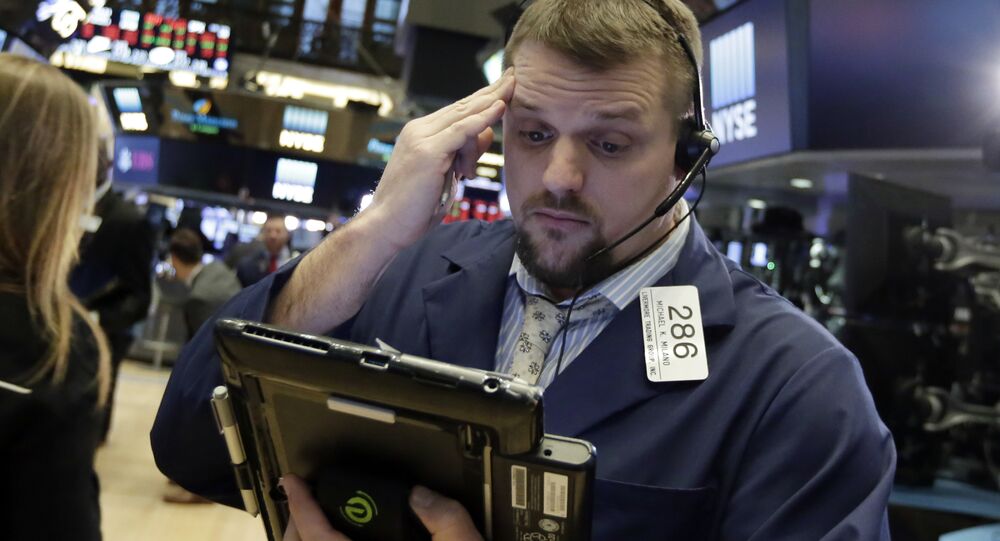 COVID-19 Crisis: US Economy Unlikely to Bounce Back, Gov't May Add Insult to Injury - Economists

The coronavirus pandemic and associated lockdown have dealt a heavy blow to the US economy which could boast steadily rising GDP and dropping unemployment rates just a few months ago. International economists say whether they think the US economy will get back on track any time soon.

The International Monetary Fund (IMF) has warned that the coronavirus-related recession could become the deepest since the Great Depression and the US has already started to reap its bitter fruits: another 5.2 million Americans filed for unemployment benefits last week, according to the Labour Department. In total, the number of jobless claims has climbed to more than 20 million.

​In late March, JP Morgan and Goldman Sachs Group Inc. economists forecast that the US gross domestic product (GPD) would fall at an annual rate of up to 30.1% in April-June, expecting a recovery beginning in the third quarter. However, now JP Morgan is forecasting a 40% GDP decline in the second quarter with the unemployment rate reaching 20%.

'Trillions of Dollars Will be Wasted'

The situation is looking a "little dire", admits Kevin Dowd, professor of finance and economics in the Business School at Durham University in the UK.

"If the US were to experience a short lockdown, then the damage done would be less than it otherwise might, and we might hope for relatively sharp recovery", the academic says. "But if COVID-19 crisis lasts more than a short period, then it will do long-lasting structural damage to the US economy and the economic recovery could take a very long time".

According to him, a US unemployment rate of 20% in the second quarter seems quite plausible. It's too early, however, to make conclusions since the world is in uncharted territory, he says.

That makes 20 million layoffs in one month.

I hope our colleagues come around soon. pic.twitter.com/1IFNChRw4D

​"The best case scenario would be a sharp recession followed by a strong recovery, a bit like the US experienced in 1920-21 in the aftermath of the First World War", he suggests, adding that how long the recovery will take depends on the measures being taken now.

Still, some measures may bring more harm than good if they are poorly thought through, Dowd warns, referring to multiple relief packages being announced by the US government.

"There are packages of measures, some to deal with the medical emergency, some to deal with the economic fallout of the COVID-19 crisis. When I see what they are coming out with, I am horrified. You might say that the right hand doesn’t know what the left hand is doing. Trillions of dollars will be wasted", he highlights.

As White House economic adviser Larry Kudlow announced in late March, the country's emergency stimulus package to bail out the US economy amid the COVID-19 crisis would total $6 trillion or about 25% of the entire US GDP.

'US Follows the Example of Zimbabwe, Bolivia, & Venezuela'

The American economy is "in a real trouble", agrees Dr. Judd Patton, professor emeritus in economics at Bellevue University, Omaha, saying that the US government is making economic matters even worse.

"The pandemic will end in a few months. But the economy cannot handle the massive so-called stimulus package of $6 trillion dollars", Patton says. "It's like a man in a race. To help the poor runner the government puts heavy bricks in his backpack and pockets! He may be unable to finish the race! Inflation, or money debasement by the Federal Reserve, leading to massive increases in the consumer price index, and economic distortions from the bailouts and new money, are heavy bricks indeed to recovery".

He says that in order to return to economic growth and prosperity the nation needs to embrace a free market approach, "not more regulation and business interference, budget deficits and national debt, and especially legalized money printing by the Federal Reserve".

According to the economist it's a "distinct possibility" that the unemployment rate will reach 20% in the near term, especially given that the US government's stimulus package has incentivized many people to remain unemployed because they can make more on unemployment compensation than they can working.

To add insult to injury, "the business bailouts in the stimulus package work against market adjustments and adaptations to the new economic reality", Patton says, stressing that businesses are urging the government to give them even more money as if $6 trillion is not enough for them. As a result, the US could find itself amidst an "inflationary depression" repeating the fate of Zimbabwe, Bolivia, and Venezuela, he warns.

'US Will Recover Jobs Quickly'

For his part, Daniel Lacalle, professor of economy and chief economist and investment officer at the company Tressis Gestión, Spain, believes that the situation is not as gloomy as it seems: though the unemployment rate figures are "very negative", the US does recover jobs very quickly, unlike the EU.

"Well, obviously, we are seeing now levels of unemployment that look similar to the Great Depression", he notes. "But it can go higher. But one thing that is true is also that the rate of jobless claims is coming down. So on a positive note, there is also some the rate of jobless claims is not is not going up now. It is likely that unemployment reaches between 18 to 20 percent at the end of this month. And that if the economy opens in May, it goes from 18 to 5 percent by September".

According to Lacalle a lot depends on when the US will start to re-open its economy. Though "this is subject to enormous uncertainty" one may expect the beginning of gradual opening either in early or late May.

We are having very productive calls with the leaders of every sector of the economy who are all-in on getting America back to work, and soon. More to come! #MAGA

​"For example, I know that Texas is looking at opening the economy rather quickly and that other states, probably like New York or California, will likely take longer", he suggests.

As for new stimulus packages, the economist is expecting another stimulus bill approved by Congress before the end of the lockdown. He deems that both Democrats and Republicans will reach compromise on this issue, suggesting that the new financial measures "would likely be more geared towards small and medium enterprises that are going through a difficult patch right now".