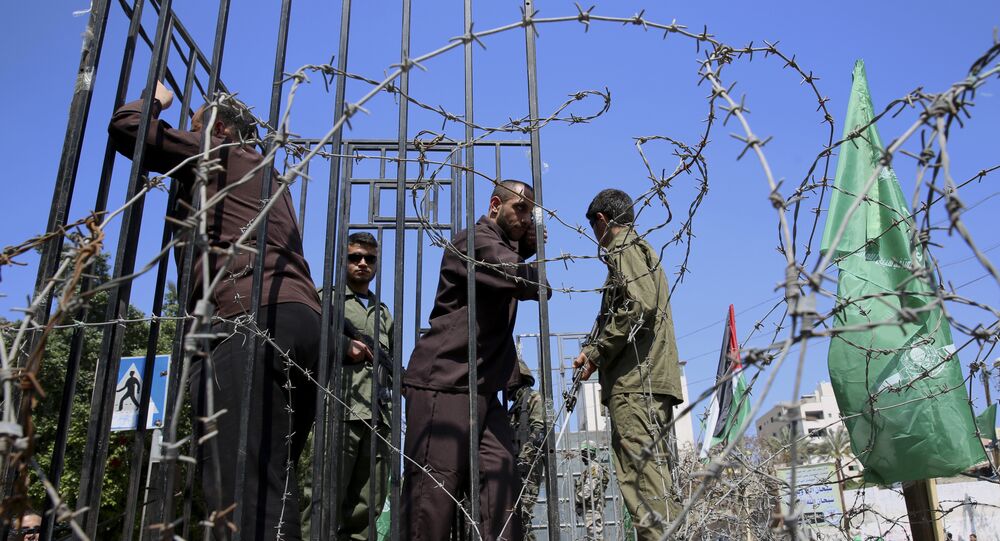 Limited space, overcrowding, and poor hygiene make Israeli prisons a hub for the spread of COVID-19, the head of a human rights group that caters to the rights of Palestinian prisoners believes. But Israel's Prison Authorities reject these claims saying they are doing everything in their power to keep the pandemic at bay.

April 17 marks Palestinian prisoners' day when the Palestinian people collectively remember and honour more than five thousand prisoners incarcerated in Israeli jails. Many are serving long sentences for the murder of Israelis, while others are being held without be charged or having been tried.

Every year Addameer, a Palestinian NGO that caters to the rights of Palestinian prisoners and provides them with legal support, raises awareness of what's going on inside those prisons.

In 2015, for example, they represented Palestinian prisoners in their fight against Tel Aviv's decision to ban the use of public phones inside prisons. That battle was won in 2019 with Israel's Prison Authorities deciding to ease the restrictions, granting access to phones to some teenage and female inmates.

This year, however, their fight is different and it is directed against COVID-19, which has been raging in Israel since February and has claimed the lives of more than 130 Israelis. Over 12,000 others are still being treated in hospitals across the country.

"[During this difficult period], Israel decided to stop all family visits. At the same time, they haven't stopped arresting people. Those detained are brought to the already crowded prisons and held in difficult conditions. Some of them have no ability to shower or even change clothes", Sahar Francis, director of Addameer said.

According to official data released by the Ministry of Justice in 2019, prisoners in Israel, whether they are serving a sentence for terrorism or criminal offences, have as little as three metres of space for each. This number is not only low compared to other countries where prisoners have an average of eight metres, but it is also below what Israeli law stipulates ordering jails to provide their prisoners with at least four to five metres of space.

© REUTERS / Mohammed Salem
A Palestinian policeman stands guard as a woman, wearing a mask as a precaution against the the coronavirus disease (COVID-19), waits with other people outside a bank to withdraw cash, in Gaza City March 29, 2020

The practical meaning of this is cells built to house some eight prisoners hold twelve or more inmates, according to a prison condition report from May 2019 by the Ministry of Justice.

Yet, despite overcrowding, Israel's Prison Authorities haven't registered any COVID-19 cases among Palestinian prisoners with the exception of one disputed incident revolving around the release of 18-year-old Nur A-ddin Maher who allegedly tested positive for the virus right after he was released from the Ofer prison located next to Jerusalem.

Israel denied the allegations put forward by the Palestinian Authority suggesting he had contracted the virus in prison and demanded a medical examination be done on Maher. Demands that have so far gone unanswered.

Answering an official request for a comment, the Prison Authority said that there haven't been any coronavirus cases in Israeli prisons because of the measures they introduced during the early stages of the outbreak.

"We have cancelled family and lawyers' visits but it was done in order to protect prisoners from potentially getting the virus. As for allegations that sanitation standards are lacking, these claims are groundless".

Apart from providing prisoners with masks and disinfecting equipment, the Prison Authorities say they make sure to clean and disinfect the prison cells and facilities.

In an attempt to educate the masses about the dangers of COVID-19 and the way to contain the spread of the pandemic, they have also introduced a number of videos screened on a daily basis in Arabic to guide prisoners on the dos and don'ts during this time.

For Francis, however, these regulations are certainly not enough.

"[Following the case of Maher], prisoners asked to be checked but all Israel did was to measure their temperature. No blood samples were taken. More alarming though is the fact that prison guards, who check up on prisoners at least five times a day, fail to wear masks. There is no need for them to enter each cell physically, they can monitor their movement through cameras, without putting prisoners' lives at risk".

To change this situation and improve the lives of Palestinian prisoners, Addameer, who joined forces with other human rights groups, appealed to official Israeli institutions as well as international bodies to "remind [Israel] of its obligations".

"It is the direct responsibility of the occupying power to take care of the health and safety of its prisoners. It is irrelevant which offence they committed, Israel should take care of all of them. While other countries are releasing prisoners, Israel insists to keep the 180 teens - whose only crime was to throw rocks - behind bars. The same holds true for females, elderly, and sick prisoners", Francis complained.

At the end of March, UN High Commissioner for Human Rights Michelle Bachelet urged states to release prisoners in an attempt to reduce the overcrowding of prisons and block the potential spread of COVID-19.

© REUTERS / MOHAMMED SALEM
A policeman, wearing a mask as a precaution against the the coronavirus disease (COVID-19), stands guard as Palestinians wait outside a bank to withdraw cash, in Gaza City 29 March 2020.

Several Middle Eastern countries have already followed the recommendation given by the UN. In March, Egypt released scores of political prisoners. Bahrain did the same, letting go 1,500 prisoners including around 300 political detainees, while Iran has reportedly set free some 85,000 people.

"This is exactly what Addameer and other Palestinian groups are trying to achieve", said a source from Israel's Prison Authorities who asked not to reveal his name. "They spread fake news about the coronavirus in Israeli prisons and make comparisons to other countries that have released detainees in order to put pressure on the Jewish state and force it to follow suit", he added.

But Israel is not planning to budge unless it obtains something in return, just as was the case in 2009 when Tel Aviv agreed to release 25 female prisoners in exchange for a video of IDF soldier Gilad Shalit who was violently kidnapped in 2006.

This time around, reports suggest that the Jewish state is now leading negotiations with Hamas, the Islamic group that controls the Gaza Strip and considered a terrorist outfit by Israel, on the release of hundreds of Palestinian prisoners in exchange for information on slain IDF soldiers Hadar Goldin and Oron Shaul, whose bodies have been held by the group since the 2014 operation Protective Edge.

Although the details of the potential deal haven't been finalised yet, reports suggest that Egyptian intelligence has already received a draft offer proposed by Hamas and Francis says "it would be the right time to carry out a swap".