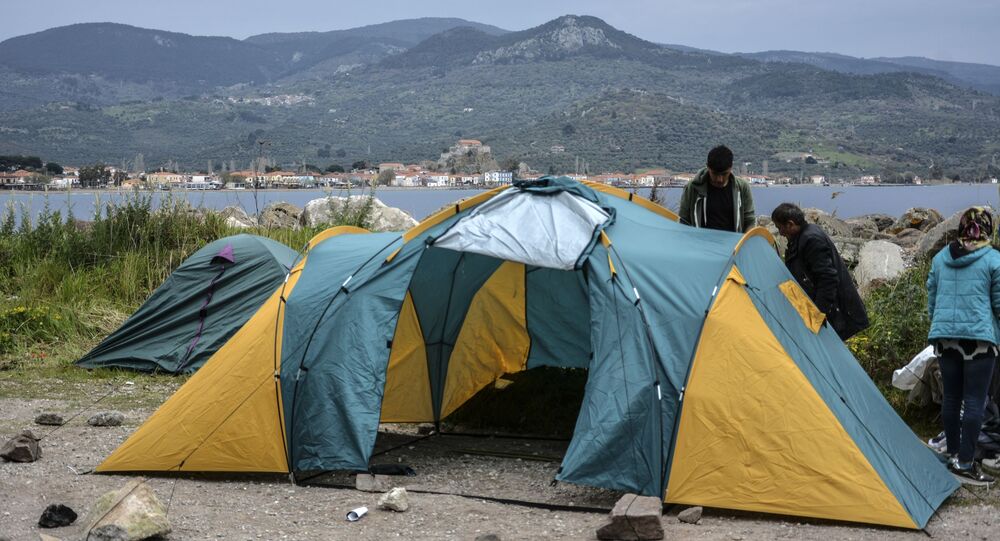 Ticking Bomb: Asylum Seekers on Leros Take Matters Into Own Hands in Bid to Curb Spread of COVID-19

Crowded camps on Aegean islands could turn into a hub for the spread of the coronavirus. Although authorities are taking the necessary measures to contain the pandemic, asylum seekers are concerned that it is only a matter of time until the situation deteriorates. So they've decide to act to prevent that from happening.

COVID-19 has spun out of control in Italy and Spain, where the economic crisis of 2008 dealt a severe blow to the countries' health systems. But in Greece who also suffered major losses due to the crisis, the pandemic seems to be holding steady, despite the country's medical budget being slashed by 50 percent between 2010 to 2015 and 35,000 Greek doctors leaving for Germany in search of better opportunities.

The reason for this success, reports suggest, is the Greek authorities' decision to implement restrictions at an early stage as well as the public's obedience to the law that ordered them to stay indoors or isolate themselves if they show symptoms of the virus.

But while on the mainland, the coronavirus seems to be on a leash, in packed migrant camps located on the Greek islands social distancing and self-isolation are luxuries many cannot afford.

Such is the case on the island of Leros that houses one of these camps. This is where asylum seekers first arrive while authorities check their backgrounds and provide them with the necessary papers. With a capacity of no more than 900 people, it is now home to 3,000 asylum seekers from the Middle East, North Africa, and Asia residing in tiny caravans built less than two metres apart from each other and that often accommodate eight or more people.

It was for this reason that at the beginning of February the UNHCR urged the Greek authorities to increase efforts to put an end to the alarming overcrowding in the camps and transfer some of the asylum seekers to appropriate accommodation on the mainland.

However, handling thousands of asylum seekers, living on the five Aegean islands, was not an easy task. In an attempt to contain the spread of the virus, in mid-March authorities imposed a number of restrictions set to last for a month.

These include a restriction on asylum seekers leaving the camp between certain hours as well as a ban on new arrivals.

Taking Matters Into Their Own Hands

Authorities are also trying to improve sanitation and hygiene within the camps but these efforts were insufficient, prompting a group of asylum seekers on Leros to take matters into their own hands.

"I gathered five volunteers who came here from Gaza and together we went on a mission of cleaning the territory to stop the spread of the virus", said Mohammed Al Taluli, an asylum seeker who arrived on the Greek island in October after fleeing persecution in his native Gaza and who now lives outside the camp due to his poor health.

And he says the initiative was met with a lot of enthusiasm from the local population and the Greek authorities that provided the group with sanitation tools and cleaning equipment.

Residents of the camps, however, met the move with a lot of skepticism and even indifference.

"One of the main problems is that a lot of the asylum seekers were unaware of what the virus was and how it spread. Nobody has TV sets, lots of them do have phones but have no access to internet so they don't know how serious the situation is", explained Al Taluli.

Gradually, things started changing after authorities who recognised the importance of the move gave Al Taluli and other activists loud speakers to spread the word of the pandemic and urge asylum seekers to join together to combat the virus. Yet, only thirty of the camp's 3,000 residents decided to participate in the initiative, and those who did take part, wanted to give up on the initiative several days after it kicked off.

"Many still don't realise that this is a ticking time bomb that will eventually go off. If the virus reaches the camp, many will not be able to survive".

The camp does have medical personnel who attend to asylum seekers' needs on a regular basis. Those who have serious health conditions are often transferred to hospitals outside of the camp but if an outbreak of the virus occurs the area's medical institutions will not be able to cope with the crisis, believes Al Taluli.

Yet, he is hopeful that eventually people will realise the importance of hygiene to keep the virus at bay. "We aim at having a representative from each caravan participate in the cleaning initiative and I am sure that we will soon reach this goal, especially given the fact that we will step up our advocacy with the help of posters and banners [explaining the dangers of COVID-19] that will be spread all over the camp".