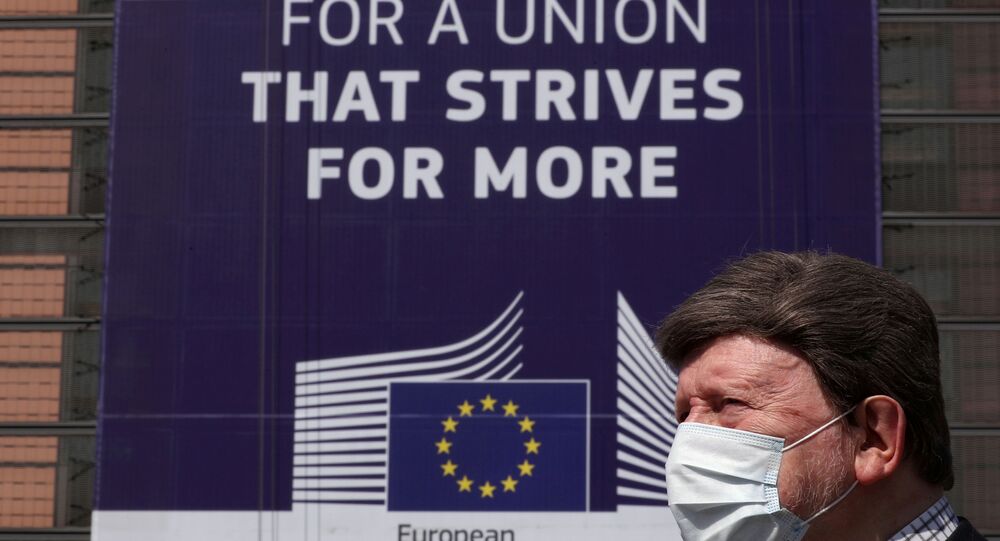 BRUSSELS (Sputnik) - The Eurogroup, an informal association of eurozone finance ministers, said on Thursday that it had agreed to work on a temporary recovery fund to tackle the economic consequences of the COVID-19 pandemic for the bloc, but the details and amounts envisioned by the fund are not clear.

The fact that the main details about the agreed fund remain unknown raises questions across the European Union. Moreover, the deal about the new recovery fund is reached in addition to already agreed measures to allocate 550 billion euros ($602 million) for the COVID-19 response.

It is not yet clear whether the fund envisions grants or loans for the countries most affected by the coronavirus.

"Some member states expressed the view that this should be achieved via common debt issuance; other member states said that alternative ways should be found," Eurogroup President and Portuguese Finance Minister Mario Centeno said on Thursday.

Centeno did not disclose what alternative ways are to be considered, so it is up to the European Council and heads of states of EU members to make a final decision.

The new decisions barely go further than what had been announced earlier. Besides, there is no clarity on the so-called coronabonds — Eurobonds that will help overcome the economic consequences of the coronavirus pandemic — as well. Italy, Spain and other southern European countries have been asking for the issuance of coronabonds since late March but so far the northern states are not backing this idea.

"We are committed to do everything necessary to meet this challenge in a spirit of solidarity. A coordinated and comprehensive strategy is necessary to deal with health emergency needs, to support economic activity and to prepare the ground for the recovery," the joint declaration of the Eurogroup ministers, which was agreed following the meeting on Thursday, said.

According to the Eurogroup, there is a "flexibility in EU rules." On March 23, the finance ministers agreed with the assessment of the Commission that the conditions for the use of the general escape clause of the EU fiscal framework were fulfilled.

© REUTERS / ITALIAN PRESIDENCY
‘Risk of Failure Real’: Italy's PM Giuseppe Conte Warns Coronavirus Could Bring About EU’s Downfall
This made it possible to abandon the rule that the deficit of the member state's budget should not exceed three percent, and that the level of the national debt should not exceed 60 percent of GDP. The EU members are now allowed to spend more and without limits.

Moreover, the European Commission issued a specific temporary state-aid framework to expedite public support to companies. The Commission will also use all the flexibility offered by the EU public procurement framework in this emergency situation.

The Eurogroup came up with further measures for a coordinated response to the economic fallout triggered by the COVID-19 pandemic, as requested by the EU leaders on March 26.

"Today [Thursday], we agreed upon three safety nets and a plan for the recovery, to ensure we grow together, not apart, once the virus is behind us. These proposals build on our collective financial strength and European solidarity. We also had a first discussion on a proposal for a temporary recovery fund, which would turbo-charge the European investments that we will need to build a better, greener, more resilient and more digital economy," Centeno said.

The European Central Bank (ECB) and the central banks of the EU member states are not allowed to issue Eurobonds, which are currently demanded by Italy, Spain and other countries most affected by the health crisis.

"The European Central Bank and the central banks of the Member States, hereinafter referred to as" national central banks ", are prohibited from granting overdrafts or any other type of credit to Union institutions, bodies, offices or agencies, central administrations, regional or local authorities, other public authorities, other bodies or public undertakings of the Member States; the direct acquisition from them by the European Central Bank or the national central banks of their debt instruments is also prohibited," the 123rd article of the Lisbon Treaty has said.

This situation is identical for all the Eurogroup countries, Charles Gave, an economist representing the Paris-based Institute of Liberties, told Sputnik, adding that EU member-states can not do what treaties forbid.

"European member states can not do what the treaty forbids, full stop. Expect if they decide to renegotiate the European treaties. It is the highest legal level. Moreover, the German constitution also forbids it; No direct lending to other countries, except if two-thirds of the Bundestag members approve it," Gave said.

According to Gave, if treaties are overlooked, then the whole European system might experience a big failure.

"The construction of a mythical European state, started by Jacques Delors when he was president of the European Commission, this supranational non-elected Europe, it does not work," the economist added.

He also said that the EU can not be reformed, but the union needs "exchange rates corresponding to economic realities."

The economists even mentioned that the EU member states should consider "Bruxit" - an exit from the Brussels system and re-creating another alliance with more "subsidiarity and creativity."

There have been voices of dissatisfaction regarding the Eurogroup’s new measures across the continent, from economists and politicians alike.

"Indeed, the 19 Eurogroup ministers of finance could not decide to go for coronabonds. We have the confirmation of the middle solution," Etienne de Callatay, an economist at Orcadia Asset Management in Luxemburg, told Sputnik.

According to Callatay, the best solution would be a "joint loan" from the European Commission. Another option is for the European Central Bank to cancel national debt securities for countries according to how much they are affected by COVID-19.

"It is fascinating to note that the main decision taken by the Commission consisted of telling EU countries that they should no longer … respect the budgetary and regulatory constraints that it has imposed on them for years," Francois Asselineau, the former candidate to the French presidential elections and president of the Popular Republican Union party, told Sputnik.

Asselineau added that the EU institutions are relaxing their own rules and allowing member states to act at a national level.

Philippe de Villiers, the head of the conservative and eurosceptic Movement for France political party, told reporters that the coronavirus might trigger the fall of the Schengen agreement and the Maastricht criteria.

© REUTERS / Michel Kappeler
Merkel Says Germany Rejects Eurozone 'Coronabonds'
Meanwhile, Gilles Lebreton, a member of the European Parliament, said that the economy and businesses should be revived amid the pandemic.

"It is certain that we will have to revive the economy and support businesses to get out of the present crisis. Certain European solidarity is possible but will have to remain closely controlled by the member states. It already started, as [David] Sassoli, the president of the European parliament, is excluded from the current European meetings," Lebreton told Sputnik.

In Germany, the opposition Alternative for Germany (AfD) party agreed with the government about the coronabonds issue.

"Germany and the Netherlands are rightly opposing it. German tax money would flow into the general state budget of these countries completely uncontrolled and unrestricted," Alice Weidel, the chairwoman of the AfD parliamentary group in the Bundestag, told Sputnik.

According to Weidel, German Chancellor Angela Merkel should not be blackmailed by Italy and Spain, "as is so often the case."

Nonetheless, these negative reactions did not make an impact on the EU’s leadership in any way.

"This plan has to relaunch our economies whilst promoting economic convergence in the EU. The EU budget will have to play a meaningful role here. Together with the President of the Commission, I am working on a Roadmap and Action Plan to ensure the well-being of all Europeans and to bring the EU back to strong, sustainable and inclusive growth based on a green and digital strategy," European Council President Charles Michel said.

According to Michel, measures announced by the Eurogroup represented a significant breakthrough for the EU economy and would be submitted to the next meeting of the European Council, scheduled for April 23.