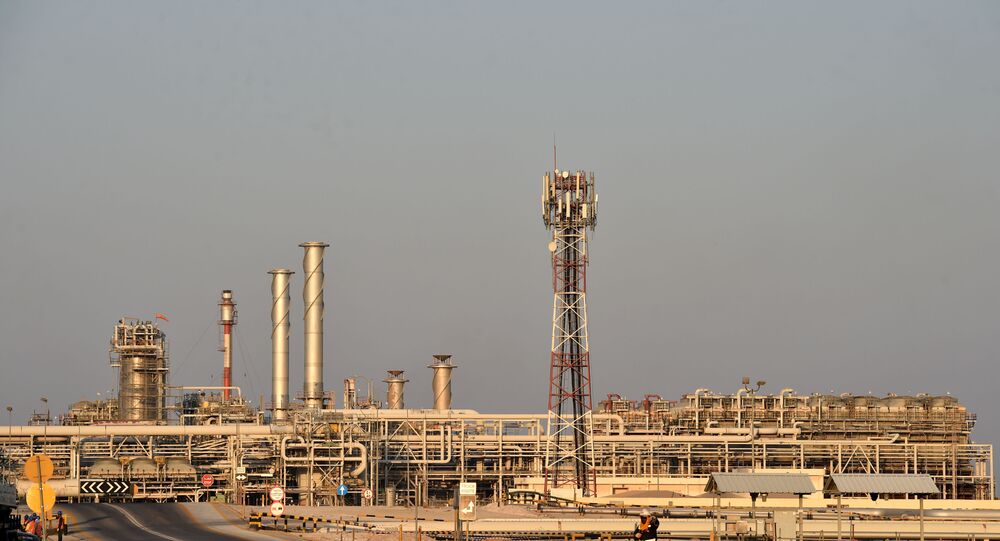 OPEC members have agreed to reduce oil production by about 10% amid a slump in demand caused by the coronavirus pandemic. Oil output will be cut in May and June by 10 million barrels per day, to be gradually eased until April 2022.

Justin Dargin, a global energy scholar at the University of Oxford, shares his predictions on the future of the international oil market ahead of the Saudi-led conference call between G20 energy ministers later in the day.

Sputnik: Russian energy minister Novak said that Russia believes it is reasonable for more countries to join the effort to stabilize the oil market. What signals does this send to other countries amid the upcoming G-20 energy talks?

Justin Dargin: The signal that this sends is that Russia feels other major oil-producing countries have been riding on its coattails, taking advantage of Russia's production restraint. Russia, in general, views that it is not advantageous for OPEC+ to adopt large production cuts while other countries, such as the U.S., and less so, Canada, benefit and acquire market share at its expense. It appears that Russia would prefer to either see its quota reduced, other countries agree to reduce production or force a de factor production reduction on other major producers by driving down prices. Additionally, it also telegraphs that Russia will not negotiate a satisfactory agreement unless American, and perhaps, European production is reduced. Russia desires to uphold its national interest in any forthcoming negotiations. Russia believes that price stability requires a global effort that cannot only be undertaken by itself or OPEC+ alone.

Sputnik: How effective can multilateral cooperation be in this case and what measures will be taken to stabilize the energy market, in your view?

Justin Dargin: Multilateral cooperation is essential for energy market stabilization. Typically, Saudi Arabia, with its enormous spare capacity was able to influence the global oil market by simply increasing or decreasing its oil production. Yet, Saudi Arabia's position in the oil market has weakened as new oil production has come online, especially shale and other unconventional oil. The onset of the COVID-19 pandemic created a significant amount of demand destruction, potentially reaching 35-40 m/bd later in the second quarter.

Most of the major oil-producing countries agree that price stability is essential for all parties. One of the major issues, though, is that oil production in the U.S. and Canada is not under the mandate of national oil companies, there are many large and small producers. As a result, it would be extremely difficult to adopt a production quota in North America. It is possible that state and federal regulators could implement production limits, but it would be in the face of pressure from the American supermajors. It bears mention that the template for OPEC's creation was the Texas Railroad Commission during the early twentieth century that imposed unitization on all production in the state to balance the disastrous boom and bust cycle. So, it is not outside of the realm of possibility that the U.S. could implement reduction nationally, but it is exceedingly unlikely.

The primary method that OPEC+ considers that shale oil production can be moderated is through market pricing. Reaching out for political consensus with the G20 is a type of gamble, particularly as COVID-19 continues to sweep the world unabated. Overall, it is likely that OPEC+ members recently agreed-upon production reduction of 10 m/bpd is meant to mitigate market volatility, while simultaneously not allowing non-OPEC+ members to have unfettered production, such as maintaining the price level at below the average breakeven price for American producers.

Sputnik: In your view, which country or countries does this statement relate to? To what extent would the major players in the market such as the US agree to multilateral cooperation?

Justin Dargin: This statement would apply mostly to the US, but also other oil-producing countries such as Canada and Brazil. OPEC+ is expected to ask the oil-producing countries in the G20 to agree to a 5 m/bd production cut. This would be difficult for countries such as Canada and the U.S., that have a liberalized oil sector. U.S. companies cannot coordinate together as it runs afoul of domestic antitrust laws. Additionally, the U.S. domestic oil industry is against any national reductions. The only method by which the U.S. could reduce production is if the federal or state regulators set production targets.

Sputnik: What is your further prognosis, given the fact that oil price growth accelerated on Thursday afternoon by 4-6% in anticipation of an OPEC + meeting?

Justin Dargin: The reason that oil prices trended upward was that the market assumed that Russia and Saudi Arabia would agree. But, this was basic price fluctuation and not due to the structural dynamics of the sector. For any continued increase in global oil prices to endure, it would depend on the structural demand/production dynamics of the sector.

Sputnik: UBS Bank Analysts argue that at some point, enthusiasm will subside, and the reality of the magnitude of the imbalance in demand will ultimately hit the oil market. Do you agree with this forecast? What are your further forecasts on this issue?

Justin Dargin: Yes, this is correct. The COVID-19 pandemic is unprecedented in recent history. The demand destruction is quite real. Depending upon the spread, and consequently, the containment of the virus, it could go even broaden the 30 m/bd already taken off the market. It seems likely that the demand destruction will continue as a significant percentage of the world's population is under quarantine, along with air travel largely stopped. However, there is the potential for a slight rebound if vaccination is deployed within the next several months, the summer months mitigate the spread of the virus, or the gradual reopening of the world's economies happens before lasting damage is done.

Nonetheless, any upward spike that we see in oil prices before the fundamentals are well understood is just temporary. Eventually, the structural dynamics of the market will balance and oil prices will be within a price band. It is also important to mention that COVID-19 is already striking oil production in many countries, such as some sites and personnel have to be quarantined. It remains to be seen the potential impact of this. However, if COVID-19 continues it warpath among oil sector workers, it could cause more of an impact than any political agreement to reduce production.

Sputnik: Tomorrow there will be a meeting of the G20 ministers of energy on the stability of energy markets. In your opinion, will countries manage to agree on a reduction in oil production to support oil prices?

Justin Dargin: It seems highly unlikely that the U.S. will agree to a production reduction due to the constraints of domestic antitrust laws as well as intense lobbying against such reductions from the American oil industry. That being said, President Trump did state that he would be amenable to a production reduction of 10-15 m/bd. This would assist the smaller oil companies, particularly in Texas. And, the American based oil sector has significant power inside Washington D.C. But, the larger companies, such as  ExxonMobil and Chevron, are against any production regulation. While the domestic U.S. economy is in a slump, President Trump could face a downturn in support during a crucial election year. This is quite likely to be at the forefront of his mind.

Most of the G20 members do not have much to gain by coordinating production cuts with OPEC+. In terms of Europe, Norway is the only country that signalled it could agree to production cuts, but it is not a member of the European Union nor of the G20. The EU member states, for their part, do not see much upside from reducing production.
And, the UK, China, and India are net importers. Furthermore, the domestic opinion in the UK would be against any production cuts which could increase oil prices in the face of an economic downturn. And, the less wealthy members of the G20 would only support lower oil prices. Even though a global agreement that would create price stability is in the best interests of the global community, a golden mean would be ideal. One that would not place too much pressure on consumers that are suffering an enormous economic burden, while also supporting oil-producing countries to maintain their economic health.