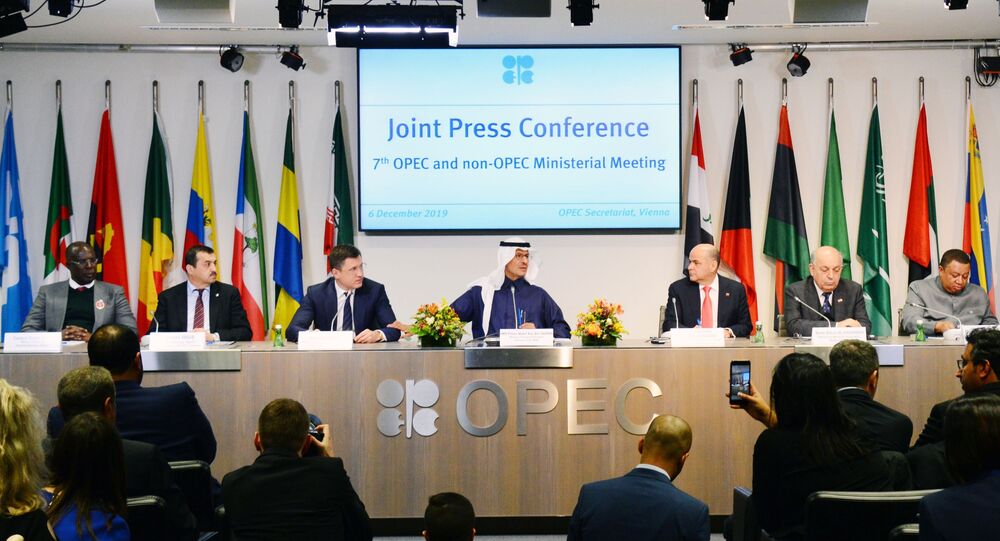 OPEC+ members, as well as third-party countries, will be dialing in on 9 April to determine a new course of action to change the situation on the bearish energy market caused by oversupply and the global coronavirus outbreak.

The ongoing drop of in global oil prices in 2020, which slid from around $68 in January to around $22 per barrel for Brent by the end of March, has urged global crude exporters, members of the OPEC+ deal, to meet again this week after an old deal collapsed in March. However, even as oil companies' profits diminish due to the crisis in the energy market, there are no guarantees that a new agreement on output reduction will be signed.

Saudi Arabia has been losing market share since 2014 to a new competitor - American shale oil companies, who shot the US to the top of world oil production with 12.23 million barrels per day, as opposed to Saudi Arabia's 11.5 million, Francis Perrin, Senior Fellow at the French Institute for International and Strategic Affairs, says.

Saudi Arabia is using low crude prices in an attempt to undercut American shale oil companies, as it had purportedly done on several occasions in the past to regulate its market share, Edward Moya, senior market analyst at OANDA in New York, suggests.

"In 2014, Saudi Arabia had US shale right where they wanted them. Oil prices collapsed from $100 to $30 and many US shale drillers were going out of business. If Saudi Arabia could have held onto lower prices for a little longer, the US shale revolution would have ended", Moya opines.

Ever since Riyadh abandoned this tactic and endorsed output cuts under OPEC+, these shale companies have been gradually taking back the market shares of oil-exporting countries, including Saudi Arabia, who is not eager to end the period of low prices, Moya says. The current drop in crude prices might be a part of the Saudi strategy to regain positions on the energy market, Francis Perrin believes. He indicates that it's not the first time Riyadh has stepped back from its practice of "defending " oil prices for itself and OPEC in order to restore lost market share.

"One of the consequences of this strategy may be the loss of market share. From time to time, in exceptional circumstances, as in the mid-1980s or from the summer of 2014 to the beginning of 2016 or in March-April 2020, Saudi Arabia decided to change its priorities and to defend its market share", Perrin noted.

One of the key markets that Saudis have lost over the past 11 years was America, Perrin says, adding that US shale companies not only captured it, but also went for Riyadh's stakes in other regions around the world. However, Saudi Arabia's pricing strategy might have actually contributed to their loss of the American market, along with other factors, Dr Mamdouh Salameh, an oil economist and Professor of Energy Economics at the ESCP Europe Business School, suggests.

© AP Photo / Hasan Jamali
In response to the high cost of US shale, Saudi Arabia has been selling its massive stockpile of crude oil at rock-bottom prices.

Washington may have realised that Riyadh was trying to slow down if not "kill", the American shale oil industry, the economist points out. He adds that Saudi Arabia's focus on Asian markets and alleged involvement, denied by Riyadh, in the 9/11 terrorist attacks on the US also contributed to their loss of the US energy market.

In light of the US shale oil companies making use of every production cut achieved by OPEC+, the members of the alliance have little incentive to agree on a new deal if it doesn't involve American participation, Salameh says. Washington is unlikely to take part in such agreements and hence the upcoming OPEC+ meeting is "doomed to fail", the economist stresses.

"President Trump is already saying that only free markets will determine US production cuts. […] This raises a question about where were the free markets then when US shale oil producers were taking advantage of OPEC+’s cutting production to bolster oil prices with US shale producers producing excessively even at a loss and trying to cap oil prices in the market place", Salameh indicates.

Trump might actually turn the ongoing oil price war to his advantage, using it as a convenient pretext to introduce taxes and tariffs on foreign crude imports in a bid to help the American shale oil industry in difficult times, the pundit stresses. Salameh adds that the alternative for Trump would be to bail them out using American taxpayer money.

Still, a new OPEC+ deal remains possible, Francis Perrin from the French Institute for International and Strategic Affairs believes. Saudi Arabia could be interested if the price regulating alliance is joined by other oil-producing countries such as Canada, the UK, Norway, Brazil, and the US, Perrin points out. The pundit adds that in this case, the new OPEC+ target will be to lower global crude output by 10% or around 10 million barrels per day.