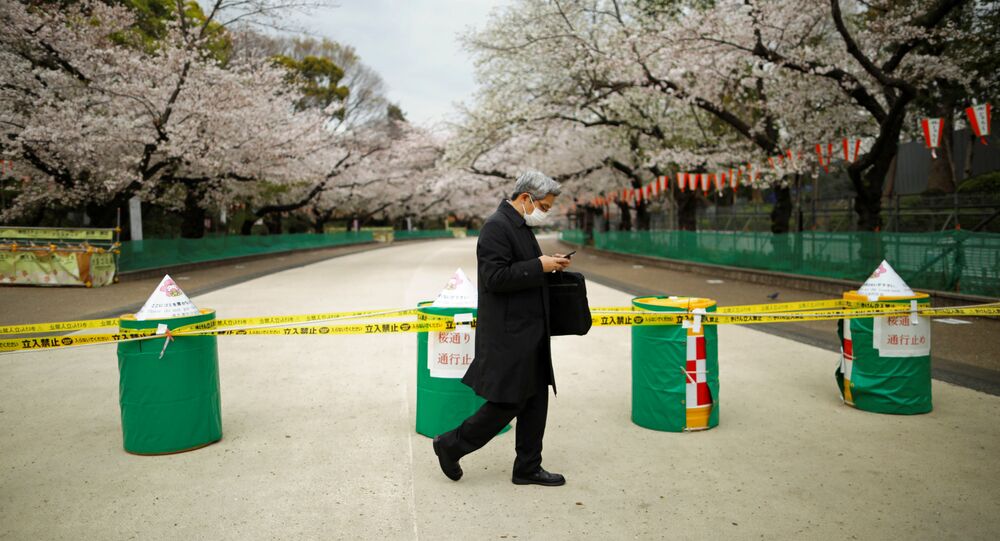 Though nearly a month ago the Japanese government pledged to hold the Tokyo Olympic Games as planned, the country has now been forced to declare a state of emergency. Japanese risk management and health experts have explained the sudden rise in COVID-19 cases in the country.

On Tuesday, Japan declared its first-ever state of emergency until 6 May covering seven prefectures, namely, Tokyo, Osaka, Saitama, Kanagawa, Chiba, Hyogo, and Fukuoka amid the steady growth of coronavirus cases across the country. As of 7 April, 3,906 COVID-19 cases have been confirmed with 80 deaths.

Earlier, Prime Minister Shinzo Abe asked the International Olympic Committee (IOC) to postpone the much anticipated Tokyo Olympic Games initially scheduled to begin in July 2020 by one year over the pandemic. The Japanese government has long hesitated to make the decision especially given that the country has spent over $12 billion on the event. On 14 March, Abe pledged to hold the games as planned in July as the host country appeared to have the coronavirus under control. However, over a few subsequent weeks things have drastically changed.

At the beginning of March, Japan did not have as many coronavirus cases as Europe, though tensions began to mount, recollects Katsuyuki Kamei, an expert on risk management and professor at Kansai University.

"Japan faced different situation, compared with other countries", he says. "Even as we saw the situation in France, which implemented a drastic lockdown, or the terrible situation in Italy, we had kind of optimism in Japan. And up to 25 March the government and the prime minister still had hope to host the Olympic Games during this year".

The professor notes that there were even critical rumours among some Japanese individuals who suspected that the government was "trying to minimise the number of those infected because they wanted to show that Japan was safe for the Olympic Games". Nevertheless, in mid-March the people of Japan looked forward with optimism, he says.

"Starting the 19th of March we had three holidays in consecutive days when we take a walk and enjoy ourselves", Kamei recalls. "And this was the beginning of the worsened situation we have now. After postponing the Olympic Games the number of contaminated people started to increase. Since then we hoped that the government would declare the state of emergency for ten days. And today the prime minister finally did so".

There is yet another reason behind Japan's state of emergency which is related to supposed flaws in the healthcare system's response to the pandemic, presumes Masahiro Kami, a physician and head of the non-profit Medical Governance Research Institute.

"The Japanese medical administration is controlled by the central government, but the degree of control is much weaker than in China", Kami elaborates.

The first coronavirus case was confirmed to have spread from China to Japan in mid-January. A month later, cruise ship Diamond Princess was put in a 14-day quarantine in the Japanese port of Yokohama after an 80-year-old passenger tested positive for COVID-19 after getting off the vessel in Hong Kong earlier in the month. Despite the Japanese health officials' efforts, the ship-related cases apparently triggered a new chain of infections in the country. According to the physician, many cases remained overlooked because of insufficient COVID-19 PCR testing in Japan.

"Researchers in public health and basic medicine play a central role", he says. "The challenge given to them is to keep pathogens out of Japan from abroad. They focus on quarantine and infection cluster studies. That is why they stuck to quarantine cruise ships. They are not very interested in the epidemic situation in Japan. It is the job of a general clinician, and they have no budget or authority for it. Because of this, they continued to oppose the use of PCR tests in clinics".

As a result, it appeared that the number of infected people in Japan was high enough to cause alarm, according to the physician. He further presumes that it also played into the hands of "the Abe administration, which wanted to promote the Tokyo Olympics".

"For this reason, Abe did not object to the Ministry of Health, Labour and Welfare not increasing the PCR, and the media in Japan who dislike Abe did not express their opposition [either]. This is why the new coronavirus has spread in Japan and the Abe administration has now declared an emergency", Kami concludes.

State of Emergency May Bear Fruit in 'Two Weeks'

In contrast, Dr Kazuaki Jindai, medical epidemiologist, and member of a COVID-19 cluster task force within the Japanese Ministry of Health, asserts that the situation is under control.

"Japan has a specific strategy to deal with the coronavirus outbreak", he explains. "Our strategy is multifaceted including a cluster measure. If we find a patient or case, then we try to find a common source or pattern, so that we can find out who else was infected with this common source or pattern. So, we find the clusters and make sure we stop the links, the connections of these clusters and thus, stop the spread of the disease".

Dr Jindai outlines three common conditions, or the three C's that facilitate the infection: first, closed spaces with poor ventilation; second, crowded spaces with many people; third, close contact. He assures that "80% of those infected do not necessarily pass on the infection as long as they are not in an environment with the 3C’s".

According to the medical epidemiologist, their main goal is "to try to maintain a healthcare service, including hospital beds and intensive care units available" for 10-15% of those infected who need hospitalisation, while 80% often "get better without any symptoms".

"My opinion is that we are in a second wave of infection right now", Dr Jindai says. "We have seen more imported cases. It is likely that they returned to Japan from abroad at the beginning and middle of March... Also, in addition to such imported cases, we have seen more cases without obvious epidemiological links".

He opines that the newly-declared state of emergency is likely to bear fruit in about two weeks. "I hope in two weeks we see a reduction of the cases because of everything we've been doing over the last few weeks", the epidemiologist notes.

According to risk management expert Katsuyuki Kamei, Abe's decision to declare a state of emergency wasn't the result of long-term planning: "the government was pushed by the people to take drastic measures against the coronavirus", he observes.

At the same time, the Japanese government is trying to prevent the country's economy from plunging further into recession. Apparently therefore, major Japanese companies won't stop their activity although museums, theatres, cinemas, parks, schools, and universities will be closed, he notes.

And here is the rub, according to the professor: even during the state of emergency the country's trains will be very crowded with people heading to their workplaces. "So, we see some contradictions in this declaration", Kamei observes.

At the same time, the government has introduced measures to support people who lose their job or have their income minimised. On Monday, Abe introduced a 108 trillion yen ($989 billion) relief package, which will include direct money transfers to families and small business owners who lose their incomes because of the COVID-19 outbreak.

Kamei explains that the cash handouts will be conducted on an applicatory basis: "We have to apply ourselves and this is another problem", the professor says admitting that "the country's crisis management against the coronavirus has entered a new phase".