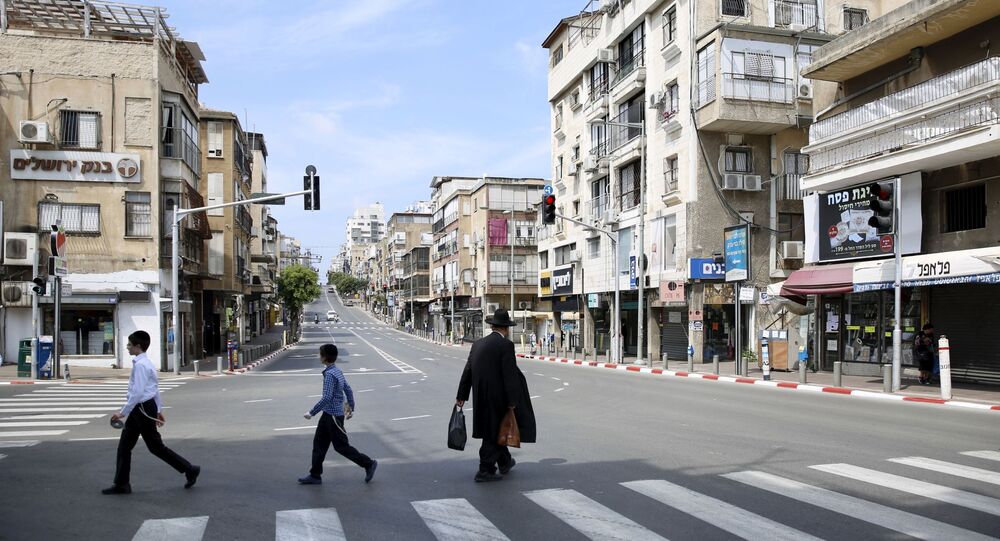 Israeli Prime Minister Benjamin Netanyahu has imposed new measures in an attempt to curb the spread of COVID-19 in the country. The virus has already claimed the lives of 57 Israelis and nearly 9,000 others are still being treated in hospitals across the nation.

Addressing the nation on Monday evening, the PM imposed a full lockdown on the country starting from Tuesday evening and up until early morning on Friday, saying the police will make sure to enforce the regulations.

"The pandemic is still raging in New York. President Trump has already warned US citizens that the worst part is still to come. In Europe, countries hit by the coronavirus managed to slightly reduce the amount of deaths. It makes us optimistic but the general picture is still very gloomy. There are still hundreds of funerals taking place in Europe on a daily basis, people are fighting the disease", said the premier.

Nothing to Worry about?

But for Yoram Lass, former director general of Israel's Health Ministry, Netanyahu's remarks are no more than scare tactics.

"Some 1,200 Israelis die on a yearly basis because of pneumonia. Another 1,200 lose their lives due to a chronic lung disease. An additional 2,000 people die because of infectious diseases. The amount of deaths from COVID-19 pales in comparison to these numbers".

So far, the pandemic has claimed the lives of 57 Israelis with nearly 9,000 others still being treated in hospitals across the country.

Official data backs up his claims. In 2016, for example, more than 2,500 people died because of infectious diseases in Israel, while pneumonia and other lung illnesses took the lives of more than 2,300 people.

That's exactly why Lass thinks the magnitude of the disease has been blown out of proportion. "Despite the sorrow that death entails, the numbers are not that scary. The Black Plague killed a third of Italians. If the coronavirus was of the same magnitude, millions around the world would have been dead by now. This is not happening".

The professor believes there are two factors that have contributed to the current frenzy over the pandemic.

"COVID-19 is just a diseases with great PR. The eruption of the swine flu in 2009 didn't grab such headlines simply because tools like Facebook were still in their infancy. Now, photos floating around on social media cause hysteria and make governments act, very often, against any common logic".

But there was another reason too - politics. "Before the eruption of the virus, Netanyahu was a dead body. The eruption of COVID-19 played into his hands", said the professor, suggesting that the PM had used the pandemic to postpone his trial for a series of graft probes that include buying positive coverage and receiving gifts from a rich donor.

It was for these reasons, says Lass, that Israel's government started imposing a series of measures in mid-March. Those included the shutting down of all education institutions, public and governmental offices as well as big and small businesses, unless they were able to prove they were essential to the general public.

A week ago, the Israeli government also limited the amount of employees in each workplace to up to 20 percent of the total workforce, sending many on an unpaid leave and increasing the country's unemployment rate to more than 25 percent, the highest since the establishment of the state of Israel in 1948.

The cities and neighbourhoods, believed to be the hub of the pandemic in Israel, have also been sealed off, adding to the dissatisfaction of the general public.

Lass is just one of those frustrated with the policy. On Sunday, together with other leading experts in medicine and economics, Lass sent a letter to Netanyahu and the country's Health Minister Yaakov Litzman, who has been diagnosed with COVID-19 himself, urging them to stop the unnecessary measures "strangling Israel's economy".

"From the information we possess, it seems that Israel will not be facing the same magnitude of the pandemic that has been observed in Italy or Spain", the letter reads, adding that Israel should ease the restrictions and make a u-turn on its previous decision to impose lockdowns on entire towns.

Instead, the signatories believe, the country should increase the amount of tests carried out each day to spot those infected and isolate only those who really need it, especially the elderly.

The only catch is that testing Israel's nine million people will be extremely tricky. Despite Netanyahu's promises to reach the target of conducting 30,000 tests a day, Israel is only carrying out some 8,000 tests daily and the number doesn't promise to grow.

"What stops the virus is the fact that the people develop antibodies to the disease. Many already carry the virus without even realising that. Gradually, most will become immune to it and its spread will be stopped. Governmental actions have nothing to do with it, it's fake news", Lass summed up.