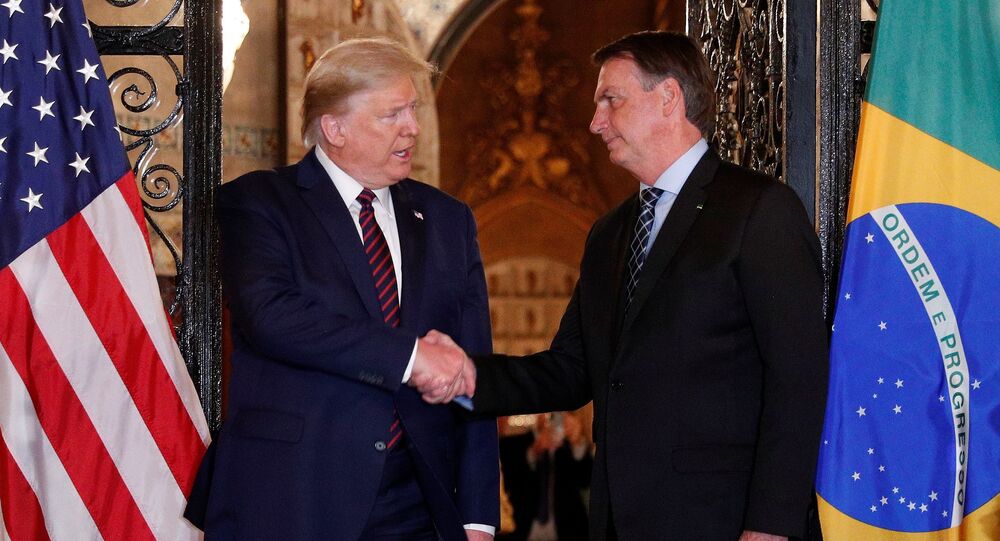 Since issuing a threat to impose steel and aluminium tariffs on Brazil last year, Donald Trump has not ruled out travel restrictions against the country which has found itself in the midst of the coronavirus crisis. Brazilian academic Ricardo Balistiero has explained why Trump is giving no quarter to Brazil despite Jair Bolsonaro's loyalty.

The increasing spread of COVID-19 cases in Brazil has prompted the Trump administration to consider imposing a travel ban on the country.

"Yes, we are absolutely hunting at a ban", Donald Trump said during a 31 March press conference. "Brazil had no problem right up until just a quick time ago. And now they are starting to get inflamed".

As of 5 April, Brazil's health minister reported 11,130 confirmed cases as well as 486 deaths. Until recently President Jair Bolsonaro has opposed the imposition of tough quarantine measures denouncing concerns over the coronavirus outbreak as "hysteria". Likewise, he made no comments with regard to the potential US travel ban following Trump's announcement.

US & Brazil: Anything But Equal Partners

If the US imposes travel restrictions on Brazil, the Latin American country will face further challenges in tackling the consequences of the coronavirus crisis, says Ricardo Balistiero, a lecturer at the Mauá Institute of Technology (MIT).

"Not the United States as a country, but [Donald] Trump, as the leader of the country, is one of a few [Jair] Bolsonaro allies in the world", Balistiero underscores, adding that "no matter what the US does, we [Brazil] accept everything".

At the same time, Brasilia has strained relations with a number of important geopolitical players, according to the academic. He refers to Bolsonaro's row with Germany and France over climate issues, and recollects that recently the president's son, Eduardo, has made offensive remarks about China's role in the coronavirus outbreak triggering a spat with Beijing. Balistiero opines that Bolsonaro's handling of the coronavirus crisis in the country has inflicted further damage to his international image.

While the Trump-Bolsonaro alignment has prompted some media outlets to suggest that the Brazilian is "emulating" Donald Trump and even go so far as to call him the "Trump of the Tropics", the relationship between the countries is not based on equality, the academic notes.

The White House puts US interests first: during a March meeting with Bolsonaro at the Mar-a-Lago resort in Florida, Trump refused to rule out the possibility of imposing steel and aluminium tariffs on the South American nation. Earlier, in December of 2019, Donald Trump announced that he would slap metal levies on Brazil but then backpedalled on the measure.

"Our position is weak, until today we have made many concessions and have not received anything tangible in return", says the Brazilian academic. "What we have received is the threat of introducing duties on steel, and now the threat of cancelling flights".

According to Balistiero, Brazil should defend its interests, especially in times of crisis.

"We need a little bit more pride so we can put forward our demands in the situations as one that is unfolding today as the eighth world economy and have weight in the negotiations if some decision is made unilaterally", he emphasises.