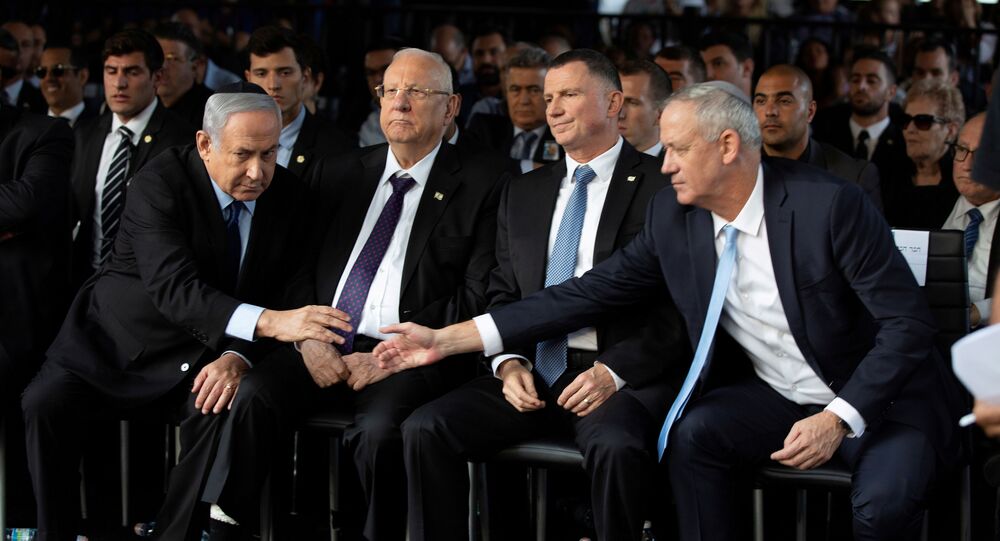 Benny & Bibi: How the Israeli 'Deep State' Got Hit Below the Belt and What New Gov't Will Look Like

A coalition agreement between Likud and Kahol Lavan is expected to be signed any day now. Israeli observers have explained Benny Gantz's sudden decision to team up with Benjamin Netanyahu and whether a government will be formed at long last.

In a dramatic twist of fate, Benny Gantz, who repeatedly vowed to never join a government headed by the indicted Israeli prime minister, agreed to form a unity government with Benjamin Netanyahu last Thursday. The choice came at a price for Gantz as he broke with nearly half of his party while his coalition collapsed. One might wonder as to why the former chief of General Staff made this U-turn.

Israeli author, publicist and blogger Yuri Moor, explains that one should bear in mind that during the last three election campaigns the Israeli "post-Zionist media" were unanimously backing Gantz in order to unseat the incumbent prime minister, Benjamin Netanyahu.

"After the 2 March elections, this goal was within their reach. But then powerful external forces intervened: novel coronavirus got in the way of the great political wheeler-dealers and ruined their game", Moor remarks, adding that under the new circumstances the post-Zionist media has largely lost its veneer of omnipotence.

According to the publicist, Gantz realised that in the next election the Israeli people's choice would be less dependent on the media and it would not be in his favour: in time of crisis people would elect Netanyahu, a more experienced politician.

"It is also possible that Gantz sees that it would be much harder to rule the country under the new conditions, and given the he has neither ministerial nor parliamentary experience, he decided to learn from Netanyahu for a year and a half", the author suggests.

Nelly Gutina, an Israeli author and political commentator agrees that the coronavirus pandemic was one of the reasons why Gantz decided to team up with Netanyahu.

"He comprehended that changing horses in midstream is fraught with risks", she presumes. "There is too much responsibility in the event of a likely failure. The press started leaking that Gantz would like to wait seven months and consolidate his power in the Knesset instead of becoming prime minister during the epidemic".

The second reason, according to Gutina, is that the Kahol Lavan leader could have realised that his political allies are using him as "a tool against Bibi" while trying to oust the prime minister no matter what.

Avigdor Eskin, an Israeli political analyst, deems that the major reasons behind Gantz's change of heart originated from deep-seated problems within the Kahol Lavan-led coalition.

Second, "there were severe internal problems inside the Kachol Lavan party, which is a conglomerate of three different political movements; Benjamin Gantz has felt at certain point, that he will be better off with Netanyahu than with Yair Lapid and Avraham Ayalon", the political analyst emphasises.

Lieberman is the Biggest Loser

Benny Gantz's sudden political maneouvre has seemingly caught his ally, Yisrael Beiteinu's Avigdor Lieberman, off guard. Ahead of the March elections Lieberman predicted that the Kahol Lavan-led coalition would have "61 seats without Netanyahu", adding that a "unity government" was no longer on the table.

"This is a knockdown for Lieberman", says Eskin. "He is left outside with no real influence. This will be an electoral blow for him in the future".

Nelly Gutina agrees with Eskin: according to her, the leader of Yisrael Beiteinu has become used to his status of a "king maker" as he garnered maximum political benefits when each of the two blocs needed a coalition mate to outweigh the opponents.

"This approach allowed Lieberman, who gained only five mandates, to assume the position of a minister of defense without having sufficient qualification", she says. "Today, many analysts predict that his political career is over if Ganz and Bibi reach a compromise".

If a Netanyahu-Gantz government is created, Lieberman’s faction will turn into backbenchers with minimal impact on what is happening, suggests Yuri Moor.

"Lieberman, in my opinion, always knew that this would happen", he says. "I got the impression that his task had nothing to do with forming of any coalition, or pushing any agenda or program, and not even influence in the future government. His only task was to prevent Netanyahu from forming a coalition and thereby force him to step down. He recently let it slip that he was offended by Netanyahu".

© REUTERS / AMIR COHEN
A man wears a face mask as he walks in a market in Ashkelon while Israel tightened a national stay-at-home policy following the spread of coronavirus disease (COVID-19) in Ashkelon, Israel March 20, 2020

The Netanyahu-Gantz Gov't is Coming

After three snap votes in a row, the question that is on everyone's minds is whether this time Israeli lawmakers will finally form the country's government. According to Moor, this time an alliance between Netanyahu and Gantz is likely to be a strong one, despite simmering contradictions. The truth of the matter is that neither side is interested in torpedoing the deal amid the unfolding crisis, he believes.

"If the coalition is disbanded on Netanyahu's initiative, Ganz would automatically become a head of the transitional government for the election period", the publicist explains. Therefore, Netanyahu is not interested in taking such a step. It does not make sense for Gantz to destroy the coalition either: after a year and a half, he will receive his prize in the form of a prime minister’s chair".

Gutina shares a similar stance: "Once Gantz made his decision, there's no turning back, because the Kahol Lavan bloc has already collapsed and cannot be reassembled".

"From the point of view of those who created this politico-technological project for the purpose of ousting Bibi… Gantz failed to meet their expectations", she says. "However, now, Gantz and his party fellows can continue their political life under the wing of Netanyahu".

According to Gutina, the Israeli "deep state" got a hit below the belt as neither Lieberman nor Gantz managed to knock Netanyahu off his stride.

"We will see Netanyahu and Gantz hustling now for a certain period of time", foresees Avigdor Eskin. "Netanyahu is stronger in these negotiations. The certain outcome will be a new government. It is coming".

In general, it does not really matter whether the new government will be formed by Passover or after the holidays, adds Moor: "Despite the Israeli media is throwing temper tantrums about the lack of a permanent government, the current temporary one perfectly copes with the ongoing critical situation while the Knesset accomplishes its tasks by allocating all the necessary funds to combat the pandemic and help those who have lost their income", the Israeli publicist concludes.