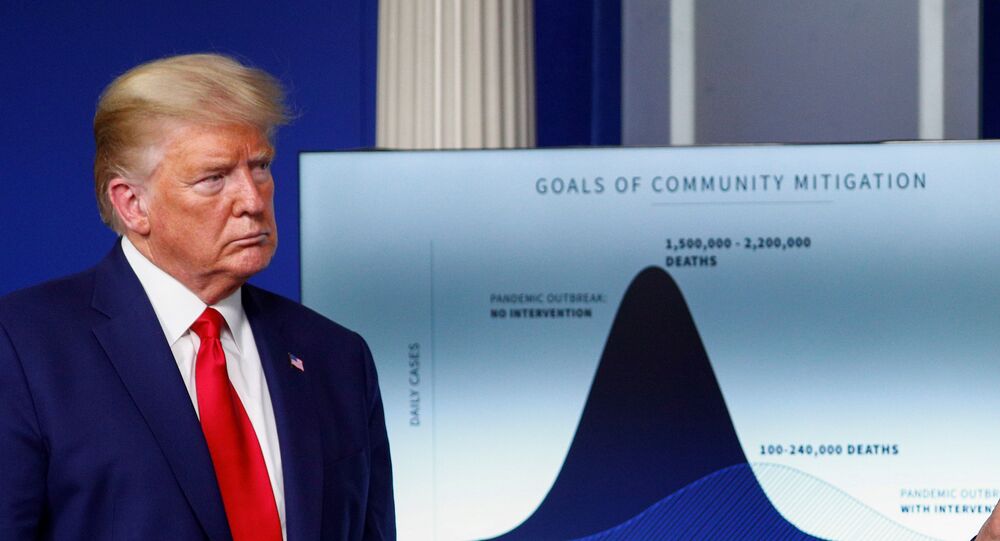 Despite the Trump administration’s failure to address the COVID-19 novel coronavirus pandemic before it had time to fester and spread throughout the US, US President Donald Trump’s approval ratings have remained remarkably high as he continues to offer up conjecture and other baseless claims amid the country’s crisis, one journalist told Sputnik.

Nathan Phillips, freelance writer and editor with bipartisan civic organization Better Angels, joined Radio Sputnik’s “Political Misfits” on Tuesday to discuss both the president’s and country’s responses to the pandemic.

Phillips reminded hosts Bob Schlehuber and Jamarl Thomas that those who are in so-called middle-America and red America - referring to those aligned with the GOP - have much more limited interactions with, and time for, the federal government than those in the media.

“They’re not seeing every single gaffe Trump makes and every single contradictory statement coming out of the White House and seeing the contradictions with the [Centers for Disease Control and Prevention (CDC)],” he pointed out. “They’re just seeing the big, national moment.”

Due to the fact that few actually watch Trump’s entire news conferences, those predisposed to liking him will view outlets partial to him, the journalist noted. The issue then becomes that those individuals are shown just the few “charismatic” moments of the US president’s Coronavirus Task Force briefings.

Phillips said that there is a lot of “psychological tribalism” among Trump supporters during this time. However, it’s not necessarily a trait that is unique to those who back 45.

“There’s like this weird balance in American politics where the populist wing of either the right or the left will feel like there’s a big conspiracy on the other side to keep them out of politics, but then as soon as they get a president into the White House, they start feeling, ‘Oh, well we have to be civil and respect the government now,’” he highlighted.

As far as the pushback against Trump’s policies, Phillips explained that Democratic Governors Gavin Newsom of California and New York’s Andrew Cuomo have been exhibiting leadership and have had news conferences go viral during this time when people are without direction.

At the same time, he noted, Democratic presidential candidate Senator Bernie Sanders (I-VT) has been putting in much more work than frontrunner and former Vice President Joe Biden during the pandemic.

“Joe Biden has been very absent throughout this. Bernie Sanders has been doing a much better job of expressing solidarity with people through this kind of stuff,” Phillips said.

When it comes to Trump, he explained, we have seen how he performs and know his leadership playbook.

“Our faith as a country through this stage in the crisis is really going to depend on the professionals who surround Trump, like [Dr. Anthony Fauci, the director of the National Institute of Allergy and Infectious Diseases], but more importantly on the work of tens of thousands, and millions of people just responding to this as Americans,” Phillips said.