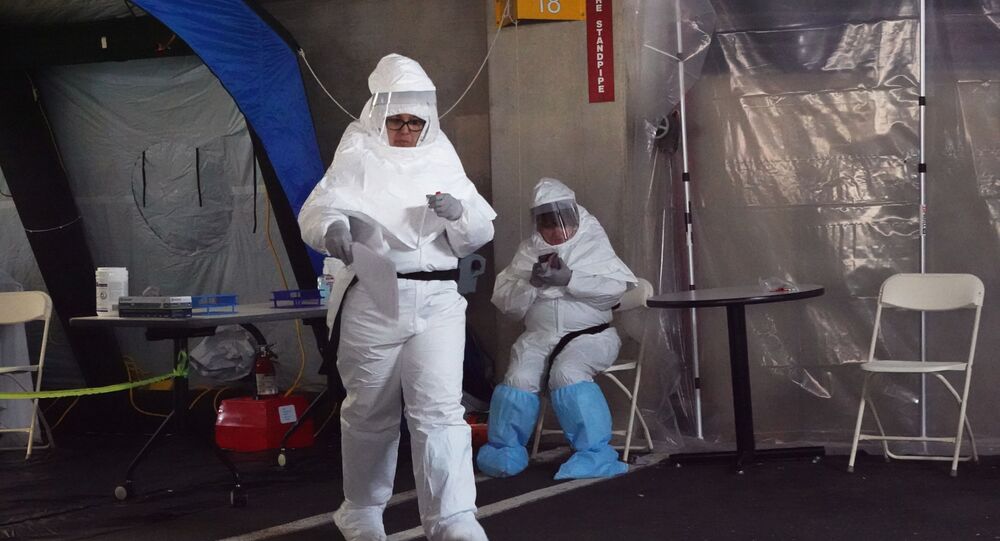 ‘Our Politicians Left Us Behind’: US Bailed Out Big Business’ Future, Not Workers’ - Union Leader

The hardships faced by US construction workers, especially in times of crisis such as the current COVID-19 pandemic, are often overlooked, Jimmy Williams, general vice president at large for organizing with the Painters and Allied Traders International Union, told Radio Sputnik's Loud & Clear on Monday.

On March 27, US President Donald Trump signed an unprecedented $2.2 trillion economic stimulus bill, which will not only send checks to many US families, but also give banks tools to increase their lending capacities during the coronavirus pandemic.

This, combined with the Federal Reserve’s pledge to buy up huge numbers of stocks and bonds, totals some $6 trillion in government spending on the crisis, Trump’s economic adviser, Larry Kudlow, claimed last week.

However, according to a breakdown by the Visual Capitalist, only 30% of the $2 trillion package will go to individuals and families; he remaining 70% will go toward big businesses, small businesses, state and local governments and public services.

“Most of our employees get their health insurance through their work, and we are staring down the barrel of a real big problem looming - just in this week - of countless millions of American workers that are going to lose their health care coverage, both union and unorganized that get their coverage through their employer. That’s going to be a huge problem. We were fighting for that, and we didn’t get it, and our politicians left us behind on that piece,” Williams explained.

“They’ve also been talking about creating jobs in this country through infrastructure spending, and they had the opportunity to do so with this package as well. To be a real, true, worker-driven stimulus package, it should include how we are going to put a plan, safely, to put workers back to work [after the pandemic] or [to] work during this crisis,” Williams continued.

In the bill’s signing statement, Trump said that he would not comply with the provision requiring a Special Inspector General for Pandemic Recovery (SIGPR) within the Treasury Department who would audit how $500 billion in loans for large businesses are distributed. In addition, around $58 billion of that money will go toward commercial and cargo airlines, as well as airline contractors. Furthermore, around $17 billion has been allocated to the vague goal of “maintaining national security.”

“Our systems aren’t set up to deal with it the right way here. We sadly have way too much corporate influence in our politics, we have way too much corporate influence in our government, and this is the fight that the American workforce needs to unite around, regardless of party. We’ve been telling our folks, like, this time around, this is too critical. As a union, we’re not going to play party politics at all, ever again. We’ve been left behind by both parties - the Democrats and the Republicans - and our system is set up almost 100% to support the interest of big business and throw little crumbs down the road and keep the American worker misinformed on what’s really happening,” Williams explained.

“There's no doubt that in this last package, certain things that could have made its way to the American workforce were denied, yet we still had half a trillion put aside for big business and big banks. That’s unacceptable, especially in a time of crisis. We have that history as a country - that was the reaction to our 2008 and 2009 recession, and at that point in time, workers were not even considered a part of any of the stimulus and bailout packages. And we’ve had that history now for at least 50 or 60 years as our government and as our capitalist system, and now is the time for workers to really realize that this whole system doesn’t really work out for their benefit,” Williams added.