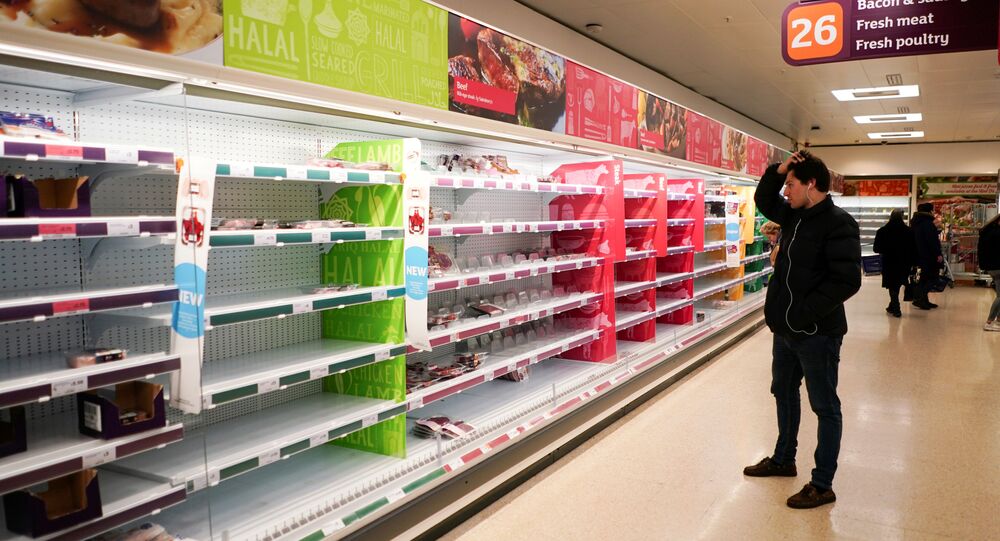 If Lockdown in UK Stretches to Six Months, Some Companies Simply Won't Survive That - Prof

UK Deputy Chief Medical Officer Jenny Harries said on Sunday that it could take the United Kingdom about six months to see whether it can relax the partial coronavirus lockdown.

Iain Begg, professor at the European Institute of the London School of Economics and Political Science, believes that the current situation is unprecedented and the British economy, like every other economy affected by COVID-19, is facing an uncertain future.

Sputnik: What's your assessment of the current state of the British economy?

Iain Begg: We know there's going to be a sharp recession in the current quarter, we know that certain sectors are particularly severely hit, such as aviation or tourism, and some leisure activities, but nobody can predict at this stage how deep the recession will be and how long it will last. If the health crisis abates quickly, then it should be just a short sharp shock and we'd expect to see a rapid recovery. People have been talking about a V-shape recession when you fall very steeply and you rise very steeply afterwards. However, if it proves to be the case that the recession lasts longer than expected, then there's great uncertainty about how deep it will be and how damaging it will be to the sectors most badly affected. This is true not just for the British economy, but for every economy affected by the virus.

Sputnik: To what extent is it ready for such a shock?

Iain Begg: It's unprecedented. It is unlike a financial crisis, where everybody at least knows how to deal with it, which is to pump money into the system and to recapitalise the banks. It's not like a war crisis, because a war crisis tends to increase the economy, if only for a production of armaments. In this case what has been done is the deliberate lockdown of the economy to prevent the health crisis worsening. And this is an unknown territory for any policymaker. It's a bit like having a very extended general strike, when damage can be done without knowing how long it's going to take to end.

Sputnik: What measures can the government take to provide support to the sectors hardest hit in this scenario?

Iain Begg: The government, I think, has done appropriate things, as have many other governments. They've put together a significant fiscal stimulus package. With a combination of grants, which are going to be paid to companies worst affected and loans to enable those risking financial difficulty, to borrow very cheaply and on favourable terms, to try to ride out the storm. In addition, the Bank of England, as is the case with other central banks, has agreed to pump more money into the system to provide liquidity. The government can borrow from the Bank of England and this, in every respect, is an old-fashion policy response, which is printing money.

The problem with printing money is that traditionally it's been associated with high rates of inflation. However, we are such a long way from what happened in Zimbabwe, where excessive printing of money led to hyper-inflation, that it's a perfectly rational response at the moment. The other thing governments have been doing, and the British government is also one of those to do it, is to provide direct income support for workers. It's important to recognise that those who are laid off from a short-term working because of the crisis need income support. The combination of support for employees and now for the self-employed that has been announced by the chancellor echoes what's been done in other countries and it's, again, a very rational response.

Sputnik: What could the short-term and long-term consequences of a six-month lockdown of the UK economy be?

Iain Begg: If it stretches to six months, it becomes much more damaging, because there are companies which simply cannot survive that. They are using up their working capital at present. Those with heavy working capital requirements and the need for continued revenue to keep them going, such as airlines, are going to be in desperate difficulty. And it's likely that those sort of companies will need additional support if it lasts as long as six months. If they start to go, then they are not easily going to be able to recover. There's an expression used by economists in relation to the labour market known as hysteresis. This is a phenomenon that means that if you are detached from a labour market for a certain period, you lose your skills and you lose your commitment to work. I think we may need to invent a new term of hysteresis for companies who are unable to trade because they will lose markets, they will lose their competitiveness, and this is what is much more damaging in the longer term.

Another worry from all of this is that when a recovery does happen, the public sector will have incurred huge new debts. The debt-to-GDP rate will have gone up, both because debt will have been increased and because GDP will have gone down. And it will take a long time to recover from this. We are familiar with this from war times: typically in a war, the debt-to-GDP ratio rises very sharply and then the country has to work hard to deal with the consequences. If there is a rapid recovery, it would be a relatively minor problem. If it endures for months or even quarters, then it becomes more of a problem and implies new austerity measures in future.