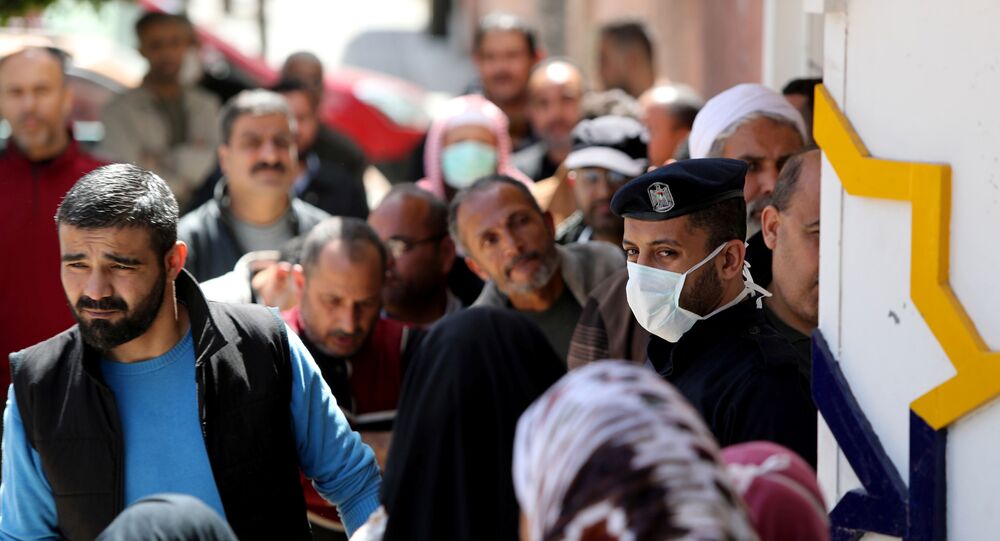 The outbreak of the coronavirus in the Gaza Strip is far from being the only reason behind the calling off of the March of Return protests, believes a Gaza-based expert. The other reason for the cancellation is that Hamas has managed to restrain Israel, making the latter realise that its aggression towards the Palestinians will come at a price.

Monday was supposed to be a day when tens of thousands of Palestinians took to the fence separating the Gaza Strip from Israel to mark the second anniversary of the Great March of Return protests.

The weekly demonstrations that kicked off in 2018 called on Israel to solve the Palestinian refugee problem and end Israel's blockade of Gaza. Protesters also vented anger at the US administration for its decision to recognise Jerusalem as Israel's capital and move its embassy to the disputed city.

But following the outbreak of the deadly coronavirus which has seen at least nine people infected in the enclave alone, Hamas, an Islamic group that controls the Strip, decided to call off the mass demonstrations, fearing crowds of people would create a fertile ground for the spread of the disease.

As a result, Gazans will now need to look for other means to mark the occasion. Reports suggest that apart from setting up a press conference, Hamas is also planning to stop traffic for an hour and encourage Gazans to burn Israeli flags and raise Palestinian ones on their rooftops, instead of arranging a mass rally.

For Adnan Abu Amer, the head of the Political Science Department at the University of the Ummah in Gaza, the new form of protest is an opportunity to attract Israel and the world's attention to the suffering of the Palestinian people.

"Gazans have been living under Israel's blockade for 13 years now. Ever since it was imposed, we have only witnessed a deterioration in all aspects of our daily lives and this is something Palestinians would want to address", he explained.

Israel introduced restrictions on movement in Gaza back in the 1990s with the creation of the Palestinian Authority but limitations intensified in 2007, immediately after Hamas, considered a terrorist organisation by Israel, seized control over the Strip, ousting the more moderate Fatah government that had governed the enclave.

Since then, the economic situation in the enclave has started to sour causing an acute problem of unemployment (slightly more than 46 percent as of 2019), high prices on basic necessities such as food and water and extreme poverty that reached 75 percent in 2019, according to Palestinian officials.

Although Abu Amer realises that the protesters' original demand of solving the Palestinian refugee problem was not realistic, he did think that the protests managed to "raise the international community's awareness" about the situation in Gaza.

More importantly he believes that the protests created leverage for Hamas. "The Islamic group uses these protests to annoy Israel. It shows Tel Aviv that it can no longer do what it wants and that its aggression towards the Palestinians will come at a price".

However, for the time being, those who have been paying the price are the Gazans themselves.

Between 2018 and 2019 when the protests were still fresh and violent Israel's security forces killed more than 260 Palestinian protesters. Some 30,000 others were wounded.

As demonstrations dragged on, becoming a weekly reality for Gazans, with Hamas refusing to compensate those who took part in the rallies, dissatisfaction started to mount leading to a drop in motivation.

The result was that the amount of protesters shrunk, going from tens of thousands participating in the protests in the first months of the mass rallies to less than two thousand last December, prompting Hamas to postpone demonstrations until March.

But Abu Amer explains the drop in numbers by the "unwritten agreements" reached between Israel and Hamas with the help of Egyptian, Qatari, and mediators.

"Hamas made sure to convey to Israel that protests will decrease if Tel Aviv eases restrictions on Gaza, and that strategy seems to prove itself".

In February, Israel increased Gaza's fishing zone and gave permits to 7,000 Gazan residents who enter Israel for work, mainly in agriculture and construction.

Additionally, Israel okayed the transfer of the monthly Qatari donations - $30 million used to finance Hamas officials and keep the impoverished population afloat - cash that has been halted several times in the past due to the escalation of tensions between Israel and the Islamic group.

And now, says Abu Amer, this cooperation will only become stronger. "In light of the coronavirus, authorities in Israel and the PA realised that they have no other choice but to put differences aside and start cooperating, albeit indirectly, in an attempt to contain the spread".

This means that protests and other forms of Palestinian resistance will need to wait for better times.