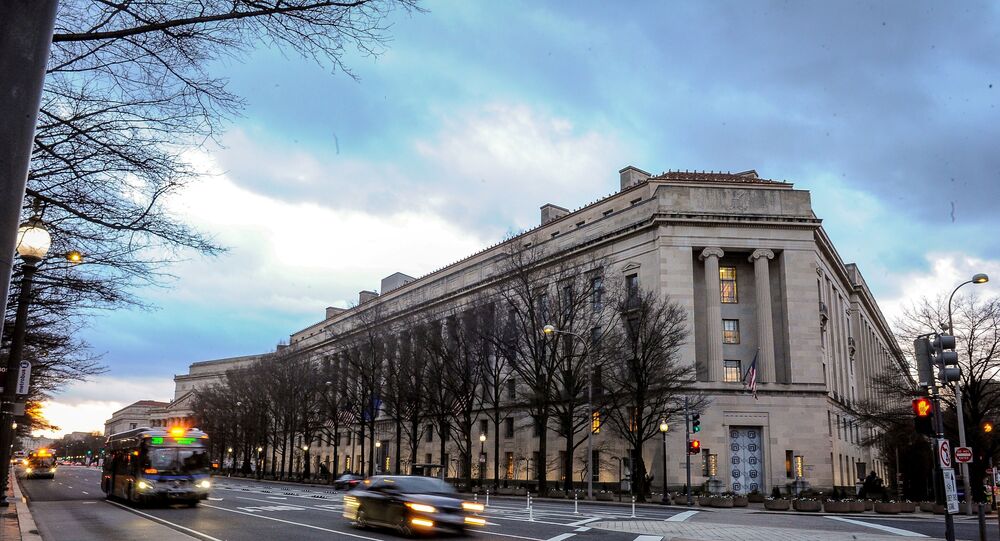 ‘Fits Who They Really Are’: DOJ Seeks Indefinite Crisis Detention Amid COVID-19 Pandemic

The US Department of Justice wants to give some judges the power to detain people indefinitely without trial during emergencies, which is especially worrisome, given that the US is in the midst of a national emergency, Kristine Hendrix, president of Missouri’s University City School Board, told Radio Sputnik’s Political Misfits Monday.

According to a report by Politico, the DoJ proposed that Congress allow the chief judges of district courts to halt court proceedings “whenever the district court is fully or partially closed by virtue of any natural disaster, civil disobedience or other emergency situation.”

The draft legislation also states that the proposal could be applicable to “any statutes or rules of procedure otherwise affecting pre-arrest, post-arrest, pre-trial, trial and post-trial procedures in criminal and juvenile proceedings and all civil process and proceedings,” Politico reported.

The DoJ’s proposal is alarming, given that US President Donald Trump has declared a national emergency over the COVID-19 coronavirus pandemic that has infected more than 43,000 people and killed at least 545 in the country, according to the latest data by World Meters.

“I’m totally not surprised. This isn't anything that the government isn’t already doing. They’re already doing these things and now they’re just codifying it into law to be able to do these practices in the light of the day. It’s super duper scary. I’ve heard even here locally that some people are saying that the unhoused are still being arrested, still being taken in,” the Missouri based Hendrix, who is also a junior Bayard Rustin fellow with the Fellowship for Reconciliation and a contributor to the Truth-Telling Project and the We Stay Woke podcast, told hosts Bob Schlehuber and Jamarl Thomas.

“It’s really sad that the federal government doesn’t care about life, doesn't care about people at the bottom. But this just fits into who they really are. I can’t say that I’m surprised,” she said.

“And I do believe once it's enacted, it will be completely hard to get rid of it, and we’ve already seen that with the War Powers Act and everything that happened after 9/11. Those things were not rolled back, and a lot of that is still going on,” Hendrix added.

According to civil liberties activists, the DoJ’s request could have consequences for habeas corpus, which is the constitutional right of someone under arrest to be brought before a judge or into a court to seek release.

“Not only would it be a violation of that, but it says ‘affecting pre-arrest,’” Norman L. Reimer, executive director of the National Association of Criminal Defense Lawyers, is quoted as telling Politico. “So that means you could be arrested and never brought before a judge until they decide that the emergency or the civil disobedience is over. I find it absolutely terrifying. Especially in a time of emergency, we should be very careful about granting new powers to the government.”

The DoJ is also asking Congress to change the law so that people infected with COVID-19 cannot apply for asylum in the US. The draft legislation requests the same change for people who are “subject to a presidential proclamation suspending and limiting the entry of aliens into the United States,” Politico reported, suggesting that the Trump administration may use the coronavirus crisis to enact controversial policy changes.

Layli Miller-Muro, the CEO of the Tahirih Justice Center, which aims to protect women and girls fleeing violence and persecution, said that the legislation’s language would prevent anyone on a presidential travel ban list from seeking asylum in the US.

“I think it’s a humanitarian tragedy that fails to recognize that vulnerable people from those countries are among the most persecuted and that protecting them is exactly what the [UN] Refugee Convention was designed to do,” Miller-Muro told Politico.