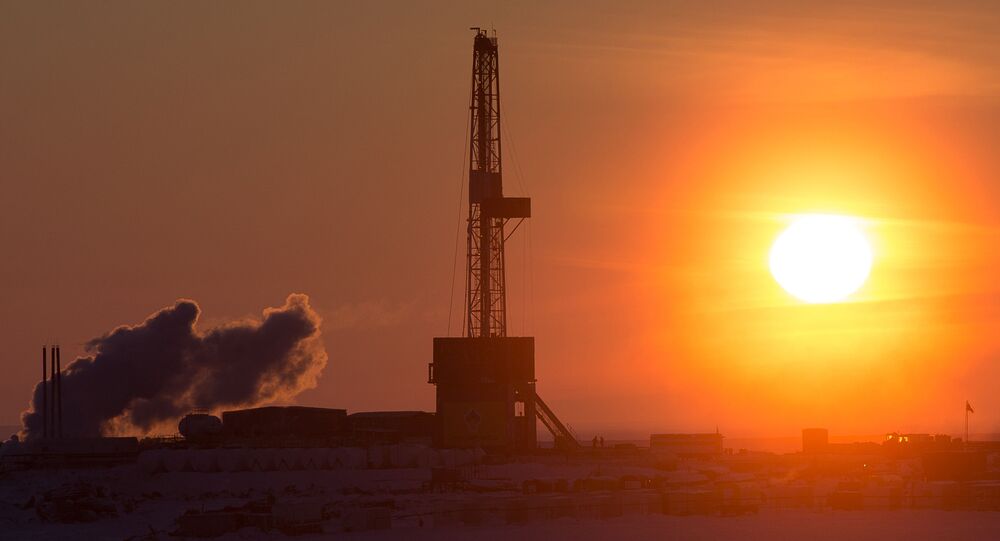 US President Donald Trump used to complain about the high oil prices that came as a result of the OPEC+ agreement, which saw many oil-exporting countries cut crude production. Now, however, is unhappy with the anomalously low price of black gold that is threatening to kill the American shale oil industry.

Commenting on the ongoing oil price free fall, US President Donald Trump accused Russia and Saudi Arabia of initiating a global price war, also claiming that their economies would suffer the most as a result.

What he didn't mention is that the US economy, specifically the shale oil sector, would also be affected as the price for oil has come close to the cost of production for American energy companies. Trump, however, promised that he might get "involved" in the situation on the global oil markets, albeit without going into details. A recent report by The Wall Street Journal, citing anonymous sources, suggested that this "involvement" could include measures to force the biggest producers to cut oil output: sanctions against Russia and diplomatic pressure on Saudi Arabia.

Why the Sudden Interest in the Oil Price Drop?

The US president's interest in changing the situation on the oil markets is due to frustration over another setback on the road to energy independence, Dr Cyril Widdershoven, a veteran global energy market expert and advisor at several international think tanks, believes. As long as the US shale oil industry remains insecure and non-sustainable, Washington is dependent on external crude sources and hence can't fulfil its "long dream of less engagement in global geopolitics", the expert adds.

"In the short term, US shale is not going to die, long-term if all is kept in place, bankruptcies and financial clashes will be part of US shale for sure", Widdershoven said.

Widdershoven points out that Trump just recently sought another change to the oil price - he actually complained about it being too high due to cuts as a result of the OPEC+ deal, blaming - unsurprisingly - Russia and Saudi Arabia the most. The situation has changed since then, not only thanks to these two countries' actions, but also due to the "toxic combination" of the coronavirus' effects on the global economy and the possible resulting recession, the economist notes.

There is another reason for Trump to get "involved" in the global oil price turmoil, Widdershoven points out - he is vying for re-election this year and a significant portion of his supporters are engaged in shale oil and gas production. The expert adds that he can't afford to lose votes due to failing oil companies and temporary economic woes due to the coronavirus.

While reports about Washington's alleged plans to influence global black gold production remain unconfirmed, experts interviewed by Sputnik believe that it would be a poor choice for POTUS if he really wants the market turmoil to end.

© REUTERS / LEAH MILLIS
U.S. President Donald Trump speaks as he meets with representatives of U.S. nurses organizations on coronavirus response in the Cabinet Room of the White House in Washington, U.S., March 18, 2020

Instead, Trump should facilitate a dialogue between the key contributors to the excessive supply of crude that is pushing the prices down, including Russia and Saudi Arabia, Bjarne Schieldrop, the chief commodities analyst at SEB and a leading Nordic financial services group, thinks.

"If Donald Trump really wants to intervene here he should invite all oil producers: OPEC, Russia, Equinor, Exxon, Eni, BP, Shell, Shale oil... to a meeting and to ask them to cooperate on production cuts. In this way all would share in on cuts, all would avoid too much pain from surplus and low prices", he said.

Widdershoven, on the contrary, advises POTUS against intervening in the Russia-Saudi-UAE negotiations on oil that he is confident are secretly ongoing. The energy sector expert explains that a blockade of OPEC-Russian crude would only drive the prices further down.

The analyst adds that the US doesn't actually have the "instruments" to put heavy pressure on the Russian-OPEC tandem and that Moscow and Riyadh will not bow to Washington, if nothing else simply to show that they are not susceptible to it. Widdershoven concludes that the quickest way for Trump to end the oil price turmoil is to actually avoid meddling in the matter.

"Further unrest in oil and gas globally is NOT going to help Trump. The current short-term optimism in [the] US stock exchange and prices could be a fata morgana, as long as Putin and [Mohammad bin Salman] are not willing to talk to each other openly", he said.