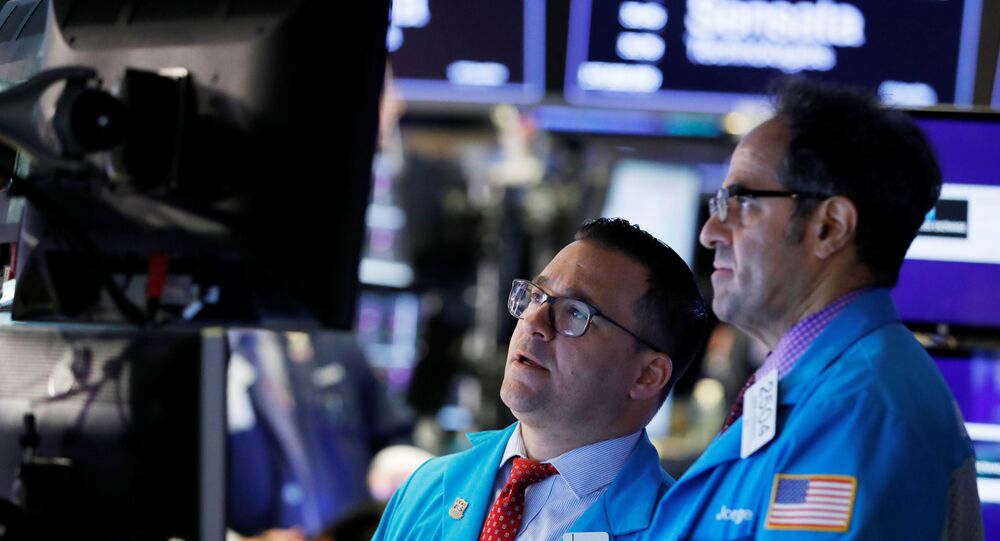 ‘Behind the Curve’: Washington Must Act More Decisively to Avoid Recession - Economist

Dr. Jack Rasmus, a professor of economics at Saint Mary's College of California, joined Radio Sputnik’s Loud & Clear Friday to discuss how the Trump administration needs to enact more drastic economic stimulus measures to prevent the coronavirus from pushing the US into a recession.

In his piece titled “A Tale of Three Crises: Comparing 1929 with 2008 and 2020,” published Thursday on the Global Research website, Rasmus notes that he predicted a coming crisis as far back as September 2018.

“It is important to understand how the now-three great economic crises of the last century are in many ways similar, marked by a joint collapse of financial markets and the real economy, the one determining the other, and vice versa, in a downward general spiral,” Rasmus writes in the article.

“All the signs have been here. We had - at that time, September 2018 - a bubble in the stock market, and it was being fueled by even more corporate tax cuts, trillions of dollars that were forthcoming, just being implemented at that particular time. And the real economy, I kept saying, was getting weaker and weaker. And both the financial side and the real side were weaker, were fragile - fragile meaning whatever hit it would cause it to collapse pretty quickly,” Rasmus explained to hosts John Kiriakou and Brian Becker on Friday.

“Once it did, whether it started on the financial side or on the real side of the economy, the downturn would escalate really fast, and both sides, the financial and real, would exacerbate each other and cause an even faster acceleration of the contraction,” he said.

“And of course, that’s exactly what the coronavirus has done. The coronavirus is a precipitating cause; it set it all off, and fundamentally, below it, the economy was really weaker than everybody was saying at the time.”

The financial economy refers to elements like interest rates, foreign exchange rates and stock prices, while the real economy is reflected in profit, gross domestic product growth and job creation.

Rasmus told Sputnik the present situation is worse than in 2008.

“In 2008, what we had at the worst time was unemployment of about a million a month for six months in a row, and that was pretty much the way it started in ‘29, ‘30 as well, losing about a million jobs a month or the equivalent of that to an economy that was much smaller … we’re losing now, I’m going to predict, a million-and-a-half this month, and it’s only really begun. There’s going to be massive unemployment here, and we’re seeing on the financial side, collapsing of financial markets just about everywhere.”

“We’re on the cusp of maybe already [being] in it, what they call a credit crunch, credit crisis - that means that businesses can’t get the money they need to keep going, and that generates another round of layoffs,” Rasmus explained.

In the last few weeks, the US Federal Reserve has enacted two emergency interest rate cuts, decreasing rates to near-zero in hopes of countering the effects of the global pandemic on the US economy.

“The Federal Reserve central bank is bailing out the banks even before they fail. They’re giving bankers $4.5 trillion. Now, how much has Congress given … the rest of the workers? Well, they’re talking about a trillion dollars. Well, that’s not small change, but as I’ve been seeing in recent weeks, it’s going to take about $4 to $5 trillion to bail out Main Street as well. So they’re way behind the curve,” Rasmus noted.

“We need $4 trillion. We don’t need loans to small businesses … you better give ‘em grants, because even when this thing is over, they are going to be so disabled that they won’t be able to ramp back up. You better give workers at least three-fourths of their income and free medical care for everybody, insured or uninsured,” Rasmus added, also noting that the government should take over companies and industries, such as the airline industry, which will suffer greatly due to the pandemic.

“I think what the government ought to do is take over some of those companies and industries, like the airline industry, consolidate the worst of them or the poorest performing companies into companies that can survive,” Rasmus told Sputnik.

“Before this thing [coronavirus pandemic] broke, I was predicting we were going to run annual budget deficits of $1.5 trillion a year for the next six, seven years and that the total government debt would be $38 trillion. It’s like $22 trillion now,” Rasmus noted.

Death Toll From Coronavirus in Turkey Rises to 9, Total of 670 Cases Registered

US Army Moves to Virtual Recruitment Amid Coronavirus Pandemic - General