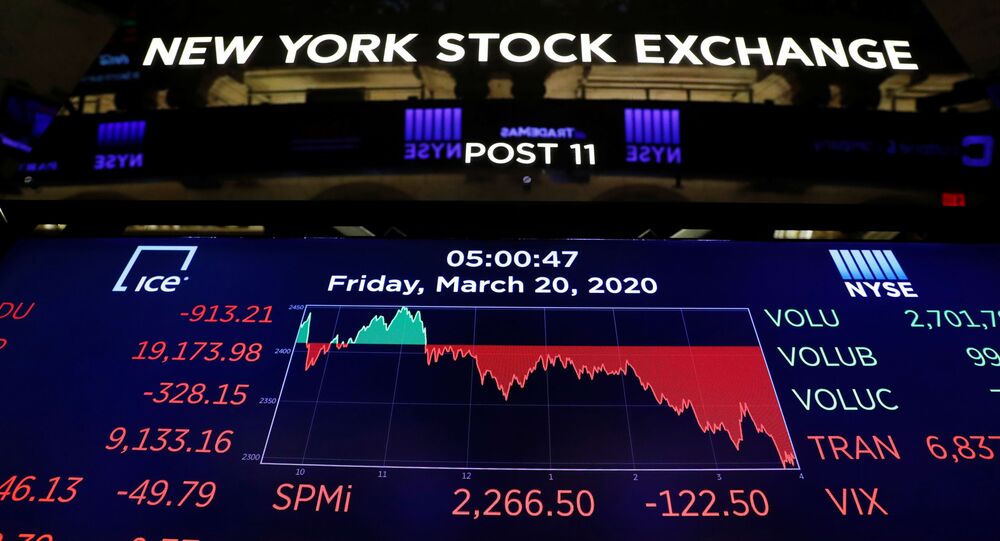 John Ross, a senior fellow of the Chongyang Institute at Renmin University of China, joined Radio Sputnik’s Political Misfits on Friday to discuss the allegations of insider trading and offer expert advice on how the administration of US President Donald Trump can lessen the inevitable death toll from the novel coronavirus in the states.

“It shouldn’t be legal,” Ross told hosts Bob Schlehuber and Jamarl Thomas, referring to the insider trading accusations laid out in a New York Times article on the senators.

If true, the allegations leveled against the lawmakers would constitute clear violations of the 2012 STOCK Act, a bill which prohibits members of Congress and congressional employees from using private information obtained through their position for personal benefit. Burr - who is now under fire for ditching 33 stocks owned by him and his spouse for a sale valued somewhere between $628,000 and $1.72 million - was one of three senators to vote against passing the bill.

“There [are] only two cases in the United States in which there have been massive deaths on US soil: the Civil War and the so-called Spanish flu,” he said. “This is going to be the third. It’s a once-in-a-century event.”

Ross argued that it is likely like up to hundreds of thousands of Americans will die unless the government accelerates its currently sluggish implementation of policies for prevention. As for insider trading, he argued that it’s clear that the lawmakers were looking out for their own pocketbooks.

Just last week, Loeffler - who was sworn into office this year - asserted that “the consumer is strong, the economy is strong, jobs are growing.” Meanwhile, immediately after the January COVID-19 briefing, the Georgia senator sold off stocks valued at approximately $1.275 million to $3.1 million and also bought stock in two other companies, one of which markets teleconferencing software, according to Forbes.

In addition, Loeffler’s husband, Jeffrey Sprecher, is the chairman of the New York Stock Exchange.

“I couldn’t even care about her,” Ross said in response to her remarks. Instead, he’s more concerned about the potential death toll from the novel coronavirus. Judging by Loeffler’s mentions on Twitter, however, netizens are not taking the pressure off the freshman lawmaker. Even Fox News host Ed Henry grilled Loeffler as she attempted to address the allegations.

WATCH: Sen Loeffler winces when Fox News anchor asks about her recent stock purchase in teleconferencing, which is doing quite well now that workers have been displaced. #resignloeffler pic.twitter.com/kTmEV8Q4cq

When asked about reports of insider trading during Friday’s COVID-19 press briefing, Trump did not appear concerned about the issue, but ultimately expressed that his administration may possibly investigate the alleged criminal acts.

“I find them to all be very honorable people. That’s all I know. And they said they did nothing wrong. I find them - the whole group - very honorable people,” he said. While Trump emphasized that he holds all those accused in high regard, he lashed out at a reporter who named only the Republicans accused and did not include Feinstein - despite the fact that he himself only referenced the California senator.

Today, Trump goes with the Fox News angle, saying it was Feinstein and "a couple of others." pic.twitter.com/c7qbCzkcRr

Burr, Feinstein, Inhofe and Loeffler have each issued statements via social media that argue their innocence against the allegations - and netizens have responded with thousands of tweets expressing their skepticism.

Under Senate rules I report my husband's financial transactions. I have no input into his decisions. My husband in January and February sold shares of a cancer therapy company. This company is unrelated to any work on the coronavirus and the sale was unrelated to the situation.

Ross said that in order for the US to recover from the novel coronavirus pandemic, the government needs to take cues from countries such as China and value human life over the economy when it comes to implementing policies and taking steps to avoid new cases of the contagious disease.

“In order to have a mass shutdown - which is what was done in China - you’ve got to be able to supply people at home with food, money and so on. And that’s simply not being done in the United States,” he explained. If these necessities are not provided, people have no choice but to go out and risk getting infected. Considering the lack of testing in the states, some may even be unknowingly spreading the virus.

US Airman Arrested After Officials Find 17 Weapons, Bomb-Making Instructions at Base Home