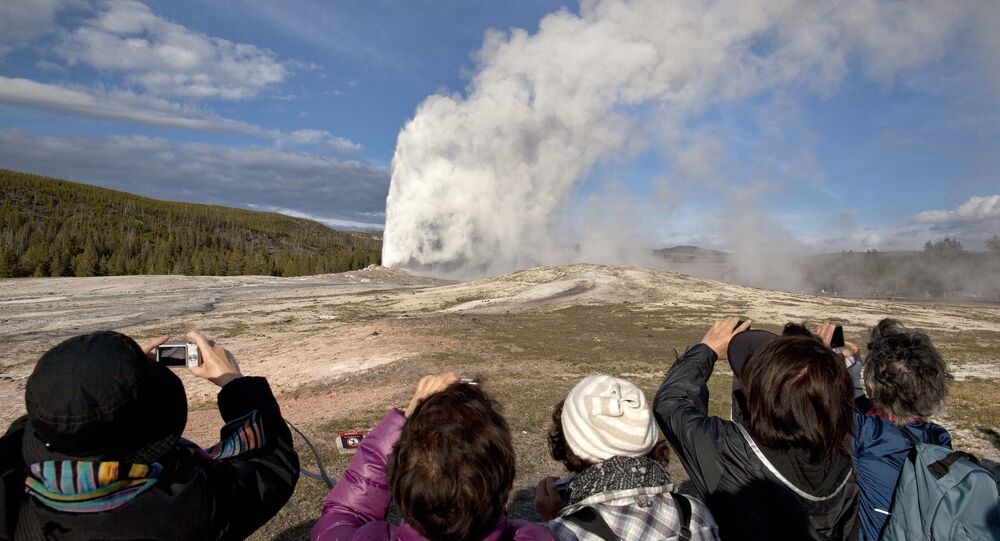 While Yellowstone’s supervolcano has the potential to “shake the world” when it erupts, recent studies suggest the threat of the “long overdue” event has subsided for now, a naturalist told Sputnik on Tuesday.

The Yellowstone Caldera will undoubtedly erupt in the future and cause extreme consequences, Guy McPherson, professor emeritus of natural resources, ecology and evolutionary biology at the University of Arizona, told Radio Sputnik’s Political Misfits Tuesday. But for now, things seem to be quieting down.

According to the United States Geological Survey, a supervolcano “implies a volcanic center that has had an eruption of magnitude 8 on the Volcanic Explosivity Index, meaning that at one point in time it erupted more than 1,000 cubic kilometers of material.” The Yellowstone Caldera has had three major eruptions in history, which occurred 2.1 million years ago, 1.3 million years ago and 664,000 years ago.

“I don’t think we have anything to worry about. I mean, people are going to worry regardless … the Yellowstone Caldera is long overdue for a massive eruption. But, that said, based on the evidence we have seen so far - and particularly based on a paper in the peer-reviewed journal Journal of Geological Research-Solid Earth that came out this January, so just a couple of months ago - it seems that the magma beneath the caldera has subsided or at the very least slowed its pushing up of the caldera from below. So, it looks like it’s paused for now. The observation that the magma was intruding up into the caldera starting in 2013 to 2014 and then again in 2016, that was kind of a big deal, and it was a rapid rate of change, but it looks like the caldera has settled down for now,” McPherson told host Jamarl Thomas.

According to the study, an area of the supervolcano started rising at an unusually high rate in 2013. The rate of uplift was eventually attributed to magma intrusion below the Norris Geyser Basin area at Yellowstone. When magma, the molten rock beneath the Earth’s surface, rises, it pushes the rock above it upwards.

“Yes. It [the Yellowstone Caldera] has gone off before, and it will undoubtedly go off again, and the consequences will be extreme. I remember reading an article many years ago about the first person who identified the boundary of the caldera. So he was looking at maps and wandering around on the ground, and he couldn’t quite figure out where the caldera was, and finally he took a big satellite view that showed an enormous area, and his response was: ‘Well, I had no idea it was that big!’ So, what he was looking for was a typical, sort of medium-sized Pintatubo-style volcano, and what he found was the caldera includes the entirety of Yellowstone Park and then some.”

“It turned out to be an enormous caldera that has the potential to literally shake the world and cover us with ash,” McPherson explained. “Even Pinatubo, when it went off, was a big deal, but it’s nothing compared to what we are facing with the Yellowstone Caldera.”

Mount Pinatubo in the Philippines last erupted on June 15, 1991, in the second-largest terrestrial eruption of the 20th century following the 1912 eruption of Novarupta in Alaska.

“As with any of these large scale events, we are talking about geological time scales. So, the fact that it has gone off at a certain periodicity in the past, we can use that as an indicator as to how soon it might be expected to go off. We’re in the midst of abrupt, irreversible climate change, and that to me represents a much greater threat than the Yellowstone Caldera. Could it go off at any time? Sure. Would it have enormous consequences? Yes, absolutely,” McPherson explained.