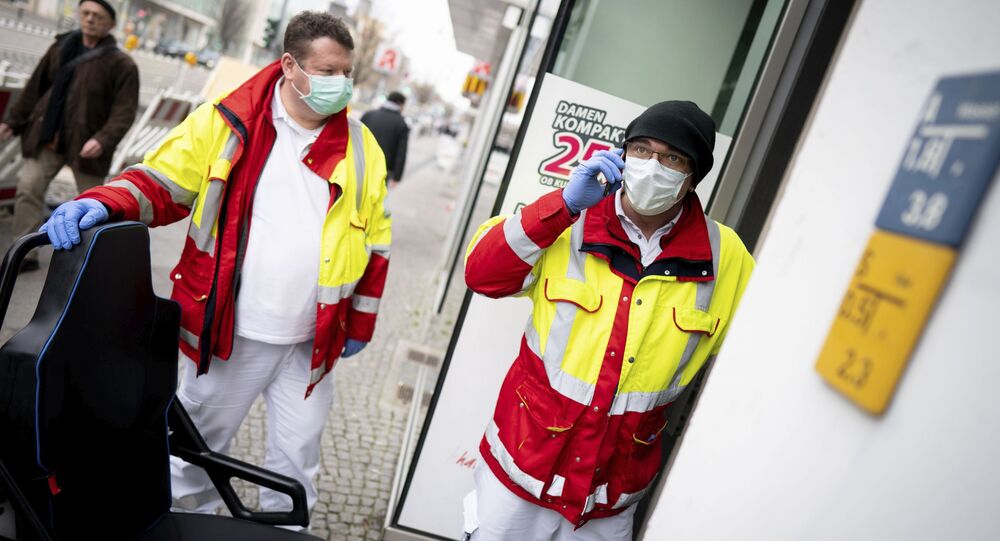 Aspiration to Obtain Herd Immunity From Covid-19 'Is Nonsense' – Professor

The British government has released new advice aiming to combat the spread of the coronavirus. With Prime Minister Boris Johnson urging the public to avoid unnecessary social contact and travel during a televised speech yesterday evening.

Institutions such as schools and universities have however not been ordered to shut, despite many workers having been urged to self-isolate if possible.

But should the UK be approaching the situation differently?

Gerry Fitzgerald, Emeritus Professor of Public Health, at the Queensland University of Technology, gives his views on the matter.

Sputnik: Will social distancing and other measures be effective in preventing the further spread of Covid-19?

Gerry Fitzgerald: I think most countries, and certainly Australia, are still working on the premise that we can identify the cases, isolate them and contain them, and that there isn’t yet substantial human to human contact at a community level.

That’s today; it could change tomorrow or the next day, or the next week and so most of our strategies have really been focused on the combination of personal hygiene and social distancing, and what we are doing in Australia, is that we can identify almost all of the cases, the epidemiology has been identified.

We know that they either acquired it overseas, or they have been in contact with people who have been overseas, there are a small number of cases that they can’t find yet, so what we are able to do in Australia, is that we’ve been able to identify and isolate the people who have got the disease, and then follow up their contacts, and watch them carefully as well.

The isolation, in fact in some of the states we are putting them in hospital regardless of whether they are sick or not so that there can be enforced isolation because we are still dealing with relatively small numbers, but that is going to change significantly if there is a substantial community-based transmission, as there is not only in Italy now, but it’s probably in Spain and France as I read the numbers.

I think that strategy is right, and the other thing is, what do you do with the rest of the community? The reality is, that walking down the middle of any of our cities at the moment, your chance of running into somebody with Covid-19 is actually almost negligible.

When you think of the numbers of people in Australia for example; there are five hundred cases for twenty-five million people, that’s one for every fifty thousand people, so your chance of running into somebody with Covid-19 is very small, considering that we know where they all are, and most of them are in hospital or cured.

Nevertheless; it’s probably wise to try and prevent any substantial community-based outbreak, and so countries are saying “let’s reduce at least the social interaction, increase the social distancing in practical and reasonable ways, without closing down absolutely everything.”

© REUTERS / LUIGI AVANTAGGIATO
Medical workers in protective suits transfer a coronavirus patient from the intensive care unit of the Gemelli Hospital to the Columbus Covid Hospital, which has been assigned as one of the new coronavirus treatment hospitals in Rome, Italy, March 16, 2020

Sputnik: Should governments enforce criminal prosecutions on those who defy rules that aim to contain the spread of Covid-19?

Gerry Fitzgerald: A number of states in Australia have declared it basically a public health emergency, which gives public health officials some powers to effectively detain people, and you will have seen imagery I’m sure from China, where people have been dragged away kicking and screaming, I’m sure that’s an image that we wouldn’t like to see, but the powers are there, I just hope they don’t have to be used.

I’m sure the vast majority of people would be very sensible about this and realise that being isolated is in not only their interest, but their families’ and their friends’, and the community’s broader interests.

I think it’s quite interesting at this stage now, that we are getting a clearer picture of what’s happening in China, and they have used fairly draconian measures to break the epidemic, and it seems to have succeeded, so they are down to very small numbers now, and most of those numbers are from people returning to China from overseas, who’ve probably caught the disease overseas, which seems an incredible paradox doesn’t it?

I think we can take heart from that, that strong measures can control the spread of this disease, and stop it from getting to the extreme levels that we are all a bit worried about.

Sputnik: Can herd immunity really be acquired through exposure to Covid-19?

Gerry FitzGerald: It doesn’t make any sense having an aspiration for herd immunity with Covid-19, on a number of levels. The first thing is, of course, is that the term herd immunity is used in public health around vaccination programmes.

What we aim for example, when we have measles vaccinations or any of those sort of things, or polio, are well over ninety to ninety-five per cent, so that the chance of somebody who happens to get the infection passing it on to a vulnerable person, is very small, so that’s how use it in population health terms.

If we were to theoretically wait for herd immunity in this disease; then there will be a lot of people who are going to die in that process, and other thing about it as well, is that we are not absolutely sure that having acquired this disease, that you would have immunity to it afterwards.

We don’t know for sure yet, we think it might give people immunity, but that’s just really guessing at this stage because the tests haven’t been done, so I would suggest that any concept of using an aspiration to obtain herd immunity is nonsense.