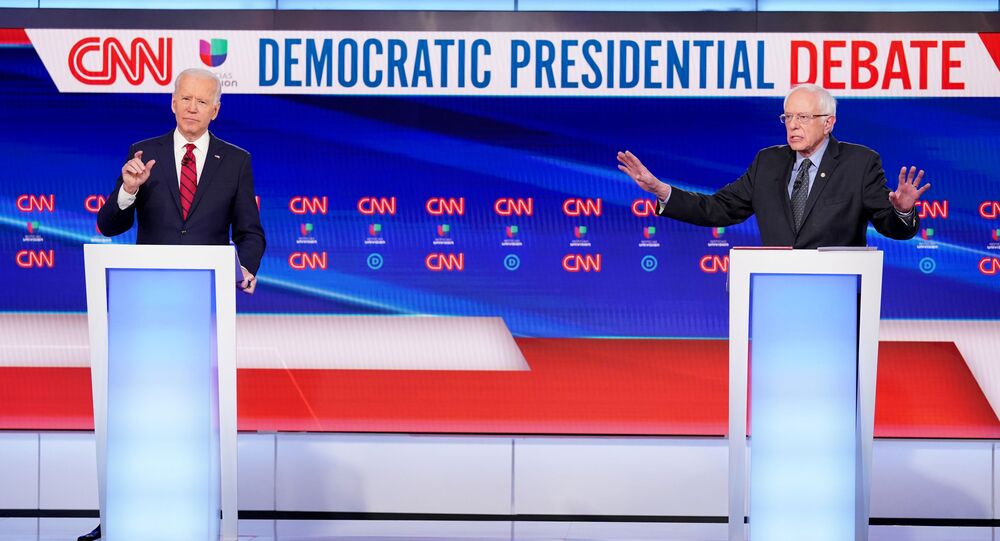 Former US Vice President and Democratic presidential candidate Joe Biden was on the defensive Sunday night during his first head-to-head debate with fellow candidate Senator Bernie Sanders (I-VT). However, despite what the long-awaited face-off revealed about them, it appears the voters have already chosen their nominee.

Dave Lindorff, an investigative reporter, a columnist for CounterPunch and a contributor to The Nation, Extra! and Salon.com, joined Radio Sputnik’s Loud and Clear on Monday to discuss the Sunday debate and which Democratic presidential candidate is likely to secure the party’s nomination.

“All these debates are lame. This one was not much better… You don’t get a chance to correct blatant lies, the deck is stacked by the questioners - who clearly were all Biden advocates - and Bernie, I think he at some times attempted to get his points across, but I don’t think he really hammered home what he needed to do,” Lindorff told hosts Brian Becker and John Kiriakou.

According to the investigative reporter, Sanders’ performance on Sunday night would have been more moving if he had discussed what needs to be done by US President Donald Trump’s administration regarding the COVID-19 novel coronavirus in this current moment, rather than repeating his call for Medicare For All.

Lindorff noted that rather than focusing on the present, both Biden and Sanders talked about what they would do after being elected - which is not necessarily energizing to Americans currently going through a crisis with an unforeseeable end.

One particularly puzzling moment of the night came about when the former vice president falsely claimed that Sanders had the support of nine super PACs (political action committees) after the Vermont senator alleged that a super PAC of Biden’s was running attack ads.

“Nine super PACs? I don’t have any super PACs,” Sanders said with a chuckle - to which Biden replied, “You want me to list them?”

Joe Biden thinks it's funny that his SuperPacs are running dirty, dishonest ads against Bernie Sanders.

“Yeah, you go ahead and list them,” the Vermont senator responded. Seemingly unable to deliver, the former vice president did not name the super PACs, but instead said, “Come on, give me a break.”

Lindorff explained that it appears as if the primary is over at this point, because Biden has gained momentum from the dropouts and subsequent endorsements of former Democratic presidential candidates. Despite the former vice president’s lies concerning his calls to cut Social Security, the latest polls for the upcoming primaries show that Biden is the predicted favorite in terms of the popular vote.

“There’s not going to be any surprises at this point,” Lindorff argued. “He’s too far ahead in the polls.”

Hashtag ‘CancelTrump’ Trends on Twitter Ahead of Key Biden-Sanders Debate