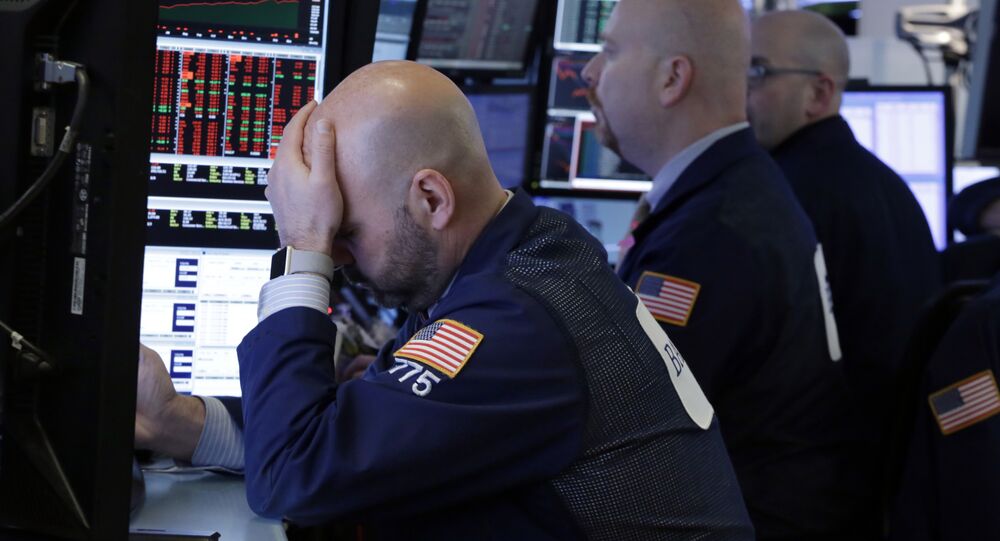 Oil prices for West Texas Intermediate (WTI) and Brent Blend plunged by over 8% on Monday despite a temporary rebound following Donald Trump's Friday vow to fill the US strategic petroleum reserve "right up to the top". Economists have weighed up the potential mid-term impact of the US president's measures on the global energy sector and industry.

As the Dow Jones and oil prices collapsed again on 16 March, White House economic adviser Larry Kudlow announced fiscal measures totaling over $800 billion to support the US economy during the coronavirus outbreak as part of a national emergency plan announced by Donald Trump last Friday. Additionally, the Trump administration is due to purchase nearly 75 million barrels of crude in an attempt to stop the energy market crash.

Jack Allardyce, oil and gas analyst at financial services firm Cantor Fitzgerald Europe, believes that Trump's decision to buy considerable amounts of oil for the SPR still can at least partially fix the situation and "help US shale producers hit by the recent collapse of prices".

"Despite giving no indication on timing, Mr Trump said the plan was to fill the SPR 'right up to the top'", he notes. "It most recently held 635 mmbbls of the capacity of 713.5 mmbbls. While the demand outlook remains uncertain, and supply looks set to increase significantly following the collapse of the OPEC+ production pact, the purchases should provide some underpinning of prices in the coming weeks".

Allardyce says that the bipartisan coronavirus relief package passed by the House early Saturday after hours of talks between Democrats and the Trump administration could "go some way to mitigating the impact should the outbreak continue in the medium term".

Kevin Dowd, a professor of finance and economics at Durham University Business School in the UK, does not sound as optimistic as Allardyce. According to him, Trump's decision "to purchase more oil to increase the country’s strategic reserve" is "a grand sounding cosmetic gesture". He adds that Trump's plan to direct more funds to fight coronavirus "would seem a sensible idea" only if it is spent on "sensible things" like "finding an antidote".

"[There are] two big issues here – coronavirus, and stimulus", Dowd says. "An economic stimulus package was to be expected. These measures often seem to work in the short-term, by boosting confidence, but tend to be counterproductive in the longer term, because they produce ever bloated government and do not address the underlying issues of lack of economic resilience and the failure to implement radical economic restructuring that the US economy needs".

For his part, Yannis Koutsomitis, a political and economic analyst from Belgium, argues that "the [stimulus] package could prove to be enough if it's bundled with a debt refinancing scheme as was hinted by Trump on Saturday".

On 14 March the US president announced that he would like to refinance the US national debt, which currently exceeds $23.3 trillion.

For his part, Laurence Kotlikoff, professor of Economics at Boston University, presumes that the replenishment of oil reserves announced by Trump last Friday is "not a big factor in the world market".

He explains that the "big factor" here is the demand for oil and gas which is projected to drop amid the economic slowdown.

"I don't see the energy sector picking up until this crisis is over", Kotlikoff says. "And I don't see any game plan by any government to actually get this under control in the long term. For eliminating the problem, we don't have a plan".

Meanwhile, Goldman Sachs forecasted that real US GDP growth will be 0% in the first quarter with a contraction of 5% in the second quarter pointing to an upcoming recession in the country.

Kotlikoff deems that the recession prognoses are not unfounded, referring to the possibility of a nationwide quarantine in the US.

"Now, what this means is that millions of small businesses will go under that are in the service industry and the retail industry and large companies will also go under", he says. "And so this is going to cause them a massive recession, maybe a depression in our country. It depends on how long it lasts, but we don't have a game plan for how to fix the problem".

According to the professor, it's only half the story as global recession is already on its way drawing parallels between the ongoing developments and the 2008 global financial crisis.

"It's already beginning. I don't think it's going to wait till July", he notes. "July is many months away. Recessions begin. When people get fired, when large numbers of employees get fired, workers get fired. And if you look at 2008 when Lehman Brothers collapsed, went bankrupt. The firing happened within a couple weeks. And they actually fired about eight hundred thousand by December [2008]. So you can expect to see this happening very, very quickly. I would say the announcements will probably start this week".

He notes that in case the vaccine against the virus is found in two months and everybody gets vaccinated the problem would be solved. However, according to the academic, that would be a 'miracle' scenario, while the reality is likely to be much tougher.

On 13 March, the US president declared a national emergency freeing up to $50 billion in federal resources to tackle the coronavirus spread and ordered the Department of Energy to buy crude for the nation’s SPR.

Following the announcement US stock indexes bounced back with the Dow surging 1,985 points on Friday after having its biggest one-day drop a day earlier. Oil prices rebounded about 5% on the same day making US shale producers more optimistic amid the dramatic slump in crude prices driven by economic slowdown and OPEC plus agreement's collapse.

However, on Sunday, the Federal Reserve dropped interest rates to near zero and announced that it would buy at least $700 billion in Treasuries. In response, investors started dumping US stocks and purchasing bonds. Eventually, all 30 Dow Jones Industrial Average dropped in premarket trading on Monday driven by fears that the Covid-19 pandemic could lead to global recession. According to InvestingCube, it was recession fears that pushed crude prices down again on Monday.