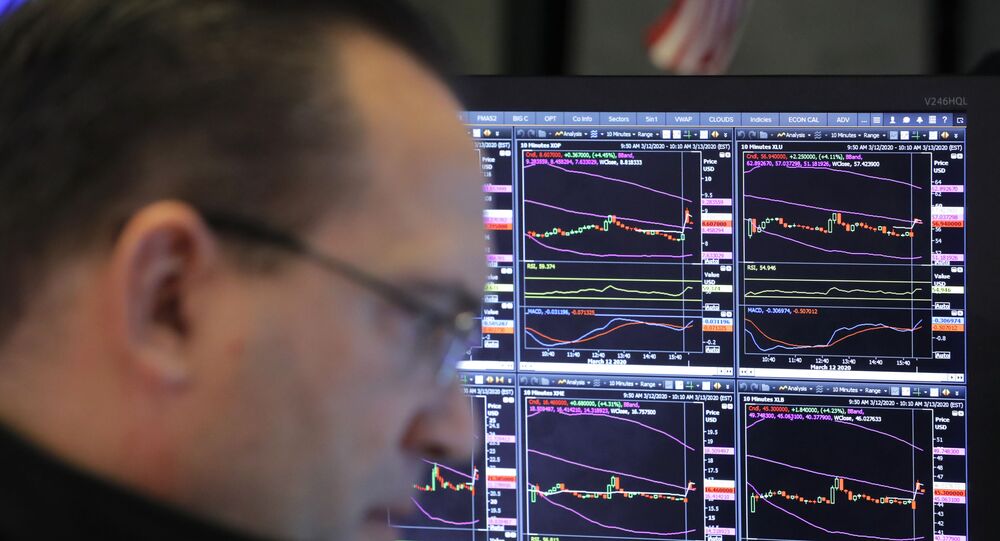 Not Another 2008: Economists Say Coronavirus-Induced Crisis Won't Last Long, But Will Still Hurt

Global economies are currently simultaneously struggling with two sources of pressure – the coronavirus pandemic that has not only crippled the travel industry, but also production in several countries, as well as drastically falling oil prices. However, economists do not believe that the economic slowdown will last long.

Global stock markets suffered a drastic dive on 12 March, a day that has already been dubbed by some as a new "Black Thursday" after the notorious US market crash on 24 October 1929 that preceded the Great Depression. The US Dow Jones Industrial Average lost around 10% on Thursday, despite the American exchange briefly suspending operations after the index lost 7% just minutes after trading started. The S&P 500 and Nasdaq Composite did not fare any better, losing 9.5% each on the same day.

© AFP 2020 / ODD ANDERSEN
A picture taken on March 9, 2020 on the Polish side shows a medical staff taking the temperature of a driver during sanitary checks at Jedrzychowice border crossing, between Poland and Germany, in a measure to protect against the spread of the novel coronavirus.

European stock markets did not perform any better on "Black Thursday" either. The Stoxx 600 index, which measures the value of European companies, lost around 14% on 12 March, suffering record losses against the backdrop of US President Donald Trump closing the United States’ borders to EU citizens amid concerns of the coronavirus spreading and the ongoing epidemic in Italy.

In addition to showing the greatest one-day losses since 1987, economists were taken aback by the most rapid transition of the American market from being bullish to becoming bearish in history. A 20% fall from the last high, which marks such a transition, normally takes from two to three months, while the Dow Jones managed to do so by 11 March in just one month.

The sharp falls on the markets were caused by pressure from "very large" drops in both demand and supply due to the coronavirus outbreak, Panicos Demetriades, a professor of financial economics at the University of Leicester and former governor of the Central Bank of Cyprus, believes. He adds that a major shock is able to disrupt supply chains and paralyse demand.

© REUTERS / BRENDAN MCDERMID
Traders work on the floor of the New York Stock Exchange (NYSE) near the close of trading in New York, U.S., March 12, 2020

However, Demetriades stops short of comparing the coronavirus shock to the global financial crisis (GFC) of 2008, saying that the two events are not alike in their nature, as the GFC was characterised by high levels of public or private debt and failing financial institutions. The economist says that the recovery from the financial crisis was very lengthy, while the recovery from the coronavirus outbreak might actually be quick.

"By contrast the current economic shocks are not expected to be long lasting. Once the virus in under control, we will witness demand rebounding strongly and quickly. As workers return back to work, supply will also re-bounce quickly", Demetriades said.

Another factor that has affected global markets is the major drop in oil prices due to the collapse of the OPEC+ deal that oversaw cuts to crude production among a number of oil-extracting countries. However, this additional shock might actually come as a blessing in disguise for some companies, as Demetriades indicates that it will soften the blow to the airline industry, which is already suffering as a result of the collapsing travel sector.

Despite the major blows to supply and demand, the market crash on Thursday came as a surprise to many. Stuart S. Malawer, a professor of law and international trade at George Mason University's Schar School, thinks that markets reacted irrationally to the recent events, but also noted that they were doing so even prior to the fall.

"For a long time I’ve been bewildered about the rise in stock prices. My view is that the recent market really made little sense. I believe that to some extent the stock market mirrors President Trump’s erratic character. There was no reason why it was so high and now so low", Malawer said.

The markets are currently continuing their sudden and massive swings, but this time upwards. After opening on 13 March, the day after Thursday’s major sell-off, they showed a rise of between 3% and 7%. The S&P 500 and Dow Jones Industrial Average grew by 3% and 3.4% respectively at the start of the trading day, occasionally reaching up to 7% growth compared to the preceding day’s close.

Professor Panicos Demetriades notes that the financial markets are "reacting violently" to recent events and have "unrealistic expectations" from the monetary policies of governments. He points out that monetary policy is poorly suited to help with the supply shocks currently being experienced worldwide due to the many workers falling ill from the coronavirus and the impact it has in regards to limiting the capacities of producers. At the same time, government financial institutions are currently also limited when it comes to their ability to help with demand shocks.

"When it comes to demand shocks, central banks such as the ECB are already over-stretched – their firepower in terms of interest rate cuts is constrained by the zero lower bound and any further cuts can be disruptive to banks and financial markets", the economist said.

There are ways, however, for governments to help their economies, according to Demetriades. He suggests that central banks help some financial institutions with liquidity and readjust the fiscal system to support small and medium-sized businesses that have been affected by the economic shock the most.

Ace Up Their Sleeve: US Media Outlet Says Russian Oil Companies Can Survive Price of $15 Per Barrel