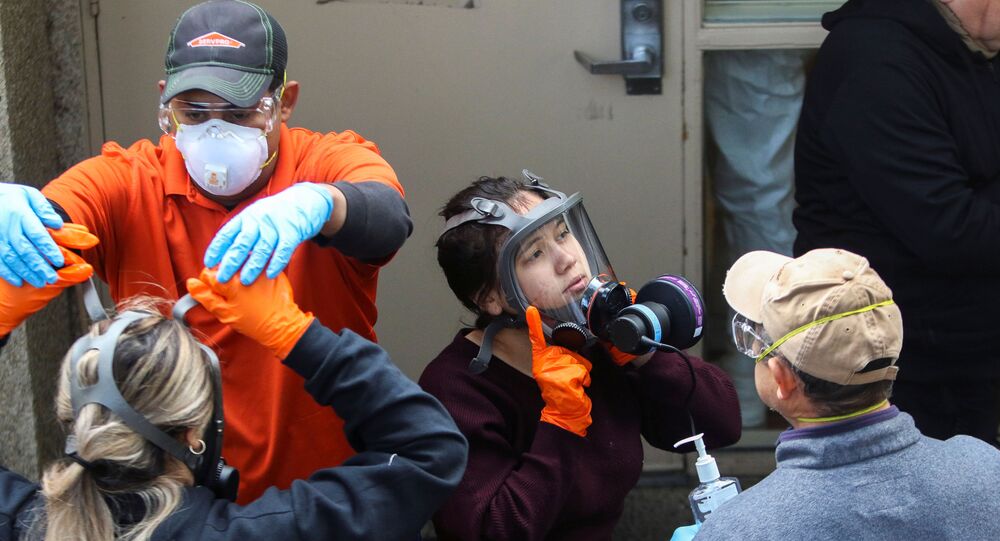 Dr. Saskia Popescu, an infection prevention epidemiologist whose research focuses on the poor utilization of infection prevention and control within the United States, joined Radio Sputnik’s Loud & Clear Wednesday to discuss how the US health care system is currently dealing with the COVID-19 outbreak.

“I think the [US Centers for Disease Control and Prevention] CDC has been really good about providing guidance for the community, for hospitals, for organizations in general. In terms of a larger policy, I think the biggest issue has really just been differences in communication from CDC and NIH [National Institute of Health] versus what the White House is saying. And I think that’s the hard part, because traditionally, we see communications soley coming from public health agencies and not having to go through the White House as a conduit, and I think that’s fuelling some confusion,” Popescu told hosts John Kiriakou and Brian Becker.

Anthony Fauci, the director of the National Institute of Allergy and Infectious Diseases, on Wednesday predicted that the coronavirus outbreak in the US is going to get worse.

“Bottom line: It’s going to get worse. If we don’t do very serious mitigation now, what’s going to happen is we’re going to be weeks behind,” he told the House Oversight and Reform Committee.

However, we can all take a role in helping control or prevent the virus, Popescu pointed out.

“We all have a role in infection prevention, whether that means controlling and preventing and things like social distancing. I always reiterate with people: even if you don’t have cases in your community, social distancing will help prevent cases from occurring, hopefully, and if you do have cases, that will help prevent them from spreading. So, we all have a role in this, and the hard part is that for a lot of people, they don’t stick with basic infection control strategies like hand hygiene and staying home when you’re sick. It’s just that simple in a lot of cases, and because this is such a new situation, people feel like they should be doing something more, something new,” Popescu explained.

According to the CDC, 79 state and local public health labs in 50 states and the District of Columbia are currently conducting coronavirus diagnostic tests. However, CDC Director Robbert Redfield on Tuesday told lawmakers that lack of funding has hindered the federal government’s response to the coronavirus outbreak.

Popescu also warned that healthy people getting tested for the coronavirus could potentially overwhelm the already strained US health care system, as testing was previously delayed due to testing kits that were made in a contaminated Atlanta lab.

“Right now, I always encourage people: if you are not feeling well, call a primary care physician unless you’re starting to have issues breathing or a very high fever. And everybody’s situation is very unique, because we all have our different medical histories,” she said.

“That being said, it’s challenging, because we’re at a very unique time when it comes to testing. And for a lot of health care facilities, we have been primarily going through the state labs, and they are limited, of course, and they have very strict guidance by CDC for the patient under investigation. So, unless you meet that criteria or can make a pretty strong case for going outside of it, that test won’t be accepted, it won’t be given. But now, as commercial labs are beginning to increase their capacity, that is becoming a secondary option for people who wouldn't meet that guidance … and that’s kind of a situation where hospitals are just working to look at the logistics of that,” Popescu explained.

“I think part of it is a mixture of caring for the severely ill, especially if there are a lot of cases, but that is very intensive for hospitals. But also if you continue to have people who are not that sick coming in out of concern and wanting to be tested, that inundates our emergency department. So, I’m hoping as lab capabilities increase, this means people can do that in more outpatient urgent care settings that don’t stress the hospital, because that’s when we start to worry about emergency rooms being able to take in traumas and actual very sick people instead of being overwhelmed and stressed by the ‘worried well,’” Popescu added.

US President Donald Trump last week announced that his administration is considering various policies to alleviate the effects of the coronavirus in the US economy, such as a payroll tax cut, paid sick leave for employees and emergency lending for small businesses, suggesting that the US government may reconsider its guidelines for paid sick leave.

“I think this is a really good time to evaluate general practices when it comes to people working while they are sick. I can’t speak to necessarily the HR policies of every company, but I think this is a good reminder: when we force people to work sick or don’t provide them with the time off to take care of themselves, we are putting everybody at risk, and we really need to evaluate that across all US industries. And it’s realistically a public health issue, and this is just a huge reminder of that,” Popescu explained, also noting that regardless of whether the Trump administration declares a national emergency over the pandemic, the government shouldn’t have to take such a measure.

“Private industry should recognize the role that they have in public health. I hope it doesn’t come to that [institution of a national emergency], but I think now is probably the time that that’s being evaluated,” Popescu explained.

“There’s a trickle effect to it all. So, when we started doing education for our clinical staff, part of that was: what does it look like for social disruption? Start making plans now if schools do close. And I think that’s the hardest part. How do we mitigate that from a health care side when that’s also a reality of the situation and you have parents that are going to have to take care of their kids or find alternative routes for child care, but those have serious implications for responders, whether they are in health care or even public health?” Popescu asked.

According to Popescu, she’s seen varying estimates on the percentage of the US population that may eventually be infected with the virus.

“I’ve seen a lot of varying numbers. I’ve seen anywhere from 30-40%, so I think the challenge in trying to make those estimates is that it’s constantly changing. And I think when we make those kinds of estimates, it's difficult, because it could be 30-40% in one week, and that could change next week. But realistically, in my mind, that doesn’t change how we need to prepare as a society for something like this,” Popescu added.

US Capital Declares State of Emergency Amid Coronavirus Outbreak