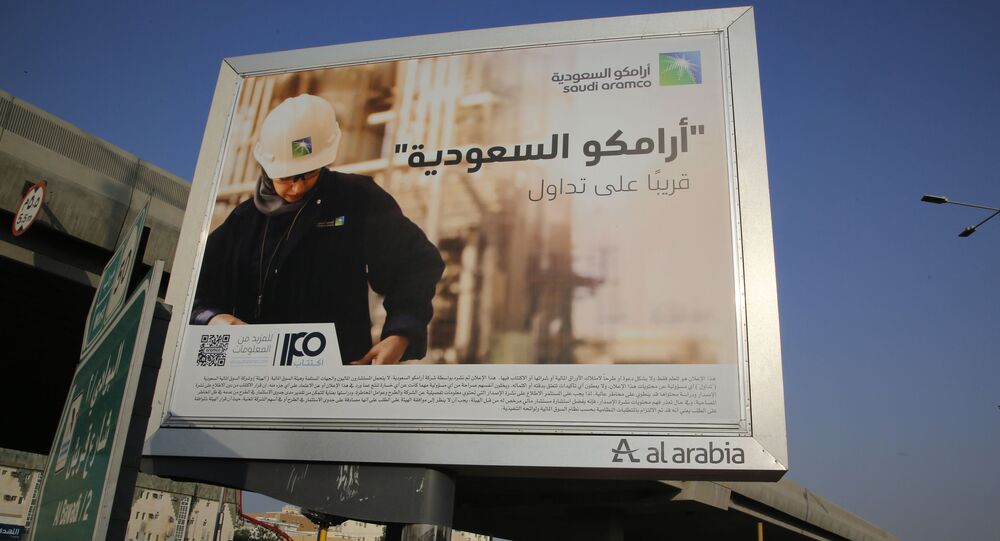 Global markets saw yet another Black Monday on 9 March with major benchmarks touching an all-time low in the biggest price slump since 2008 driven by fears over coronavirus spread and a sharp slide in oil prices. Analysts explain what's behind the slide and how Riyadh's oil pricing strategy may impact the global economy.

The outbreak of the novel virus has caused a slowdown in economic growth and a fall in oil demand.

Crude prices had already plummeted ahead of the Vienna meeting where Saudi Arabia demanded that the OPEC+ countries dramatically cut their oil output by up to 3.6 million barrels through 2020.

The next day Riyadh introduced significant oil discounts for its Asian, European and American customers and vowed to ramp up production to above 10 million barrels per day next month, triggering price frictions within OPEC+ member states.

Riyadh "has punitively deployed its comparative advantage against other oil-producing countries" pursuing two objectives, says Justin Dargin, an energy analyst at the University of Oxford.

First, Saudi Arabia's oil strategy is meant "to bring the other oil producers to the table and enforce an accord"; second, it demonstrates to the world that the slump in crude prices would be economically disastrous for all, he suggests.

What's make the situation even worse "is that it comes against a backdrop of sharply falling oil demand, especially in key consuming countries such as China and elsewhere in Asia" amid the coronavirus epidemic, he notes.

Klaus believes that the slide in oil prices is going to hit Saudi Arabia as Riyadh's budget is "based on a breakeven oil price of roughly $85". He foresees that crude prices are likely to stay below $40 for some time with demand being hammered by the coronavirus outbreak.

"If Saudi Arabia is considering flooding the global market in the aftermath of OPEC+ failure to agree deeper production cuts, it will end up in a similar fiasco to the one in 2014 when it decided in the aftermath of the oil price collapse to flood the global oil market and was forced to reverse its discredited policy having inflicted severe damage on its economy", Salameh says, adding the Saudi economy cannot live too long with an oil price of $30-$40 a barrel.

The economist doubts Riyadh's ability to raise its oil production by 2 million barrels a day (mbd) to 12.0 mbd: "Its claim of having a production capacity of 12.0 mbd has never been tested", the professor says. "Moreover, Saudi oil production is in decline having peaked at 9.65 mbd in 2005".

According to the professor, the largest loser of the oil price collapse is the global economy. However, within the global economy, the US shale oil industry and Saudi Arabia are likely to be hurt the most, he observes.

© REUTERS / Sergei Karpukhin/File Photo
Workers look at a drilling rig at a well pad of the Rosneft-owned Prirazlomnoye oil field outside the West Siberian city of Nefteyugansk, Russia, August 4, 2016

Salameh rules out that it was Moscow that provoked the OPEC+ agreement's collapse. He explained that Russia's decision to refuse any deepening cuts was "logical" since any further cuts in oil production would have proven futile to counter-weight the economic slowdown and would have resulted in further loss of OPEC’s market share.

"The progressive cuts since January 2017 have only provided weaker producers the ability to benefit from the action of the stronger producers without them having to do anything in return for such benefits", he explains. "While Saudi Arabia, because of its lower production costs could still sell oil profitably, it became increasingly difficult for other producers to cut down production streams and still make sufficient profits to meet their financial needs".

Saudi Aramco has the lowest production cost in the world at around $2.80 per barrel.

That said, Brent is likely to fluctuate between $30 and $40 per barrel in the near future, Vijayakar highlights that "such low prices cannot be supportive to the global economy since both producers and consumers should be getting a fair price for the world at large to benefit and prosper".

The analysts suggest that the only way to fix crude prices and stabilise a global economy already affected by coronavirus is to hold a dialogue within the framework of the OPEC+ format.

"The absence of a viable agreement between OPEC+ members will only intensify the already heavy burden on the global economy as it struggles to manage the uncertainties of the global pandemic", warns Justin Dargin.

"Saudi-Russian cooperation has served OPEC well in the past", echoes Dr Mamdouh G Salameh. "That is why the organisation should maintain this cooperation".