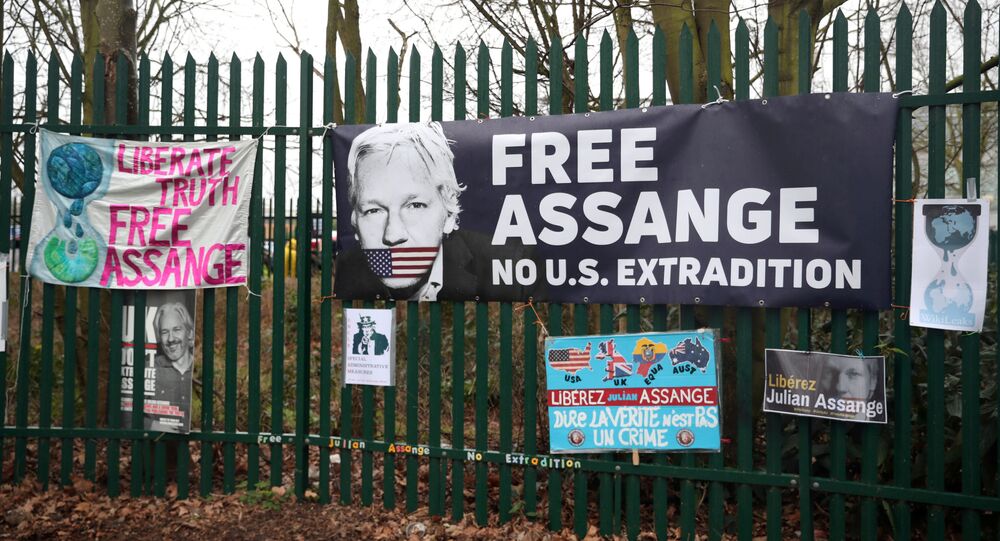 With Julian Assange’s extradition hearing on hiatus until May, details concerning the WikiLeaks co-founder’s treatment while at Belmarsh Prison have continued to reach the public. Though it’s unclear whether Assange’s mistreatment will be addressed, his supporters hope that the next phase will expose the prosecution’s flawed narrative.

Steve Poikonen, host of the Slow News Day podcast and cohost of the Free Assange online vigil series, joined Radio Sputnik’s Loud and Clear on Tuesday to discuss the first phase of the WikiLeaks co-founder’s extradition hearing and what the next step in the court proceedings may bring.

As previously reported, Assange was forced to remain in a glass box, separated from his defense team, when he appeared in court back in February.

He's locked up in a glass box, isolated, as if he was a violent murderer, separated from his Defence Team, put at back of Court room - where he complained he couldn't hear the proceedings or see much

Judge refused to let him out 👿
Defence appeals pic.twitter.com/epgpChNcSd

“It was a show of force by the state to show what happens when a journalist or publisher prints something that is outside of the narrative,” Poikonen told hosts Brian Becker and John Kiriakou, referring to the enclosure as a “human zoo” or “Hannibal Lecter cage.”

“The narrative around Julian Assange for the prosecution and the US State Department is that he is a cyberterrorist - with emphasis on ‘terrorist’ - that leads them to a show of force like this,” he explained. “Let’s not forget that Tommy Robinson was allowed to sit in a UK court with his defense on assault charges, whereas Julian Assange has never harmed a fly.”

The International Bar Association’s Human Rights Institute issued a news release on Tuesday condemning the mistreatment of Assange during his trial. The international organization highlighted that in addition to being disallowed to sit with his attorneys during the trial, the WikiLeaks co-founder “was handcuffed 11 times; stripped naked twice and searched [and had] his case files confiscated after the first day of the hearing,” according to his lawyers.

While most individuals who support Assange would not like to see him extradited to the US, Poikonen pointed out that “there’s a contingent of people here in the United States that believe that Julian Assange needs to be extradited so that he can then expose the people who have been coming after him.”

However, he asserted, those advocating for such a move should “transfer that energy … toward stopping the extradition,” because it’s unlikely that Assange would be provided a fair trial in the Eastern District Court of Virginia.

Despite her refusal to provide the US federal government with additional testimony regarding Assange, whistleblower Chelsea Manning was scheduled to leave jail and appear, once again, before a grand jury on March 10 and March 13.

“This entire case and all of the people [who] are wrapped up in it are being subjected to the complete breakdown of the rule of law, and as the narrative slips further and further out of control, the reaction is going to be more and more over-the-top,” Poikonen argued. “So holding Chelsea back in is just one more show of force. It’s one more way for [the US government and the State Department] to impose arbitrary punishments” and demonstrate that “regardless of what the actual law says, they alone are the arbiters of it and it can change on their whims.”

With the first phase of Assange’s extradition trial having wrapped up one day early, the next portion of the proceedings is not set to take place until May 18 and will continue through the first week of June.

Poikonen concluded by saying that as the trial progresses, “incredible revelations” will be provided by witness testimonies brought forward by the prosecution and defense. “We’ll get to see in real time how a spun narrative gets made and then gets distributed and disseminated, and ultimately gets decided which version of the truth people want to believe.”

Assange’s Hearing is the Most Politicised Trial in Decades - Journalist