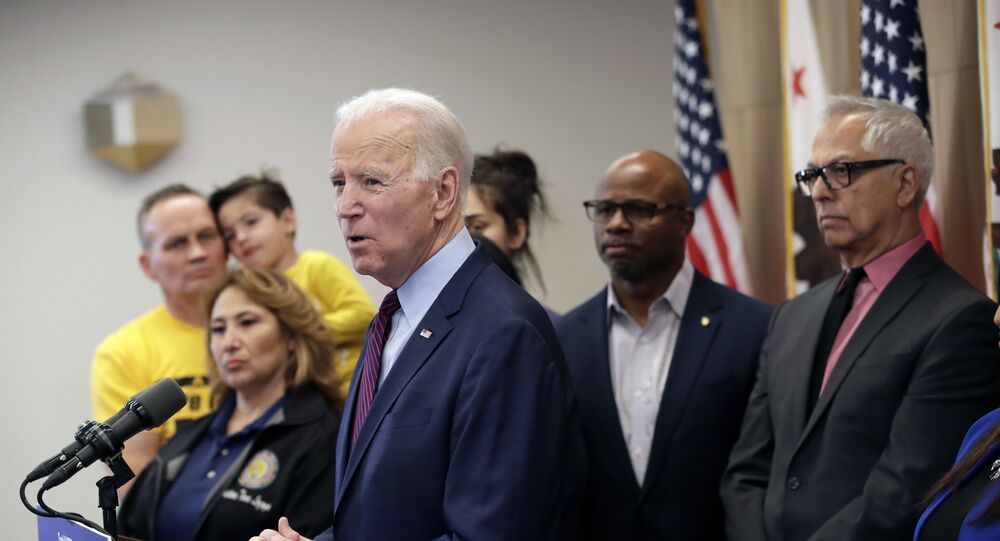 After Super Tuesday all eyes are on ex-Vice President Joe Biden and Vermont Senator Bernie Sanders to see how the two will perform in Michigan with all their rivals except for Hawaii Rep. Tulsi Gabbard having withdrawn from the race. According to US academic Vladimir Golstein, Michigan is nothing short of a Rubicon for Biden and Sanders.

Though polls predict Bernie Sanders will lose in the Great Lakes State, a strikingly similar situation unfolded four years ago when prognoses said the Vermont senator would be outpaced by Hillary Clinton by an average of 30 points. Nothing of that kind happened and Sanders won in a tight contest with the former secretary of state.

New poll of Michigan from the Detroit Free Press shows Biden leading Bernie 65% to 14% among voters age 50 and over, and by 24% overall. But sure, keep begging Elizabeth Warren to swoop in and save the day

​To complicate matters further, the Republicans appears to be determined not to let the Bidens off the hook this time, by pushing ahead with a Senate probe into the former vice president and his son Hunter's dealings with Ukrainian gas company Burisma.

​In a separate move Ukraine's State Investigation Bureau has kicked off two pre-trial criminal inquiries into then-Vice President Joe Biden over allegations that he forced Kiev into firing then Prosecutor General Viktor Shokin in 2016.

Though Joe Biden's nomination appears very likely, it's still too early to jump to conclusion as to who will score victory at the Democratic National Convention this July, says Vladimir Golstein, associate professor at Rhode Island-based Brown University.

Vladimir Golstein: It is still too early to call the winner. It is clear that Biden would carry the Southern States, as well as the States who are relatively prosperous and who don’t want any major disruption. The way Minnesota, Texas, and Massachusetts voted is highly indicative of the process. The same applies to the booming economy of North Carolina. In other words, where we have a clash between ‘progressives’ and ‘prosperous’ – prosperous and status quo candidate prevails.

Furthermore, it is precisely these prosperous and moderate Democrats who are willing to experience another four years of Trump, who does not really threaten them, despite endless complaints, than give a chance to Sanders who might prove a major disrupter. Biden, however, would let the establishment go on with business as usual, and that’s exactly what the moderate Democrats from prosperous states are voting for.

But Midwestern States, the ones that gave victory to Trump in 2016 – are not prosperous. They have plenty of disgruntled population with plenty of progressives added to the mix. Like Michigan, for example. So I would say, that if Biden carries Michigan this coming Tuesday, he’ll be nominee, if not there is a very long and tough race ahead of us.

What should be stressed, however – and I feel very strongly about it – is that only Bernie Sanders has a chance to beat Trump in general election. Biden, on the other hand, has very little chance of doing so. He is not liked outside the moderate Democrat circles, he brings a lot of baggage from the Clinton/Obama era; consequently, he’ll be a major irritant for the people who voted for Trump in 2016.

They would get up and vote against him. Add to this the vocal and energetic Sanders supporters, who would either sit out or vote for Trump in protest of another Bernie’s loss. But it is clear to me that the people who throw their weight and votes behind Biden, are willing to experience four more years of Trump, rather than giving Sanders a chance to win and embark on his relatively moderate, but possibly destabilising policies.

Joe Biden thinks we should "return to normal."

Normal means the rich getting richer while the poor get poorer.

We cannot return to normal. We need real change.

​Sputnik: What's your take on Biden's win in Super Tuesday vote? What's behind his relatively modest performance during the beginning of the 2020 primaries and a sudden March breakthrough?

Vladimir Golstein: There was a clear anxiety in Democratic Party. They surely wanted to beat Trump, but they could not settle on the candidate who, first, can do that and, second, who won’t be too disruptive of the business as usual. So they looked around, trying even former New York City mayor, billionaire Bloomberg, but none of the candidates seem to foot the bill. Biden was there from the beginning but his performance during the debates and during the early primaries, was unimpressive to say the least.

Luckily for him, people in South Carolina have decided to vote on him – mostly for his association with the much admired Barack Obama. Once that happened, the DNC put enough pressure on Biden’s potential rivals (Pete Buttigieg and Amy Klobuchar), to pave the way for his victories on Super Tuesday.

And of course now, with Liz Warren and Mike Bloomberg dropping from the race, it is a two-man competition for the sole of Democratic party: status quo candidate vs. the candidate who intends to rock the boat, at least as far as the domestic politics is concerned.

Sputnik: Ukrainian investigators have launched a probe into the former vice president. In a separate move the Senate Homeland Security and Governmental Affairs Committee announced that it was going to subpoena Andrii Telizhenko in its Hunter Biden-related Burisma investigation. How could these developments affect Joe Biden's campaign in your opinion?

Vladimir Golstein: The pro-Democrat press and its establishment would do their best to ignore, minimise, or spin any bad news coming from Ukraine. So I don’t foresee any news – unless it is the accusation of sexual misconduct – that can damage Biden’s rise to the top of the Democratic ticket. Trump, on the other hand, would surely use it to his advantage – during the general election – if Biden happens to be his rival; which looks very possible right now.