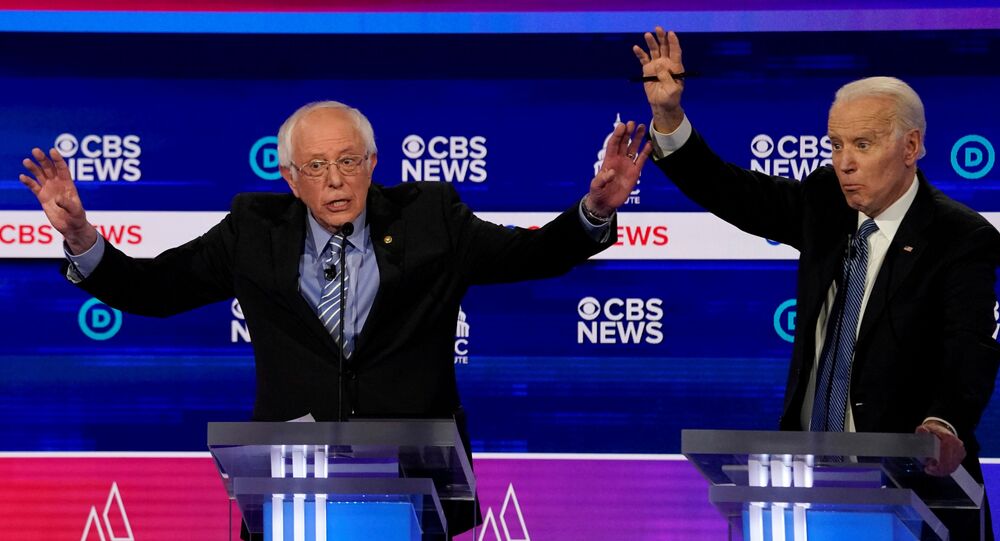 Joe Biden has emerged as the Dem frontrunner ahead of the Tuesday Michigan primary. American academics have explained that the decision of Democratic moderates to drop out of the race is not a coincidence, adding that Bernie Sanders still remains competitive in a number of states.

Joe Biden has outpaced the former favourite of the Democratic primaries, Vermont Senator Bernie Sanders, in the race for the nomination, according to a new CNN poll. Following the Super Tuesday contest over a half of Democrats and Democratic-leaning independents approve of Biden's candidacy while only 36% say they'd rather see Sanders as the party's nominee.

Democratic progressive Warren has so far shied away from throwing her weight behind either of the two frontrunners despite Sanders' appeal to her supporters on Sunday. Warren's surprising cameo on Saturday Night Live has added to the confusion as she joked that she would endorse both the ex-vice president and the Vermont senator. Her witticisms as well as a backstage dance prompted a wave of criticism from progressive Twitter users who lambasted her for not supporting Bernie, whose programme most closely matches hers.

Stephen Morris, a professor at Rice University and a nonresident fellow at the Baker Institute Centre, notes that despite initial numbers Warren proved "unable to capture and mobilise the progressive wing of the party which Sanders was able to gain".

Now with her decision to withdraw along with Democratic moderates, "it is a race between Biden and Sanders", he points out.

"I feel a sense of deja vu from 2016", Morris says. "The party establishment is frightened by Sanders and has mobilised their support behind Biden. Much of that may be strategic thinking: that Biden has a greater likelihood of beating Trump than does Sanders. Much of it may be protecting the party establishment and maintaining the status quo".

Mark P. Jones, a political scientist at Rice University, agrees with Morris that "Biden provides Democrats with the best prospects in defeating Donald Trump" and foresees that Biden, the Democratic establishment's comeback kid, will go "into the convention in Milwaukee in July with an absolute majority".

"That was clearly it all set in motion once Biden was able to show some vitality in South Carolina", the political scientist elaborates. "You saw tremendous pressure on Mayor Pete and Amy Klobuchar, two of the remaining centrist candidates to drop out, they did so before Super Tuesday and endorsed Biden. That allowed Biden to have tremendous success on Super Tuesday and create a gap between himself and Michael Bloomberg, the one remaining centrist candidate that was so large that Bloomberg looked ahead and believed that he had no realistic path to victory".

According to Jones, the withdrawal of the three moderates "completely cleared the way for Biden" and therefore, "with that, Sanders prospects dropped to near zero".

Marvin King, an Ole Miss political science professor, echoes the academics by saying that Biden now appears to be the most likely DNC pick.

"Sanders will continue to do well in Western states, Biden has the advantage in the remaining Southern and mid-Western states, which will yield more delegates", he suggests.

The professor does not rule out the possibility that neither candidate receives a majority of delegates by the time the Convention begins. However, he presumes that Biden, "as a loyal Democrat, will be better able to convert delegates currently pledged to other candidates, to his side, on the second round of voting, if it gets that far".

At the same time, the outcome of Biden's crossing swords with Trump is not clear, since the former vice-president "is prone to errors, and like Hillary Clinton, many people know so much about him", King says. Still, he does not think that Bernie would make a perfect choice as a Trump contender: "Sanders has his appeal but he's never tested his ideas in an election with the general electorate, plus he's from arguably the most liberal state in the Union, so it is hard to see how large his appeal is".

As the Democratic race for nomination has turned into a one-on-one showdown between Sanders and Biden, Michigan is emerging as yet another important milestone for Bernie. Four years ago the Vermont senator scored a surprising victory in the state slowing down Hillary Clinton's march, but now the FiveThirtyEight poll says he seems to be the "underdog" in Michigan.

​Ross Baker, a professor of political science at Rutgers University, deems that Sanders does have some chances in Michigan. However, if Biden wins it "Bernie will have almost nowhere to go".

"[Sanders] has promised that he will support whoever the nominee is", Baker recollects. "If it not him, he will try to convince his followers to vote for Biden".

The professor suggests that once Biden gets nomination Bloomberg may provide his with both financial support and "the on-line expertise of his organisation".

"That may offset the advantage Trump has on social media platforms", he opines.

For his part, Anthony Pahnke, assistant professor of International Relations at San Francisco State University, believes that Biden is not out of the woods yet: "Overall, two thirds of delegates are still to be decided", the academic highlights.

According to Pahnke, it was "clear" that the moderates' "quitting all at the same time was part of some kind of effort to hurt the Sanders campaign". Moreover, they all endorsed Biden, he underscores.

"The truth right now is that Sanders remains competitive in many upcoming states, especially this Tuesday in Michigan, Missouri, and Washington", the professor concludes.