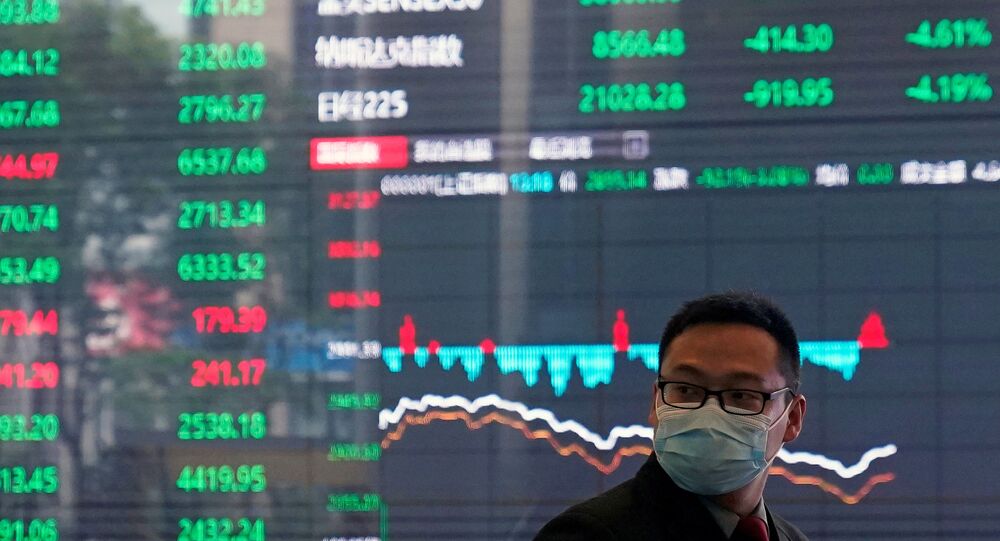 Global stock exchanges have plummeted and gold has risen to new heights; global media sources report that the Chinese virus COVID-19 is the culprit.

Gold market expert Dimitri Speck is among many who argue that COVID-19 is to blame for the current stock market woes, while adding the caveat that there are deeper fundamental problems. Meanwhile, his colleague Martin Siegel disagrees with this assessment, and says that the “global economy will get off lightly”.

The coronavirus “is hitting the German economy at the worst conceivable time because the German economy is already paralysed”, the president of the Berlin-based economic research institute DIW Marcel Fratzscher told the television news channel n-tv on Wednesday. Stock exchanges are slipping and gold is setting price records, the Austrian newspaper Der Standard wrote a few days ago. The ARD channel recently reported that the gold price was heading towards the $1,700 mark, which would put prices at a seven-year high.

The current price of gold per troy ounce is over $1,650 amid a flight to safety from equities. According to the Wirtschaftswoche magazine, “Gold is the lifesaver”:

"In light of the drastic losses on the stock market due to the coronavirus, it is clear how important precious metal is for a portfolio in major emergencies. The virus has caused a 'dramatic collapse in the markets\, said another publisher. The German share index DAX alone “plunged massively at the beginning of the week”.

Sputnik asked two experienced gold market experts whether the spread of the COVID-19 virus had really caused the current spike in gold prices and whether it could really harm the world economy in the long run. Some economists suspect exactly that. After all, the pathogen has primarily hit the new economic power China, which is strategically important as a supplier of many international companies. Specialists warn about possible long-term logistical complications due to the coronavirus outbreak.

“The world economy is in a rather absurd over-indebtedness phase, especially when states and central banks have been at an extremely worrying level for many years,” gold market expert Dimitri Speck stated at the beginning of an interview with Sputnik. He has repeatedly warned before that the debts of states and central banks have been a source of great concern for many years. Now the globally-rampant coronavirus is just another negative factor for the staggering economy of the world.

Will the equity and real estate market bubbles burst now?

“The over-indebtedness is linked to the government loans,” the precious metal expert emphasises. In his opinion, this is the main reason. It not only widens the spread between rich and poor but also fundamentally ensures that the state has the highest credit rating. And thus, the level of debt is constantly being raised.

“My thesis”, says gold expert Speck, “is that everything connected with this – i.e. the bubbles in the financial, equity and real estate markets – will explode in the event of a recession. That's a classic scenario. A recession reduces corporate profits and jeopardises bank balances and tax revenues. And now the coronavirus comes into play. And it looks like it is going to pierce these “bubbles”. Since the economic situation in the world was fragile even without it, and both in Asia and Germany the recession has already begun, the coronavirus has now only accelerated this process”.

“The underlying reason is quite simple: the virus is a bit nasty”, the financial expert states. “Objectively speaking, it hasn't taken many human lives yet.” However, the dangerous thing about the viral disease is the rapid danger of infection and the relatively late onset of symptoms in infected persons. This disease can “only be contained by strict isolation, which is currently clearly visible in some provinces in China”.

The isolation of China's economically important regions “means that the economy only runs at 30 to 50 percent of output. Of course, this is a staggering recession if it lasts for several months. If the virus was to spread en masse to Japan, Korea or Italy, it would have a massive impact on the economic centres there”, the gold market analyst warns.

"In fact, in real economic terms, China is the main supplier (for the global economy – ed. note Sputnik). It plays a crucial role in Asia and the US, a little less in Europe. Nevertheless, this situation is now damaging the economy.” The expert’s conclusion: "A healthy and not over-indebted economy can easily survive a 50 percent drop in production for three months without any problems. But an over-indebted economy will then face even bigger problems. In my opinion, the virus has become just a 'trigger' of a process that started a long time ago.”

“Record gold prices have nothing to do with the coronavirus”

The natural counterpart of “over-indebted currencies” – read: huge debts – has always been the precious metal gold. The fact that the price of gold is currently continuing to rise is not due to the coronavirus, Speck stresses.

“We can already see that the price of gold rising. This movement – first of all, in dollars - is quite independent. It has nothing to do with the coronavirus. In other words, the virus is a small amplifier here but far from being the main reason for the rise in gold prices.” According to the expert, the gold price will “continue to rise” in the medium and long term.

The current high gold prices are caused, first of all, by a “gradual withdrawal of money from depositors” (read: zero or negative rates) and the world economy becoming mired in debt. “This is why there is a transition to the only valuable tool, namely gold.” With certain reservations, the same can be said about silver. In mid-2018, the “collective flight” to gold started again. “This trend will continue. Private investors in Germany have already made relatively large investments in gold. However, there are still portfolio managers and central banks that are only at the beginning of this process.”

The analyst does not see the risk of a gold market collapse due to the coronavirus wave. According to him, it makes sense for current gold and silver investors to keep their precious metal position.

Is global anxiety over the coronavirus just “hype”?

“This wave of disease, with about 80,000 infected people, should not have too great an impact on the global economy,” gold market and financial expert Martin Siegel, the head of Stabilitas Fonds branch in North Rhine-Westphalia, told Sputnik in an interview. "The hype around the coronavirus has become too big,” he says.

“If the hype continues like this, there will surely be repercussions. But previous epidemics like the SARS virus have shown that the Chinese economy is capable of compensating for the losses within a few weeks. The question now is how long the current coronavirus will continue to rage around the world and how long the "hype" about it will last. The media create “dramatic pictures”, publishing photos of victims of coronavirus, which have a negative impact on the psyche of the people and which are “negatively imprinted in their minds”. This of course also triggers reactions – as is now the case in Italy – from authorities, companies and those responsible. It is not quite clear why there is so much noise around this disease right now”.

The expert drew a historical comparison: "Just like mad cow disease, or bovine spongiform encephalopathy (BSE), still exists as a disease today, but no one is talking about it. And since everyone is talking about the coronavirus now, the population is panic mode”.

“Gold does not protect against infection”

Those who are directly ill or affected, like the isolated people in some regions of China, will not run to buy gold now. The question is, who is actually buying gold and for what purpose? To protect themselves from the infection? It makes no sense. To keep money safe? That doesn't make any sense either. So, the fact that gold prices are rising because of this, in his opinion, fundamentally makes no sense. According to the analyst, he "just can't imagine" that the current panic could provoke people to buy more and more gold.

The reason why many people have been so interested in the precious metal for years is, in Siegel's view, consistent with the analysis of gold market expert Speck:

“Why do people buy gold? The answer is simple: the central banks have reached the end of their possibilities with their policies. How do the central banks worldwide intend to react to this crisis that we now have on the international financial markets with the lowest interest rates for bonds and an all-time high for stocks? After all, when the economy plunges into recession, we are talking about new, freshly printed money.” By the way, part of this new money “will also flow back into precious metals”. That is why Siegel believes that the upward trend in gold will remain with us.

When currency rates drop, gold gains, as it has been for thousands of years.

It is this unstable situation in the world economy that is currently driving people to “go more to gold". "Gold has shown over the centuries that it is suitable for this purpose”, Siegel stresses, “and the time to buy gold now is of course rather late. Investors should have thought about this a few years ago”.

But in the end, the following rule remains true: when people lose confidence in fiat currencies, gold usually wins. This rule applies all the more in a recession, into which the global economy is now probably plunging.

Both gold market experts reached this conclusion during their discussion with Sputnik.