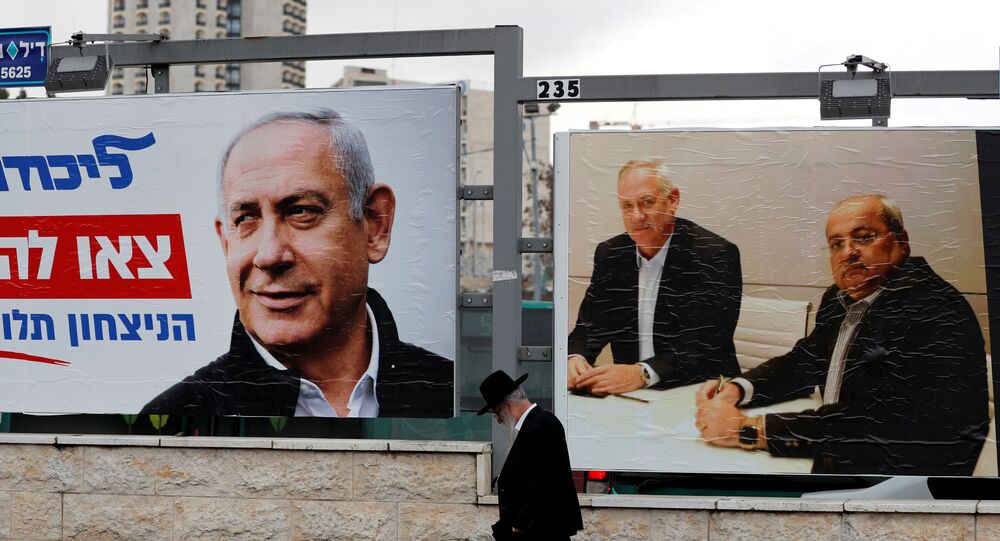 Despite the fact that Israeli Prime Minister Benjamin Netanyahu has been indicted on corruption charges, his Likud party is expected to tie with Benny Gantz’s Blue and White Party during Monday’s election, the country’s third since April 2019, David Sheen, an independent writer and filmmaker, told Sputnik.

The latest election polls published Friday reveal that the center-left political coalition, led by Blue and White, and the Likud-led right-wing bloc are predicted to tie at 33 Knesset seats each, meaning they will fall short of the 61-seat majority threshold necessary to form a government.

In a desperate effort to gain seats in the Knesset, Netanyahu has tried to make deals with smaller Israeli political parties. In late February, the prime minister raised eyebrows when he attempted to get two far-right political parties, Jewish Home and Jewish Power, to merge. The groups have long supported violence against Palestinians and the expulsion of Arabs from the contested territories as well as Israel. According to the Times of Israel, Netanyahu has urged right-wing parties to band together to increase the number of seats right-wing parties will get in the Knesset and to prevent independent factions from taking votes away from right-wing allies.

Sheen told Loud & Clear hosts John Kiriakou and Brian Becker that Netanyahu had approached Jewish Power leader Itamar Ben-Gvir, “saying, ‘Hey, I’ll give you a million dollars and I will secure seats for you within my party. We’ll fuse our two parties together.’ That, to me, is beyond scandalous. This is a new level of scandal.”

“Netanyahu is reaching everywhere he can to scrape a seat or half a seat from every direction, even if it means reaching out to the most unlikely, to the most far-extremist factors in the election,” he said.

Netanyahu on Sunday also said that his government is looking into legalizing marijuana for recreational use - a move that Sheen believes is in an attempt to gain support ahead of the election.

“Maybe it will give him one extra seat here, one extra seat there. But even with all of those seats put together, he still doesn’t have 60 … So, the truth is, we are probably looking at fourth elections,” Sheen speculated.

In January, Netanyahu was charged with bribery, fraud and breach of trust in three corruption cases, which means he will likely continue to struggle to form a right-wing majority coalition.

“Netanyahu is still charged with corruption crimes, serious corruption crimes, and this is the main reason that the power brokers on either side of him aren’t willing to sit with him in a government, are denying him those extra seats he needs. In recent days, other ministers in his government have also been named in corruption cases,” Sheen explained.

In December 2019, the Israeli Cabinet approved United Torah Judaism leader Yaakov Litzman’s elevation to health minister. According to the Guardian, Liztman is accused of interfering in the extradition case of Malka Leifer, an Israeli-Australian citizen who is being accused of child sex abuse at a school in Melbourne, Australia. Litzman is alleged to have forced psychiatrists to change their reports on Leifer so that a court would find her unfit to stand trial over the charges, the Times of Israel reported.

“This health minister is accused of helping cover up and allowing this person [Leifer] to stay in the country and prevent them from being extradited back to Australia to face charges for these rapes,” Sheen noted.

In fact, Sheen believes there’s a cult-like support of Netanyahu in Israel.