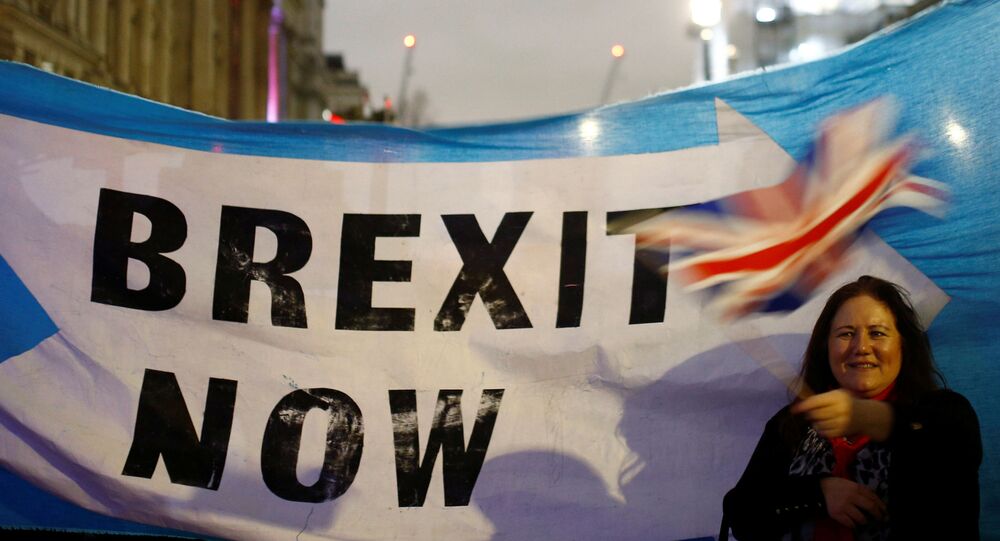 Johnson Has Strong Hand in UK-EU Trade Talks, May be Quietly Preparing for 'No-Deal' - Scholars

While The UK-EU trade talks are due to kick off on 2 March, UK Prime Minister Boris Johnson has already warned Brussels that he would halt the debate and exit from the transition period if the negotiations have not borne fruit by June. British observers suggest that the UK is cruising directly towards a no-deal scenario.

The British government made it clear on Thursday that it is seeking a Canada-style trade agreement which would ensure "financial stability, market integrity, and investor and consumer protection for financial services, providing a predictable, transparent, and business-friendly environment for cross-border financial services business".

Earlier this month, EU's chief Brexit negotiator Michel Barnier said that the Canada-style deal was not on the table. His notion triggered sharp criticism from the UK which accused the bloc of hypocrisy recollecting that Barnier specifically promised "a looser relationship, similar to Canada's with few tariff barriers and few regulatory obligations", as The Telegraph outlined in its article eloquently titled "The sclerotic EU cannot move the goalposts now".

Explaining the controversy over the Canada-style accords Ben Williams, a tutor in Politics and Political Theory with the University of Salford outlines that "the objection the EU has is saying that Canada is located in a different geographical area, in a different part of the world while Britain is right on the doorstep of the EU". If Britain no longer embraces EU standards and regulations, it could emerge as a serious competitor to the EU, according to the academic.

In 2017 the EU showed on their own slide that a Canada type FTA was the only available relationship for the UK. Now they say it’s not on offer after all. @MichelBarnier what’s changed? pic.twitter.com/ve8zeAqbSZ

​The EU's agreement with Canada, commonly known as the Comprehensive Economic and Trade Agreement (CETA), entered into force provisionally on 21 September 2017. It eliminated most of the tariffs on goods traded between Canada and the bloc. However, from Brussels' standpoint, the UK and the EU tend to trade more from being closer to each other.

Both geographical proximity and longstanding trade relations between the UK and the EU increase the importance of "level the playing field" arrangements, i.e. a set of common rules and standards on environment, labour, taxation and state aid.

Andrea Trunzo, a UK-based economist, argues Britain's approach "seems fair, reasonable and without significant financial impact for both parties", because, first, the UK government paper stipulates: "commitments not to weaken or reduce the level of protection afforded by labour laws and standards to encourage trade or investment".

Second, upcoming changes in technology, in society and the economy "will require a whole set of new standards", he says, stressing that because of that "it's critical to retain regulatory autonomy from the EU".

"The UK wants to achieve a commitment not to lower the current standards while preserving its sovereignty and regulatory autonomy in the future", the economist explains. "It's like setting the bar now but without being necessarily bound by the EU's legislative process forever. If the EU changes its standards in the future, the UK may choose to stay aligned, but there is no obligation to do so. Based on this assumption, significant changes in the short term or mid-term are very unlikely".

'Johnson is Stronger Than Before'

Meanwhile, PM Boris Johnson is confidently pushing ahead with the idea of a "regulatory freedom" from the bloc. One might ask whether the prime minister has enough cards up his sleeve to assert Britain's rights and interests in a dispute with the EU.

"[Johnson] is obviously in a stronger position than he was because before Christmas he was leading a minority government and subsequently he has won an election", says Ben Williams. "He has got a majority now in Parliament, and this vast majority with are supporting what he is trying to do".

The academic highlights that nevertheless, there is a dispute as to whether Johnson has a credible plan or a deal that the EU will agree with.

Andrea Trunzo echoes the academic by saying that "after the recent Cabinet reshuffle, Boris Johnson is stronger than before". Still, he notes that no matter how solid Johnson's position is right now, Number 10 may face unexpected obstacles and challenges, such as the impact of the coronavirus outbreak.

According to reports, the British prime minister has been subjected to criticism over hesitating to hold an emergency meeting on the coronavirus issue. It is expected that he will address the issue on Monday. Several European countries have reported COVID-19 cases with Italy seemingly being hit the hardest.

'No Deal' is Slowly Taking Shape

Williams does not rule out that having released the UK's Approach to Negotiations, the Johnson government is quietly preparing for a no-deal Brexit.

"I don't think Johnson is publicly saying he wants a no-deal, but behind the scenes, I think there are moves among senior people to prepare for a possible no-deal [scenario]", the academic says. "It would not surprise me if a 'no-deal' happened because there is talk that the country may leave even earlier than planned".

Although a no-deal Brexit has always been a possibility, there is an established consensus among politicians, economists and people in the EU that this option would not be in the interest of anyone, the academic highlights. He adds, however, that the other school of thought asserts that Britain has a strong enough economy, and a stable political system to cope with a "no-deal".

It is believed that if the UK leaves the bloc without a deal, the country would automatically revert to World Trade Organisation (WTO) rules, which means that it would levy tariffs on some products traded with the EU. However, last year the UK government announced that in the "no-deal" case, 92% of imports from non-EU countries would tariff-free. For comparison's sake before Brexit, just 56% of imports from outside the EU were tariff-free.

According to Trunzo, in case of a 'no-deal' scenario, where the 'deal' would have been a free trade agreement (FTA), "the EU and the UK may sign technical agreements to avoid major disruptions".

"A question mark is what can bring the parties back to the table for a new round of trade negotiations", the economist highlights. "It could be a change of leadership, or it could be a matter of events redefining the respective objectives. Again, factors that originated outside the UK or even outside the EU can be game-changers".

There's yet another thorn in the EU's flesh, namely, the future of the bloc's budget. Starting in 2021, the EU budget will lose € 11 billion in annual payments as the result of the UK's exit, because Britain was the second net community donor after Germany.

"The EU will try to build the case for UK contributions to the EU budget, but I doubt they will succeed because the case relies on a deep integration, which has been ruled out by the UK. If the UK manages to close an FTA reflecting its current negotiating objectives, the EU won't be able to recover that amount of money", Trunzo elaborates stressing that the only thing the bloc could do is to "redesign the set of own resources".