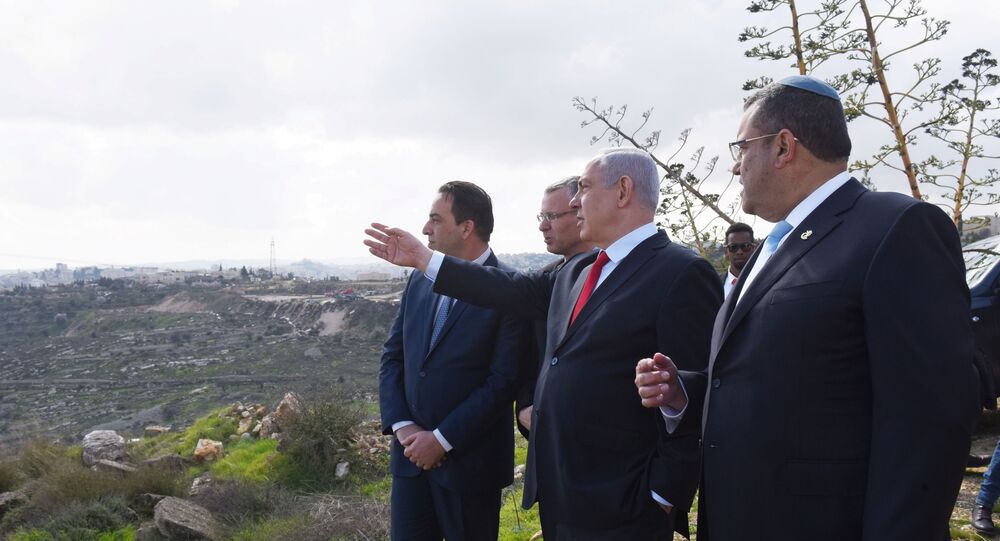 An expert tells Sputnik that Israeli Prime Minister Benjamin Netanyahu’s new plan to construct thousands of new homes in the E1 area of the occupied West Bank is not only an illegal move, but it will also foreclose the possibility of a contiguous Palestinian state in the region.

Tamara Nassar, associate editor of Electronic Intifada, joined Radio Sputnik’s Loud and Clear on Thursday to discuss Netanyahu’s construction plans in the E1 area and what further Israeli expansion into the occupied West Bank means for the Palestinians.

“Up until this point, Israel has received mild criticisms from the Obama administration, from the European Union, but it’s operating now knowing full well that the Trump administration is going to give its full support in its continued encroachment on Palestinian land.”

She argued that the so-called peace plan put forward by Washington “amounts to nothing but a permanent state of military occupation, apartheid and land theft from the Palestinians.”

While the Trump administration may support Netanyahu’s proposed construction, European Union Minister of Foreign Affairs Josep Borrell issued a statement over the weekend calling for Israel to “reconsider” its plans, as they may “isolate Palestinian communities” and “threaten the viability of a two-state solution.”

"Settlements are illegal under international law. The EU will not recognize any changes to the pre-1967 borders, including with regard to Jerusalem, other than those agreed by the parties,” he noted on Saturday.

Nassar emphasized that the E1 area is the last large open space between Jerusalem and the Israeli settlements of Ma'ale Adumim and Kfar Adumim.

“If this land is populated by more Jewish settlers, it would completely isolate the northern and southern parts of the occupied West Bank from each other, foreclosing the possibility of a contiguous Palestinian state,” she explained. “That would create an aisle of Israeli settlements from the Dead Sea to Jerusalem.”

Even though Likud and Blue and White are opposing political parties in Israel, they have the same ultimate goal, according to Nassar, which is: “to steal more Palestinian land” while avoiding criticism from the international community.

This criticism the Israeli government is attempting to avoid, she expounded, includes the International Criminal Court’s (ICC) investigation into Israel’s alleged war crimes. The Jerusalem Post reported that the ICC has given the Israelis and Palestinians until March 16 to respond to the allegations set forth by ICC Prosecutor Fatou Bensouda.

“In order for there to be a clear resistance movement that joins Palestinians from the occupied West Bank and Gaza and inside of Israel, there needs to be some kind of going beyond the Palestinian Authority,” she said.